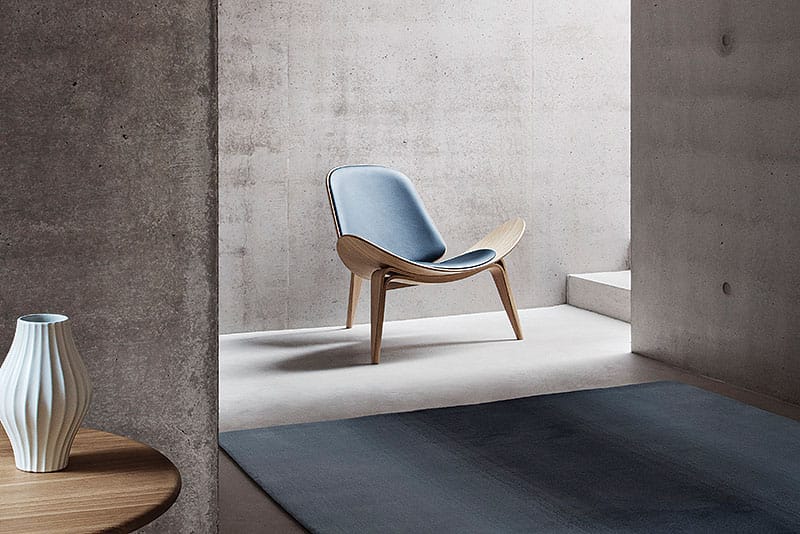 You might say antique dealer Jes Pedersen really worked his way up from the bottom. The tall, fit 75-year-old Dane and former Navy SEAL, would scuba dive in frigid Copenhagen Harbor after he got out of the service, exploring its numerous 18th and 19th century wrecks. The nautical treasures he brought back to the surface established him in the antique business.

Now the owner with his wife, Judy, of JP Denmark, on Perez Road in Cathedral City, Pedersen began shipping containers of antiques, mostly 19th century pieces, to the U.S. in 1977. Mostly, the couple dealt in wholesale furniture in the Los Angeles area. In the early 2000s, as interest in midcentury modern began to pick up steam in Palm Springs, Pedersen cautiously imported a few Danish furniture pieces while Julie specialized in small items such as vases, art, or lamps.

“All of a sudden it started escalating and it became big business,” he says, shaking his head at the intense resurgence of interest in Danish design. “The last time I was over there a half year ago, I really tried to put a whole container together. I was driving … 500 kilometers a day from town to town. I knew all the guys. I normally called them ahead of time, but they’d say, ‘nothing is left.'”

Judging by Pedersen’s showroom, it’s difficult to tell — there are Poul Henningsen PH5 lamps hanging every few feet from the ceiling, a few pieces that look like Hans Wegners, and there might even be an Arne Jacobsen chair or two. But Pedersen laments that it is a far cry from the days he could drive around the little country of 5 million and fill container after container.

Until just a few years ago, Danish modern had an undeservedly iffy reputation. During the height of its global popularity in the 1950s through the ’70s, cheap knockoffs flooded the market. The clean, Shaker-like simplicity was replicated by the Danes’ competitors in cheap pine and polyester fabrics. The life expectancy of such shoddily made products was commensurate with the low prices. By the mid-1970s, Danish modern furniture became synonymous with the piles of flimsy, blond-wood junk that went unsold at lowend garage sales. 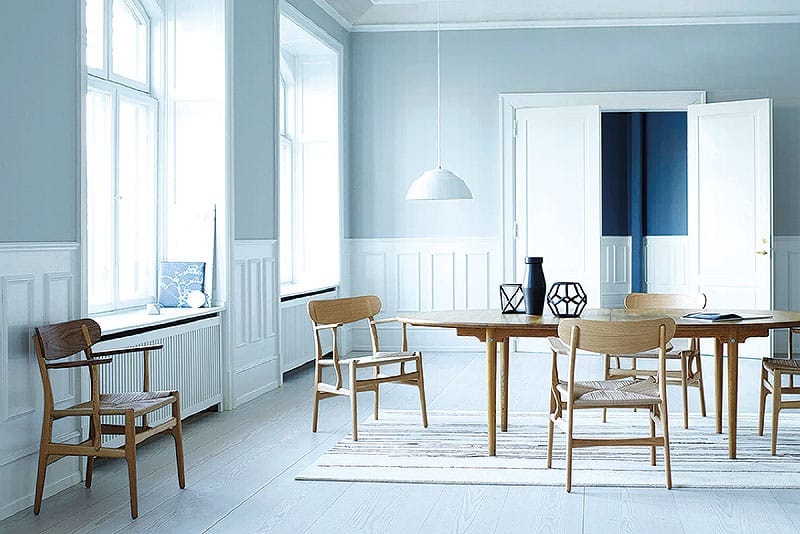 The irony is that althought every Danish designer (and more than 500 were active between 1930 and 1980) would have been horrified by the quality of the imitators, they would have been delighted that their designs had found a way into every strata of society. The egalitarian Danes (and Swedes) almost uniformly believed that good taste belonged to everyone, not just the wealthy. Global furnishings giant IKEA wasn’t created in a vacuum; it is part of a tradition that believes every household on Earth should be able to attain domestic comfort that is simple, graceful, tasteful, practical, and affordable.

In the best English language book on the subject, Danish Modern, author Andrew Hollingsworth points out that the antecedents of Danish modern design gathered momentum in the late 19th century because of the “demand for furniture for the expanding middle class. … During this period theorists in Scandinavian countries were beginning to reevaluate issues of national identity as well as to recognize the need for social equality.”

Similar movements took place in Britain and the U.S. in the late 19th and early 20th centuries and produced the craftsman furniture movement. It, too, was fueled by the notion that simple, tasteful design belonged in every household. Clearly, craftsman designers were heavily influenced by Shaker design, although Hollingsworth says the same parallel can’t be made between Lutheranism and the early Scandinavian designers. Hollingsworth, in fact, points out that “the Danes were able to develop a style that paid homage to the (ancient) Greeks, Egyptians, Chinese, English, Spanish, and Shakers while incorporating the Scandinavian ethos and remaining true to modern needs and uses.”

Although it might be tempting to hold the image in one’s head of a severe, straight-edged, no frills, utilitarian, rectangular table as a generic example of Danish modern, the fact is, there is no prototypical Danish aesthetic. For every square, teak Mogensen modular dresser, you have a whimsical Jacobsen Egg Chair or Asian-influenced Wanscher armchair or Kaare Klint’s famous airplane stool based on an ancient Egyptian design. 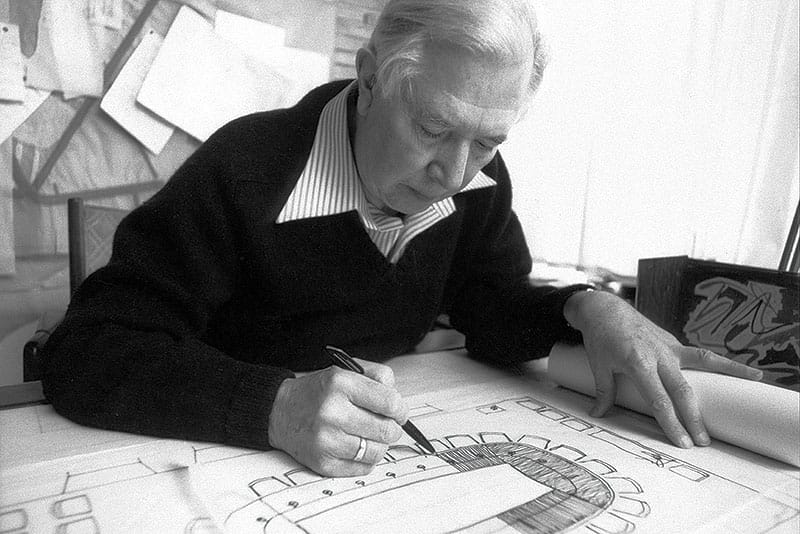 Many of the designs originally drawn by Hans Wegnerare available today in the materials he intended, but very few are still made in Denmark.
Photo courtesy Carl Hansen & Son

Jes Pedersen says that the most important moment in the development of Danish design occurred in 1924 with the appointment of Klint as the professor and chair at the Royal Danish Academy’s new Furniture Department. In the years leading up to World War II, Klint rigorously trained a generation of designers and cabinetmakers who would fan out across the globe following the war, spreading the Danish modern gospel. The Danes — long a seagoing, trading nation — were nobody’s fool when it came to drumming up business for the new national No. 2 export (ham reigns supreme). New York became the North American headquarters for design giants such as Georg Jensen, and specialty shops such as George Tanier and We Moderns carried the emerging greats such as Borge Mogensen, Hans Wegner, Arne Jacobsen, and Ole Wanscher. In a brilliant bit of global marketing, airline giant SAS furnished its worldwide network of hotels exclusively with Scandinavian designers. It was here that Arne Jacobsen’s Egg Chair soon became as famous and as symbolic of the modernist movement as Charles Eames’ lounge chair.

Poul Henningsen, whose PH5 and Artichoke lamps were ubiquitous fixtures in SAS hotels and many northern European homes, famously commented, “Let’s not get dizzy from success. The [increase in] exports is rather due to the fact that the Nordic taste suits a social stratum that is able to buy aboard … mainly because it is fashionable and they are snobs. Our democratic style has become comme il faut …” 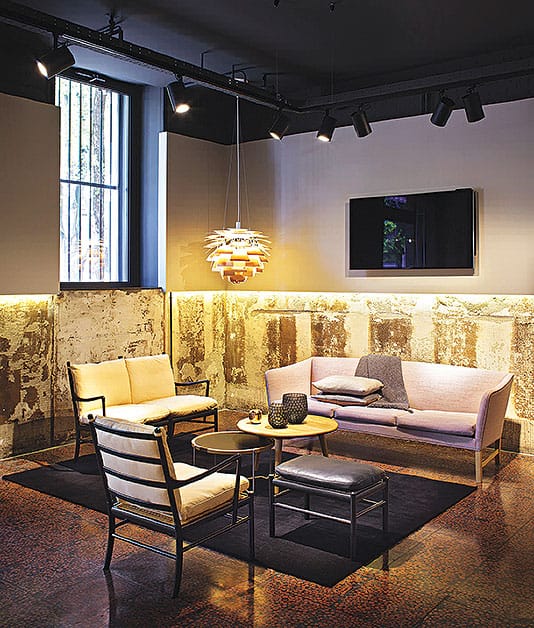 Pedersen says that except for a handful of companies, the once mighty Danish manufacturers went out of business. Even though only a decade or so stands between Danish modern’s decline and rebirth, it no longer makes financial sense to train a new generation of craftsmen and retool the factories. Pedersen says you can certainly buy a new Wegner sideboard or Mogensen school chair No. 121, and you might even find it in the wood intended by its designer, but more than likely, it will have been manufactured in China or India.

As for finding the real deal, Pedersen says every year the best pieces become increasingly scarce. He blames Danish television. Several years ago, a Danish version of Antiques Roadshow specializing in Danish modern furniture became very popular. Part of the show’s premise is a televised auction of pieces brought to the studio. Pedersen said that suddenly every Dane seemed to be running to the TV studio to sell grandma’s Finn Juhl table. He laments that hundreds, maybe thousands of pieces have thus been sold to “Japan, Taiwan, Canada, America, other European countries …

“Do you know where it is most difficult to find great, authentic Danish modern furniture?” he asks with arched eyebrows. “Denmark.” 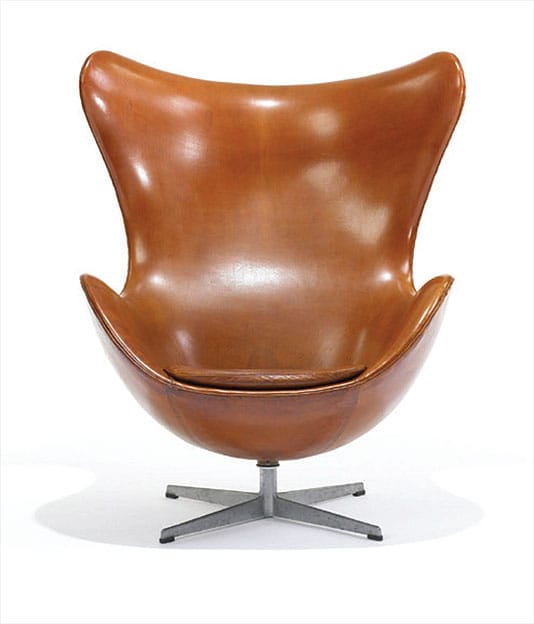 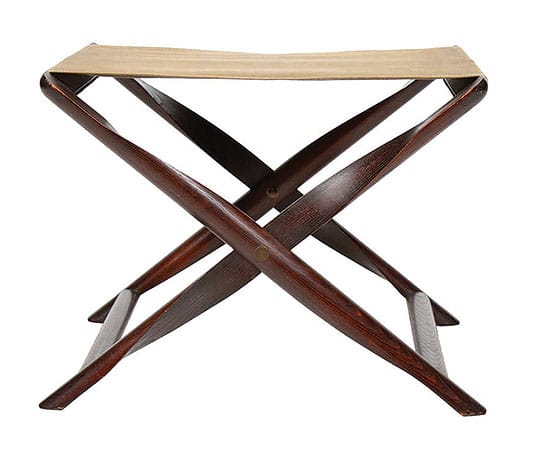 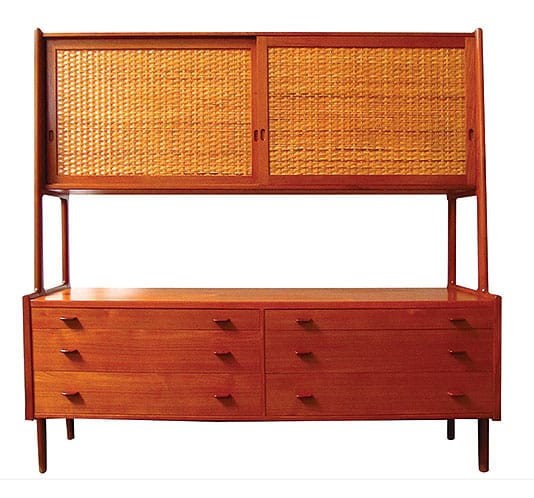 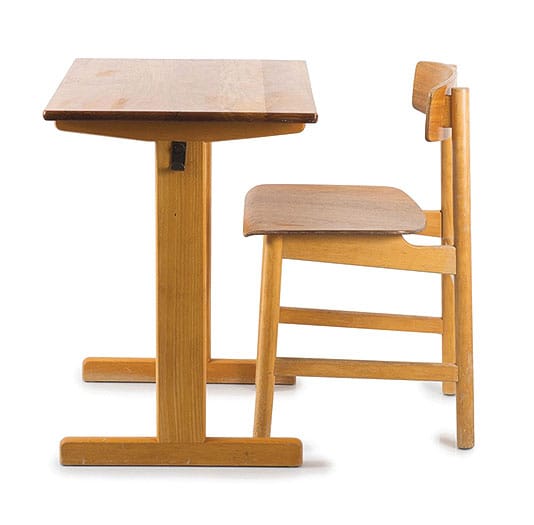