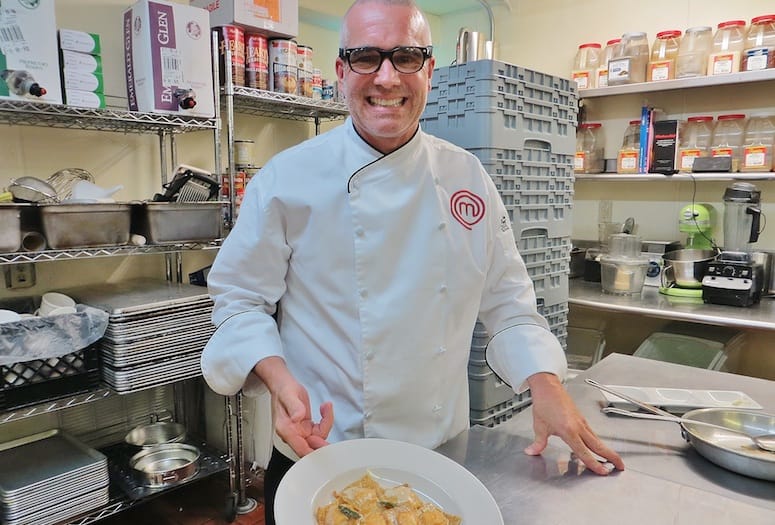 Fresh from a top-three finish on Fox Network's MasterChef, Chef Stephen Lee has come home to Palm Springs to make his own mark on the local food scene.

He will start Oct. 13 as Guest Chef for “Foodie Tuesday,” a series of multi-course dinners hosted every second Tuesday of the month by Executive Chef Jennifer Town at Purple Room Restaurant and Stage in Palm Springs.

Chef Stephen will feature an “Early Fall Harvest” theme in a three-course offering priced at $45 per person. The menu will be “a celebration of local pumpkins and winter squashes, utilizing local ingredients,” Stephen says. His culinary background includes stints in restaurant kitchens to make a living while pursuing a music career in Punk Rock in the Seattle area in the 1980s. He then went into farming, operating on a communal land trust as an organic farmer, bee keeper, and worked for a business that made medicinal salves, soaps, and candles.

Since moving to the Palm Springs area 12 years ago, he has worked with local farms and as a gardener, building raised beds and showing people how to grow their own food.

After attending an open casting call for MasterChef in San Diego, he was selected to advance to the next level in Los Angeles, and then ultimately made the cut to the top 40, who competed in Season 6 this past summer. His top-three finish on MasterChef has given him a platform to share his strong commitment to organic, locally produced food and spread the word about the Palm Springs “revitalization for foodies.”

He wants to let people know that “Palm Springs is growing into a foodie city that is forward-thinking about organic, sustainable, local foods. It is becoming a hot-spot on the food scene.”

In addition to restaurant and other food festival appearances, Chef Stephen has his sights set on operating a food truck based in Palm Springs. He has registered a truck with Riverside County under the name Field Trip. His mission is to utilize ingredients from local farms to bring food made from scratch to the public, “farm to fender.” While regulations in Greater Palm Springs currently prohibit food trucks outside of registered public events or private bookings, he hopes to take Field Trip on the road to areas that allow trucks and to large festivals in the area such as Coachella and StageCoach.

Until then, you can taste the MasterChef finalist’s fall fare on Oct. 13. Monthly Foodie Tuesday dinners at Purple Room Restaurant and Stage rotate through a variety of themed menus, many paired with wine and/or spirits. Executive Chef Jennifer Town creates the menus along with some dinners being curated by Guest Chefs.

The Early Fall Harvest dinner will include an option of suggested wine, beer or cocktail to pair with each of three courses for an additional $20 for all three courses or $8 per course. Pumpkin Ravioli paired with Osso Bucco will be the entrée course for the Early Fall Harvest Dinner. Locally sourced Cinderella pumpkins will be featured in hand-made ravioli sautéed with brown butter and sage, and topped with shaved cheese.