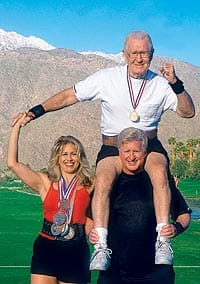 When a 16-year-old Jack Kress saw a man benching press at a YMCA, he thought he must have been watching the strongest man in the world. Now, Kress could be the strongest 75-year-old in the country and … who knows?

Now making a living as a sales representative for Esser Air Conditioning and Heating, Kress last set a world record for his age (64) and weight (220 pounds) with a 451-pound dead lift in 1994.

Although he made his own dumbbells out of pipe and bricks when he was 14, became intrigued by Charles Atlas ads in magazines and began weightlifting regularly by 16, won the Mr. Kansas City (Missouri) bodybuilding contest at 22, and owned his own gym in Laguna Beach at 23, Kress took up powerlifting when he was 40 years old.

“Powerlifting is a separate from bodybuilding,” he explains. “You concentrate on a particular group of lifts and building muscles for those lifts.”

He began competing in 1977 in Colorado. Lifting in the 55-to-59 age group and weighing between 210 and 215 pounds, Kress set most of the state records for his age and weight. “I got into national meets and couldn’t do that well,” he says, though not doing well for Kress meant placing second or third. “So I joined the drug-free association. Then I started winning meets,” he says. “I did my best at age 59.” His best was a combined 500-pound squat, 350-pound bench press, and 518-pound dead lift.

Kress enjoys the solitary nature of the sport. In tennis, he notes, you’re playing against someone. In golf, you’re usually playing with someone. “I can go [into the gym] at a minute’s notice,” he says. He trains at the fitness room at Outdoor Resorts, where he lives, three times a week, and keeps a log to spur his self-competitiveness. He constantly tests himself by adding five pounds to a bench press or doing a few more repetitions.

“At 75 years old, it gets a little tough to work up to a meet,” he says. “I start training 12 weeks ahead of time and try to reach my peak at the time of the meet.” One day a week, Kress only dead lifts, the heaviest of the powerlifting repertoire. “It’s all back and legs,” he says.

“They assume I am going to be some sort of ‘beefalo’ or Sasquatch,” she says, explaining that most people equate powerlifting — in which the legs and back do the work — to bodybuilding and noting that perhaps the best powerlifter in the world is 60-year-old, 120-pound Hideaki Inaba of Japan.

Meshkov became a powerlifter 10 years ago after knee surgery made necessary by a combination of genetics and constant step aerobics, which she taught. One of her training partners during the rehab process had been a national powerlifting champion. Having lifted weights “just for fitness” while in college, she impressed him with her powerlifting potential.

“He said, ‘Sasha, you’re pretty strong. Why don’t you try it?’” she recalls. After competing in regional competitions in Colorado, where she lived at the time, she proved her mettle in state competition, winning her weight class in 1995 and the overall women’s title in 1996.

After moving to California and winning the 2003 overall women’s state championship, Meshkov underwent further knee surgery. Then, to “check out” the results, she went to the Arizona state championship last October. There she took three medals: a gold in her weight class (148 pounds), a gold in the women’s masters overall, and a silver in the women’s overall competition with a 342-pound squat, 155-pound bench press, and 347-pound dead lift.

“I like the training. I like the discipline. I like the exercise science part of it — the biomechanics and how the body works,” Meshkov says. “I like the feel of moving really heavy weight.” She also enjoys the challenge of improving. “I hate status quo,” she says. “That just makes me crazy.”

“My strength is in the legs and back, and most men train for their chest and biceps,” she says. “It’s kind of sad, because the legs are the biggest muscle group, and everybody needs to train their legs.”

Don’t Try This at Home

The director of spa operations at Desert Springs, a JW Marriott Resort & Spa, in Palm Desert once tried to single-handedly hold back a twin-engine turboprop plane from accelerating on a runway. For a segment on ABC Television’s That’s Incredible, Bruce Taylor was put to the task with nothing more than a 100-foot rope and starting blocks to brace his feet.

“I could pull the plane back with one prop going; but when the second prop kicked in, there was no way,” he says.

Taylor was more successful at lifting weights, an interest he developed while teaching physical education instruction at Pierce College in Woodland Hills in his early 20s. He and two other coaches began weight training at the suggestion of the college athletic director. “We started lifting three days a week,” he recalls. “And after about four or five months, I was the only one still working out.” There were powerlifters in the gym, however, and Taylor started training with them.

But in 1979, Taylor also began competing as a bodybuilder and, after winning the Mr. South Bay and Mr. Southern California titles, his enthusiasm for powerlifting waned. Simultaneously pursuing the two disciplines created a challenge.

Taylor won the North American Bodybuilding Championship, Superbowl of Bodybuilding, Mr. Ironman, and Tournament of Champions titles. His last powerlifting title came in 1984 when he won a San Fernando Valley bench press contest with a lift of 440 pounds.

His most difficult feat of record, however, came in the form of another television show, The Guinness Games, for which he was scouted at a powerlifting competition. Taylor and a fellow powerlifter, with the aid of two “side spotters” set a world record by carrying a filled waterbed bag weighing 1,200 pounds a distance of 30 feet in 26 seconds.

‘“We were lucky,” Taylor says. “Water goes where it wants to go.”

Ready to Press On

Although Taylor no longer participates in powerlifting competitions, he has offered training and technique tips to Patrick Marchesson, a 31-year-old stylist at the Desert Springs spa who took up the sport less than a year ago. In December, Marchesson won his first time out in the 148-pound class at the Amateur Athletic Union competition in Laughlin, Nev., with a dead lift of 402 pounds. With that success under his belt, he is adding the bench press to his repertoire.

“I knew one thing was that I was ready,” he says. “I put all my heart in it, because I was there to win.”

Ryan Stewart, a 26-year-old massage therapist at The Lodge at Rancho Mirage and a personal trainer at Indian Ridge Country Club, also is converting from dead lift to dead lift and bench press. In the same Laughlin competition, he won his weight class (275 pounds) for the dead lift (567 pounds).

“All the pain and sore muscles that you get each day working out in the gym is all worth it when you go to one of those competitions and win,” he says. “It really means something.”