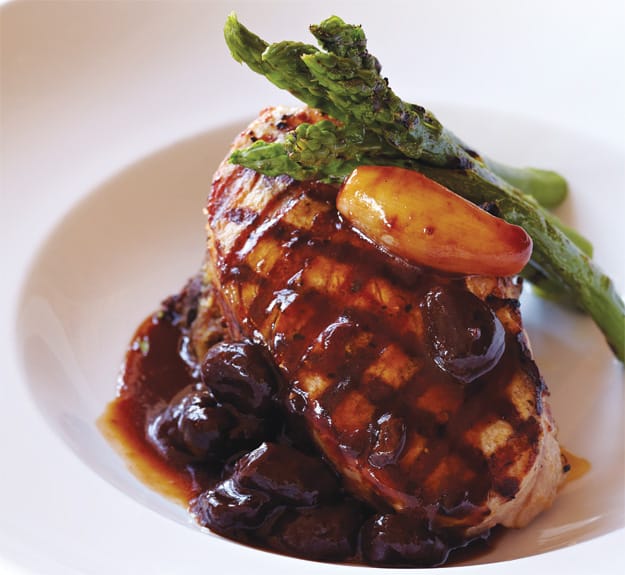 Cinnamon chocolate pudding coated my mouth like luxuriously edible velvet. It was the richest, creamiest form of sweetened chocolate I’d ever tasted (and that includes a trip to West Africa, the source of most of the world’s cocoa).

Michael Estrada, the chef of downtown Palm Spring’s Matchbox restaurant, looked at my face and laughed. “It’s made with pure cocoa powder,” he said. “I added avocado for texture and some organic agave syrup for sweetness. Pretty good, eh?”

I couldn’t reply. My mouth was busy with a second bite, then a third. If this was the paleo (a.k.a. “caveman”) diet, sign me up.

The paleo diet is based on a pre-agricultural notion of what hunters and gatherers ate in the wild. It emphasizes the natural ingredients humans evolved to optimally digest during most of our existence on Earth, before the first agricultural revolution about 10,000 years ago. The paleo diet surfaced in the mid-1970s, but has leapt into the mainstream recently with several high-profile guides and cookbooks. The converted boast of greater vitality, effortless weight loss, and lack of diseases created by “civilized diets” of manipulated grains,
domesticated meats, and processed foods.

“Creating a paleo menu is challenging since there are many culinary staples that are ‘forbidden fruits’: flour, rice, legumes, dairy, corn, barley, wheat in any form (things like soy sauce have wheat), potatoes, all processed foods,” Estrada says. “We’re trying to compose a menu that is satisfying, creative, and in certain cases tricks you into thinking, ‘Wow, this is paleo?’”

Even before the chocolate pudding served with coconut whipped cream, Estrada had me at the wilted spinach salad with warm apple bacon dressing, grilled chicken, and jalapeño sausage. Next on my $25 prix-fixe menu was a pepper-crusted flat iron steak with roasted carrots and asparagus, with by far the best cauliflower mash my tongue had ever met.
Better known for its gourmet brick-oven pizzas, Matchbox is gaining a loyal following for its bistro menu and the once-a-month paleo-diet nights, which began in July.

Estrada was introduced to the paleo diet when he became involved with CrossFit Palm Springs, a multidisciplinary fitness center. On any given “paleo” Wednesday night, you’ll find the upstairs eatery full of jocks and jockettes guiltlessly munching on gourmet items like ahi tuna tartare with crisp yucca chips, honey garlic sauce, and wasabi oil.

“Michael’s version of paleo hits it out of the park,” says T.J. Morgan, a CrossFit certified trainer. “He shows how delicious and creative paleo ingredients can be.”