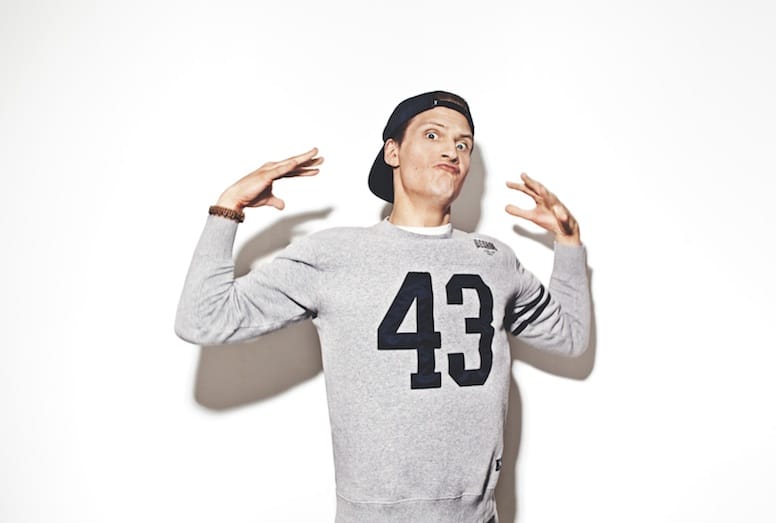 Go big or go home: It’s a motivational saying that hopes to inspire people to do greater things.

In the case of 24-year-old Norwegian DJ Matoma, going home isn’t in the cards, and going big — or rather, B.I.G. — is actually his forte. The reason?

Matoma has made a major splash with his tropical house remix of the late rapper Notorious B.I.G.’s Old Thing Back, which has garnered a staggering 73 million Spotify listens (and counting). “It’s the most played and the most popular DJ song, which is quite unique,” Matoma says. “I wanted to keep the legacy of the greatest rapper of all time alive for the young kids, because the hip-hop they’re listening to today doesn’t have the same heart.”

Matoma (born Tom Stræte Lagergren), who plays Splash House on Aug. 8-9, discussed his fascination with California, his melody-inspired remix style, and what his plans are for the Palm Springs event. Matoma will make his first trip to Palm Springs for Splash House.

What have you been doing while you’re here?
“We went water skiing and jet skiing, and that was a lot of fun. Water skiing I had done before, but not jet skiing. It was really cool.”

Have you ever spent any time in Palm Springs before?
“I’ve never been to Palm Springs, no. I’m really looking forward to it. A couple of my friends from Norway are coming over, and they will be coming to my show. I’ve heard that Palm Springs gets really warm. I also heard that people playing their sets on computers can have a difficult time because the computers can crash. I don’t know if that’s true or not.”

Have you thought about your upcoming Splash House set yet? I’m sure seeing all these palm trees is the perfect setting for working on a tropical house mix.
“Hah hah, yes! (laughs) I have thought about what I’m going to do there. I always try to mix everything up in my set, and have a story going — a rollercoaster where it is up and down, both tempo and mood. As long as the vibe is good and the people are feeling the music, I’ll be playing everything from hip-hop to tropical to beat to future house. The set also depends on the crowd and the atmosphere of the room.”

You’ve done so many remixes over a number of genres — do you have any dream remixes you’d still like to do?
“I’d like to do a mashup of all the great hip-hop songs of the 1990s, like Snoop [Dogg], Dr. Dre, Ice Cube, Xzibit, Warren G. I’d do a crazy, 10-minute mashup. I think that would be sick.”

I like that idea! Can you have that done and ready in time to debut at Splash House?
“Yeah, maybe I will bring some new beats to that event. (laughs)” Matoma: “I think people like to listen to my remixes because they almost sound like an original.”

Your have an interesting style because of your music school background. You understand how to respect a song’s melody and vocals before you do your thing with them.
“Yes, because when I do a remix, I consider the original and what I want to keep. For example, with Old Thing Back, I didn’t f— with the lyrics because I have too much respect for Biggie [a.k.a., The Notorious B.I.G.]. When I’m remixing a new artist, it’s OK to play with the lyrical part, but you should still have respect for the original and complement the original vocals and the production.

“I always like to try out new melodies, but at the same time, I always have it in my head that I should try to complement the vocals as much as I can. I think people like to listen to my remixes because they almost sound like an original.”

That’s a good point. If you don’t know the original for the Eminem track [Business] or Jay-Z track [Roc Boys] you did, it’s almost completely new to the ear. That’s the mark of a good remix. It can’t be exactly the same, but it can’t be too far out there.
“Yeah. There’s a level of new producers out there today who take the vocals and just chop them up and try to do hip-hop stuff, but it’s not on beat or on point, and it’s also in the wrong key. So they fail at doing a good remix because they try so hard to make a good production, but they don’t consider the vocals. Vocals are 70 percent of it. Whether you’re doing a remix or an original, you always have to consider the vocals. That’s the main part in the song.”

Did you ever think you’d get to this point as a DJ, back when you started making bootleg tracks?
“No! And I have seen ignorant people on YouTube commenting about, 'How can you take a Biggie song and make it more famous than him?' That’s not the case! For me, I was listening to Biggie when I was 6 years old. His flow, his passion, his character, and his beats were so on point. He was the greatest guy ever in the rap industry. To die at the age of 24, with all that he had accomplished — I just wanted to do that remix in his memory and out of respect, and keep his legacy going for the kids today, because they’re listening to bad music.”

Any other plans for when you’re in Palm Springs?
“Well, I think we have to have a tropical drink together to celebrate Splash House.”

Sounds good to me. What will we be drinking?
“I really like the Brazilian drink, the Caipirinha. Have you heard of it? It’s made of Brazilian rum, cachaça, some kind of sugar cane, white or brown sugar, lime, and ice cubes. It’s really good. It’s almost like a Mojito, but not as sweet.”

I’m in! What’s the perfect song we should listen to while we’re having that drink?
“I have to say, maybe a song by Ice Cube, You Can Do It. You know (quotes lyric), ‘Put your ass into it!’ (both laugh)”