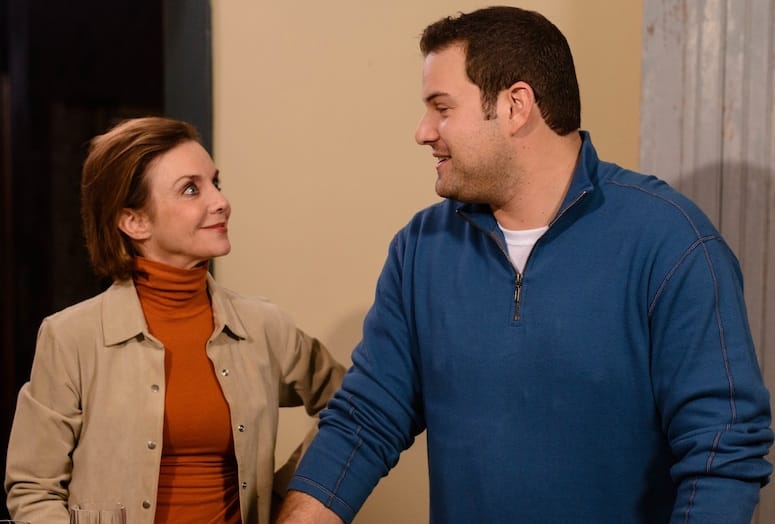 VIDEO: Max Adler talks about his quick rise in Hollywood and what that means in being sought for new projects.

His acting break came on Glee, which for the past five seasons has immersed us into the human dynamics of high school life through members of a glee club and its teacher.

And now with Saugatuck Cures, Adler has reunited with a former high school classmate, director Matthew Ladensack, to star in the lead-off film of Cinema Diverse: The Palm Springs Gay & Lesbian Film Festival Sept. 18 at Camelot Theatres. The film screens at 7 p.m. with an After Party at Hunters Nightclub in Palm Springs.

From there, moviegoers can take in 28 features films and 30 shorts over the next three days, Sept. 19-21, which includes a Saturday night screening of the mystery thriller, The Dark Place.

To Glee fans, they know Adler as the meany turned closeted gay guy Dave Karofsky, the football jock who harasses the show’s openly gay character (and also in real life), Kurt (Chris Coffer), before discovering his anger was founded in his own self-denial over his sexual orientation.

We last saw Adler (who is straight) in Season 3 when he attempted suicide, and who wound up at his bedside trying to help but Kurt.

As Glee is set to begin its sixth and final season, Adler has been brought back to catch us up on what Karofsky has been up to along with his interaction with Kurt and his boyfriend, Blaine (Darren Criss).

Adler has two other films coming out this fall, including Believe Me on Sept. 26 about four college who create a fake charity and embezzle the money followed in late October by 23 Blast, the true story of football player Travis Freeman, who lost his eye sight and returns to play the sport. And if that isn’t enough, Adler is also back for Season 4 of the TV series, Switched at Birth, which actually led to his most recent trip to Palm Springs to attend a wedding of a cast member.

Will you be coming to the film’s screening here?
“I am really trying. Right now, I’m scheduled to shoot Glee that day. There going to need me at night for some exterior shots and the location is kind of locked in. I might not be able to get there. If that is the case, I will record a video so the director can show that.”

What attracted you to Saugatuck Cures?
“(Director) Matt (Ladensack) and I had kept in touch since high school. He was a year behind me. He got this script produced and financed, and reached out to me to see if I was interested in playing either of the leads. I read the script and loved it. It has a lot to say about religion, sexuality, family acceptance, intolerance, values, very thought provoking script. It left me thinking for days after I read it, which is usually a good sign if it stays with me, plus I get to have my friend directing me. And I thought the movie was so smart because it dealt with all of those issues, but at the end of the day it’s a comedy.” You play an openly gay character in the film, Drew, who is trying to raise money to pay for his mother’s cancer treatment. His friend Brett (played by Danny Mooney) comes up with the idea of posing as ex-gay ministers offering conversions for homosexuals. Prior to Glee, had you ever played a gay character before, and what did you do to prepare for it?
"No, I had not played a gay character. It was really a combination of everything. I’ve grown up doing drama club, show choir, and theatre, and in that community there are a lot of gay friends. It was never really a second thought or issue for me. I was close to a lot of gay friends in high school, and they would vocalize their discomforts or their fears. I understood that world. But even beyond that, it was kind of more of an internal thing to explore the insecurities that we have as human beings. People walk around keeping a guard up and hiding things, and not feel real comfortable being their genuine self.”

You must be happy to be part of the final season of Glee. What does that mean for your character?
“I feel very fortunate to be back. It’s been quite a run on an amazing show. I had always wanted to know what happened to Karofsky after that suicide attempt. I know a lot of fans agreed. To get to see him back will be good for everyone. It’s been a rollercoaster with that character. I  definitely started out being the antagonist, the guy you hate at the school, the guy you hate when he comes on the screen, poor Kurt.  And then to see what he is going through, start to sympathize with him, feel for him, realize once the light is shone on his insecurities and his fears, you find you want to help him out of that dark time.”

Did you ever play football in high school?
“No. I wanted to. My parents wouldn’t let me my freshman year, and I got hooked on drama club and show choir and never looked back.”