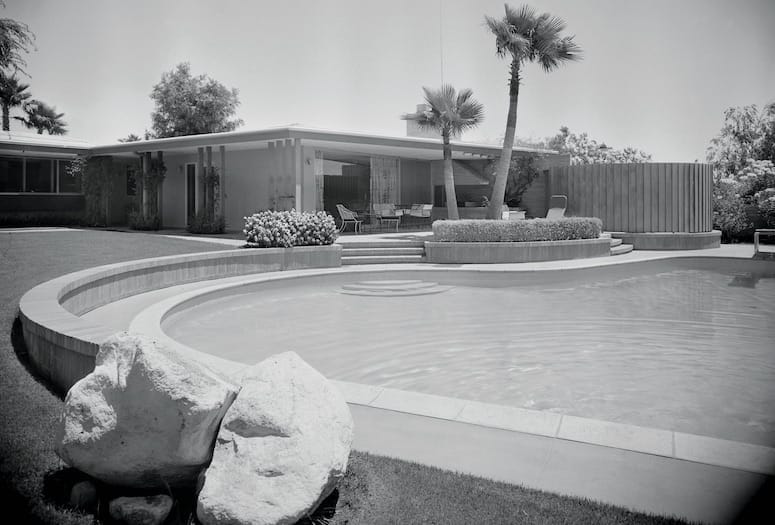 The E. Stewart Williams-designed residence of Preston A. Higgens, circa 1950.
PHOTOGRAPHS BY MAYNARD PARKER

Maynard L. Parker had a knack for making the ordinary look extraordinary, and the extraordinary look phenomenal. True, many of the homes he photographed exemplified all the taste and elegance money could buy. But his keen eye and open aperture also captured modest abodes, to consistently great effect. Parker’s work was artfully earthbound, never revealing the photographer’s tricks behind the photo and always leading the eye to what mattered. More than a thousand images in his decades-long career captured home life in Palm Springs and surrounding communities. Public spaces were also in the mix — hotels, restaurants, golf resorts, and shopping centers — all reflecting a casual, active, and smartly designed desert society.

As custom dictated, he staged the rooms for maximum allure, with pillows plumped and fresh flowers brought in. In shelter magazines, a field that flourished after World War II, the areas of the home were tastefully designed, beautifully lit, and largely unpopulated (though the odd vignette may depict a wife slicing an orange in half while her husband relaxes with pipe in hand). Even in empty rooms, though, a palpable human element prevails, a feeling that the host just left to fetch you a cocktail. The effect is the unlikely combination of pristine yet lived-in — a showplace, to be sure, but also a profoundly personal space. His images often had a “you are there” quality that ignited the dream of attainment. The look is inviting, seductive even, not overly fussy, and not without its beauty. Parker’s lens often revealed a space’s hidden glamour

Born in Indiana in 1900, Parker began exploring America by car in his early days, performing odd jobs and always, since the age of 17, photographing his surroundings. He entered many amateur photography contests, using a variety of aliases to grab up as much prize money as he could. He often received the top honors. In 1929, he succumbed to the irresistible pull of sunny Southern California and set up shop in Los Angeles, cutting his teeth at Mott Studios of Photography, which advertised “architectural photographs of general interest.” 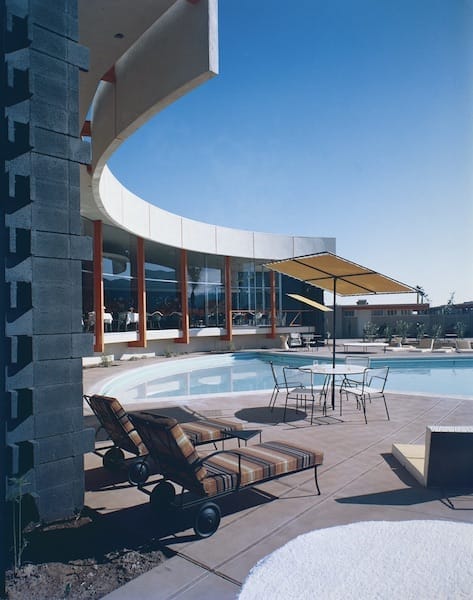 In editor Jennifer A. Watts’ book Maynard L. Parker: Modern Photography and the American Dream, writer Sam Watters takes special notice of Parker’s “cinematic expressiveness” in his prints. It is perhaps no coincidence that Mott Studios, a stone’s throw from Hollywood, would adopt the use of various innovations in motion picture lighting for their fine-art stills. At Mott, Parker watched and learned, becoming a master at using arc lighting and reflectors that would lend his images a touch of theatricality.

Parker was a member of a small fraternity of architectural photographers — Robert C. Cleveland, George R. Szanik, Ezra Stoller, and Julius Shulman — who seemed to instinctively know how to create intimacy and interest in their photographs. Shulman is the best known, his most famous work conveying unexpected and sometimes ethereal viewpoints. Parker’s work was defined by a more unembellished and straightforward composition, with sharp lines and high contrast. If, cinematically speaking, Shulman was the Jean Cocteau of architectural photography, then Maynard Parker was surely the John Ford.

The home magazine market became his target, aiming to elevate the quality of images seen on and between their covers. By 1938, Parker was commissioned to shoot Paul Flato’s jewelry store, with interiors by T.H. Robsjohn-Gibbings. Success quickly followed, and his recently established business, Maynard L. Parker Fine Photography (later renamed Maynard L. Parker Modern Photography), saw such an influx of clients that he hired four assistants. His annus mirabilis was 1940: He shot his first Cliff May ranch house, published his first story in Good Housekeeping, and built his own home and studio in L.A.’s Echo Park neighborhood.

Key to such a high-profile career was Elizabeth Gordon, who he knew from Good Housekeeping. 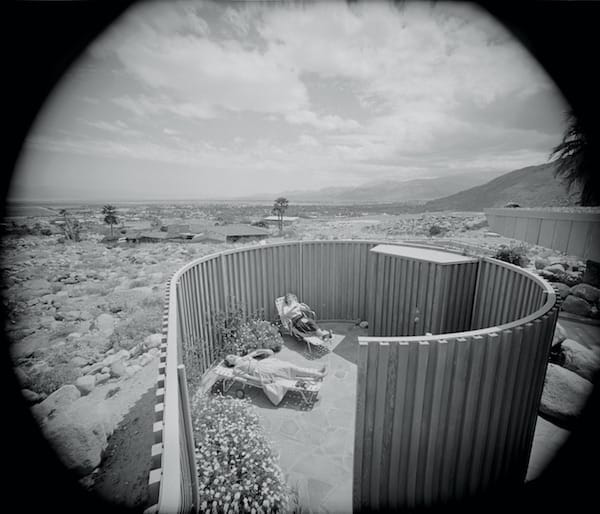 She became editor-in-chief of House Beautiful in 1941 — a position she held for more than two decades. Parker had a love of the outdoors and enjoyed scouting properties, a quality Gordon used to her advantage. Throughout, Parker and Gordon maintained a close, professional relationship. It could be successfully argued that they made each other better: Gordon gave Parker the platform, and Parker’s work elevated Gordon’s magazine. 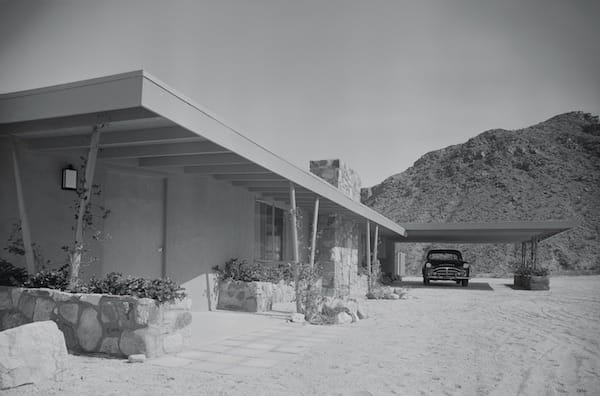 He was the go-to photographer for many architects and designers, and his list of subjects in Palm Springs reads like a hall of fame: James Dolena, Albert Frey, William Krisel, Wallace Neff, E. Stewart Williams, Paul Revere Williams, Arthur Elrod, Tom Douglas, and T.H. Robsjohn-Gibbings. He was especially close to May, who continued to hire Parker to photograph his ranch houses, with May often injecting himself into the logistics of the shoot. Similar to the Gordon-Parker dynamic, Parker boosted May’s visibility, which allowed May to popularize his signature ranch house style. 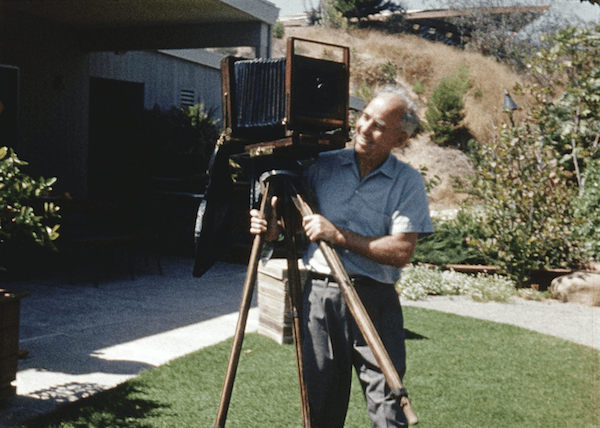 Maynard Parker  with one of his large-format cameras.

In 1956, Life ran Parker’s images of Robert McCulloch’s Thunderbird Country Club residence, which the magazine labeled a “push-button paradise.” McCulloch came from wealth, but made his own personal fortune manufacturing chainsaws and other tools. In 1963, he bought 26 square miles in Arizona that would eventually become Lake Havasu City and, five years later, bought England’s old London Bridge, which he had reassembled in Arizona as the town’s main attraction. But earlier, in 1955, he commissioned Welton Becket to make a fully automated home in Rancho Mirage. Its amenities, quaint in today’s world of smart homes, allowed for bathtubs to fill, curtains to open, air conditioners and lights to turn on and off, and music to be played, all at the push of the aforementioned button. There was even a poolside, motorized lazy Susan that rotated to allow for more even tanning of multiple sunbathers.

• READ NEXT: View the Stories in the February 2021 Issue of Palm Springs Life. 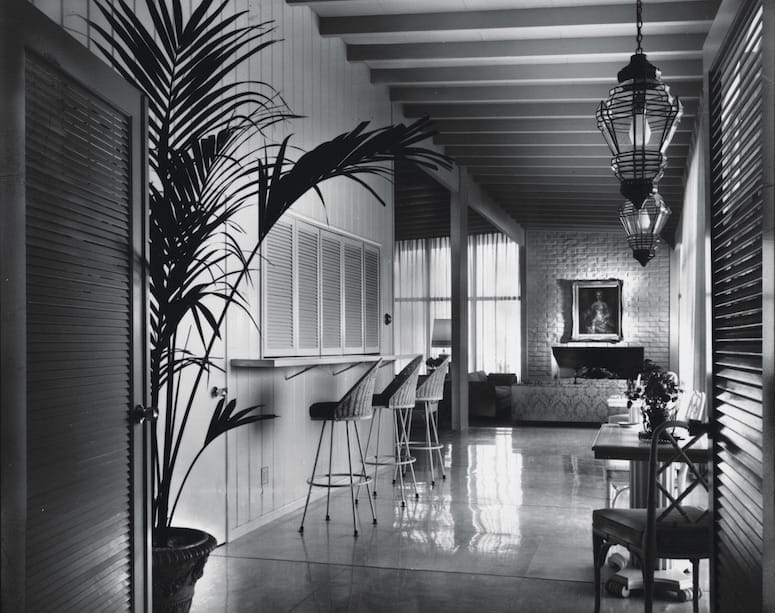 One of his most publicized home shoots came about in 1957 — the hillside residence of Thomas Davis, an heir to the Weyerhaeuser lumber business and owner of a successful Memphis-based wooden furniture business. One day, Davis’ wife, Dottie, noticed the shadows the trees were casting on the white marble of the house, and the property’s nickname, White Shadows, was born.

Parker shot an unusually large amount of film on this unusual home, defined by Moorish influences, a center court, thin columns, arched portals, walnut grilles, and interiors with gold, pink, orange, and yellow fabrics. With architecture by Eggers and Wilkman and interiors by Robsjohn Gibbings, the property was given a lot of ink in, oddly enough, both House Beautiful and, a few years later, Architectural Digest. It was uncommon, if not downright inconceivable, for one shelter magazine to share its assets with another, but there it is: in the Summer 1961 issue of Architectural Digest, a photo credit reads “Photographer, Maynard L. Parker, Courtesy of House Beautiful.”

“I think Parker’s pictures do wonderful justice to the architecture of the house, and in capturing the essence of the ‘white shadows’ and what it was like to live there,” says Carl Stibolt, Davis’ great nephew. “For me, the full effect of the house is best seen in the color pictures, as the decoration by Robsjohn-Gibbons was absolutely timeless.”

Shelter magazines boosted their sales by showcasing celebrity homes, a practice that further increased Parker’s visibility. In Palm Springs, that involved the homes of Walt Disney, Bing Crosby, Harpo Marx, Clark Gable, Al Jolson, Lily Pons, and others. Amid the dozens of homes Parker shot in and around the desert were also number of public spaces, including the Desert Inn, Thunderbird Country Club, Coachella Valley Savings & Loan, La Quinta Resort and Club, Bullock’s department store, Deep Well Ranch, and Del Marcos Hotel. By the late 1950s, in the pages of Architectural Digest, it was the Ocotillo Lodge’s turn to shine. 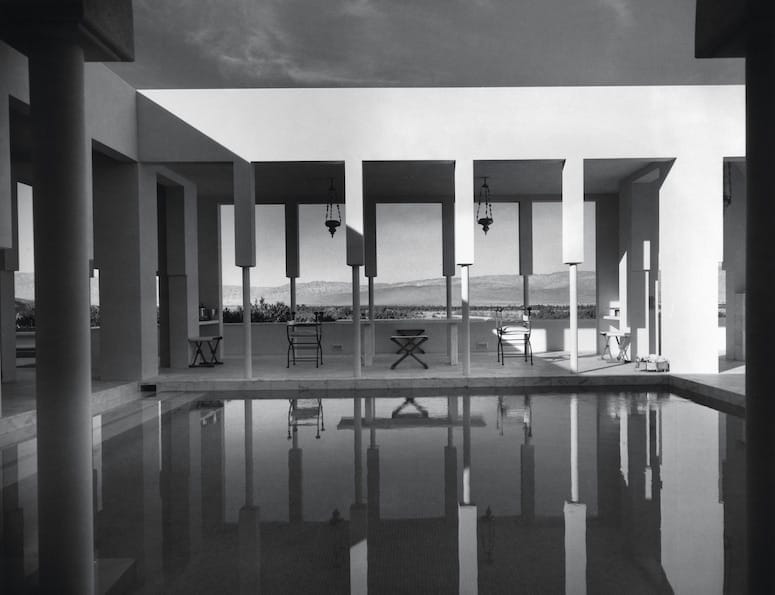 “Maynard Parker’s photographs of Ocotillo Lodge suggest what Watt described as a ‘kind of middle-class modernism,’” says Heidi Creighton, co-editor with Chris Menrad of William Krisel’s Palm Springs: The Language of Modernism. “This was exactly what developers George and Bob Alexander had in mind as they marketed the new neighborhood of Twin Palms directly behind the lodge … Parker’s photographs of the piano lounge in the Candlewood Room [advertised as one of the most beautiful rooms in America] not only illuminated the graphic shapes of Krisel’s design but also the elegance and intimacy of the space.”

In all, Parker’s work went on to grace the pages of House Beautiful, Architectural Digest, Pictorial California, California Arts and Architecture, Harper’s Bazaar, Sunset, and Los Angeles Times. In 1964, Elizabeth Gordon left House Beautiful, yet Parker continued to shoot. The number of assignments waned and, in the late 1960s, he casually retired from the business. He died at his Echo Park home in 1976.

Although photography has changed dramatically since Parker’s heyday, many of his images have the same resonance as the best design images of today,” says architectural photographer Matthew Millman. “His compositions are dynamic and his lighting style is striking. He really captured the emerging modern design movement of California and the West.”

His legacy is some 60,000 images that tell us — through the creations of talented architects and interior designers — where we were, how we lived, what our communities looked like, and what we valued. The designs spoke for themselves. Maynard L. Parker gave them stylish amplification.