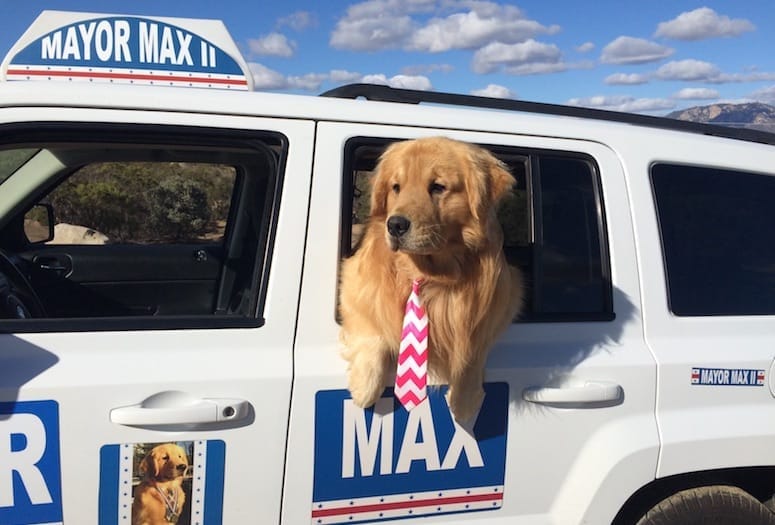 Mayor Max received his title in 2012 when Idyllwild residents voted in a fundraiser for the town's animal rescue non-profit.
PHOTOGRAPHS COURTESY PHYLLIS MUELLER

The heartwarming silliness of having Max as mayor began in 2012, when residents of this unincorporated mountain village above Palm Springs (est. pop. 3,500 year round) voted in a sponsored “mayoral election.” It was a fundraiser for the non-profit Idyllwild Animal Rescue Friends (ARF). Thirteen other dogs and cats were on the ticket with “Maximus Mighty Dog Mueller.”

“I’d never heard of ARF,” says Max’s owner, Phyllis Mueller. “I’d just moved to town. I saw it as an opportunity to be the voice behind the mayor and to do something important.” 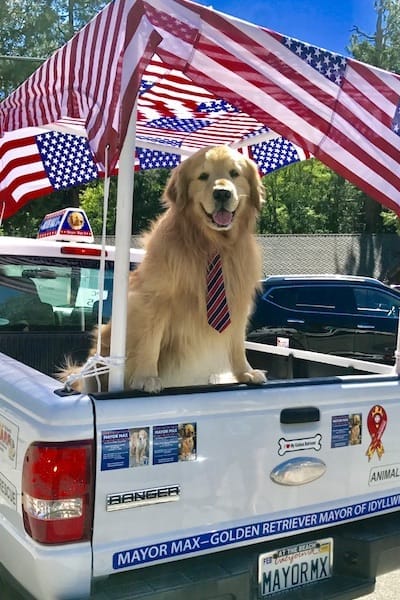 Mueller had moved to “the Hill,” as the mile-high village is known, from Temecula and Orange County, where she had a marketing firm servicing Fortune 500 companies. At age 70 now, she continues the business and focuses more on dot.com start-ups. Though she puts in a lot of hours as “chief of staff” at the “mayor’s office” — her home — she doesn’t tell her clients that her dog is the mayor, she says.

However, since Idyllwild’s scenic backdrop of crisp clean air, music, art, hiking and rock climbing draw visitors from all over the globe, it hasn’t been hard to build a following through appearances in town and social media. For example, one family from Dubai arrived in Idyllwild already eager to see Max, Mueller says.

The current Mayor Max is the second of Mueller’s dogs to fulfill the role. The first “elected” Mayor Max passed away from cancer in 2013. Mueller searched his bloodline and brought home three golden retrievers; one became Mayor Max II at just 11 months old. The others, Mitzi and Mikey, are his deputies. Idyllwild residents dubbed the new Max “mayor for life.” 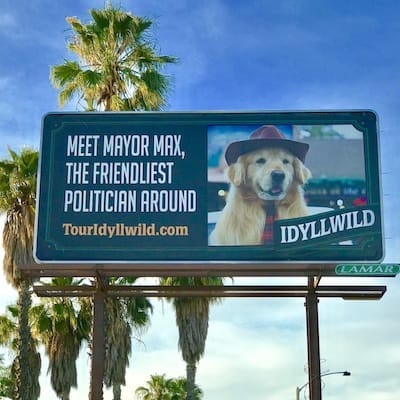 Mayor Max's reach extends well beyond the borders of Idyllwild thanks to a marketing push by the owners, Phyllis Mueller and her husband, Glenn Warren.

Max will lead this year’s parade, traveling in a white truck with a red-white-and-blue canopy. The deputies will be behind him in a white Durango. The parade usually includes horses, a mountain rescue team, fire engines, and the Forest Service. The Idyllwild Brew Pub & Ferro Restaurant will be represented with an Authentic 1850s Concord Stagecoach pulled by two horses.

On July 4th, Max will resume his daily downtown appearances under a shade tree outside Wooley’s gift store. His deputies will join him whenever there’s enough shade.

Mueller and her husband, Glenn Warren, fund the entire “mayoral” outreach through their marketing company, Mueller says. Each year, they spend about $30,000 on printing Mayor Max calendars, for example. One year, they spent $10,000 on Max’s birthday party, which drew 1,000 residents. 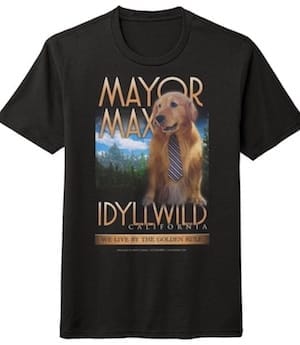 Now, there’s a clothing line that international followers can order online at mayormax.com. One stunning T-shirt shows Max in reflective mode with the forest behind him, sporting one of his 100 colorful ties. The bottom of the portrait reads: “We live by the Golden Rule.”

Mueller hopes her dog can help increase world peace, which is not difficult if everyone treats each other with kindness and refrains from anger, she says. Her celebrity dog has a book underway, Mayor Max: If I Were President, which outlines his peace strategies.

• READ NEXT: How is Greater Palm Springs and Surrounding Cities Marking the 4th of July? See Our Complete Listing.