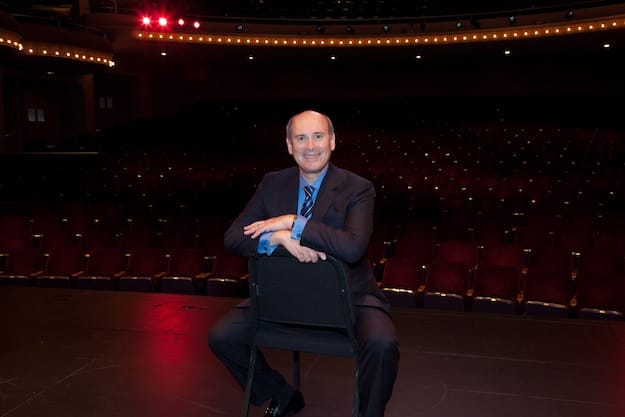 After serving as director of presentations and theatre operations since joining McCallum Theatre in 2000, Mitch Gershenfeld was appointed CEO and president in June, succeeding Ted Giatas, who retired after 13 years.

Despite the promotion, Gershenfeld has kept his hands-on approach to booking acts for the Palm Desert performing arts center. That means he deals with the artists’ special requests from the technical side, like lightning and sound, to the food they eat or the color of the dressing room.

Gershenfeld has held similar positions around the country, but he chose to plant roots at McCallum because of its reputation and ability to weather the economic upheavals that have left comparable venues in financial straits.

“I know that when the economic crisis hit in 2009-10, a lot of my colleagues were facing 30 percent to 50 percent decrease in sales,” Gershenfeld said. “In this market, I can’t say we weren’t affected by the crisis, but not as much. Our sales at our worst point were down only three percent.”

In an interview with Palm Springs Life, Gershenfeld spoke about his new position, and some of its quirks and nuances.

How have the relationships changed with various artists?
“When I started in this business, there was a lot of loyalty between talent buyers and the agents they were working with. If an artist came to town for a specific promoter, that artist would continue to come back to town for that specific promoter. That has changed over the years partially because of the casinos and the kind of money that they throw at the acts. So the level of loyalty that used to be in the business isn’t there anymore. There still are artists who will be loyal to us. But in many cases these days, it just comes down to dollars and cents.”

What sort of backstage requests have you had from artists?
“The famous story in rock history is that Van Halen asked for 5,000 M&Ms with the brown ones removed. The singer Jewel wanted tea with honey, which is not unusual, but the honey had to be in one of those plastic bear containers. They want to make sure the promoter is paying attention to what they ask for. Sometimes they will slip something in the contract language. John Tesh used to put in the middle of all this legal boilerplate that the promoter will provide him with a World Wrestling Federation action figure. It was there to see if anyone was reading it. So, of course, I read it. I crossed it out and in red ink I wrote, ‘While we will not provide a World Wrestling action figure, we will upon request provide a Teletubby’."

Do you have a favorite?
"One of my favorite acts that has performed here is Steve Lawrence and Edyie Gorme. Their contract rider calls for their dinner. They had to have a separate dinner from everyone else. They wanted a chicken. A roasted chicken. Except it had to be big enough that they could eat dinner, and then there would be enough meat leftover for six sandwiches to take home with them at the end of the night. The first time, our caters here said that has to be a really big chicken. Can we get two chickens? I said let me call. I called the road manager and he said, ‘No, no, no, you have to find a chicken.’ So I told my caterers, go out and find the biggest chicken in Palm Desert. They found the chicken."

The Baby Boomer generation is retiring in large numbers. They grew up with music that they continue to patronize. How do you find a balance between what they want and what other segments of the population want?
“I get emails all of the time: Why can’t you bring in Eric Clapton? Why can’t you bring in Fleetwood Mac? The answer is purely economical. These artists get enormous fees and we can’t do that here. If an artist is getting $500,000 a night, I have 1100 seats, you can do the math and figure out how that works. So there is the economics of how much the act costs and there is the economics of how much you can generate in sales in 1100 seats. And the economics of how many people are really going to pay money to see that artist. We did Wilco here, for example, which was a fantastic concert and I’m glad we did it.

Wilco played Los Angeles and I think sold out their venue. We didn’t sell out, so the fact that a group like Wilco came here and attracted the sort of age of audience that I would love to bring more of that in here, but the fact that I couldn’t find 1100 or even 1000 of that age group to come and see a Wilco concert, that shows that while there may be a lot of interest in bringing in younger acts, is the audience really going to participate?"

What impact have the casinos had in booking acts?
"They have been very aggressive with the performing artists they bring in. If you look at the casinos, many of their acts are ones that used to play at the McCallum Theatre. The reason they play at the casino now is because they get a lot more money than I can afford to pay. The smallest of the three local casinos has twice the amount of seats we have, and the others have more. The economics of that shows it’s very difficult for us to compete. What we have managed to do is find artists that there is an audience for. Broadway has become a big part of what we do because there is an audience for it. It’s not just old folks. Young people like Broadway thanks to TV shows like Glee and Smash. By doing that, we can attract a wider audience. We did Rock of Ages and that has music from the 1980s. Some of my older customers were frankly not happy with the show. My position is it’s a show currently on Broadway, it’s a popular Broadway show and brought in an audience that goes beyond the scope of an older demographic.

When we brought in (chef) Anthony Bourdain, I would say the majority of the audience was in their 20s. And he was like a rock star. He came out and they were on their feet screaming. It was wonderful to see that group of people here. We try to attract as broad-based a group of people as we can. The fact that a lot of our programming may skew older may be a function of just what performing art centers do.

Unfortunately, the audience for classical music, ballet and opera is an older demographic. I wish it weren’t. But the fact that we are not teaching arts in schools anymore means we have generations of people who didn’t grow up with it. I’m afraid these kinds of things are going to die out completely once these older generations are gone. If people in their 30s and 40s have no context for symphony orchestra, ballet and opera, you just don’t wake up when you’re 60 and say, “Oh, I got to go see the symphony’. It’s a function of ‘Oh, when I was a kid, I used to hear symphony music or I played the violin in the symphony orchestra’. Without that context, I don’t know what’s going to happen to that art form in terms of live performances. That’s really how the programming works. There is no attempt or effort at the McCallum to do things just for people 65 and older. There is a place you have to be at financially and demographically to make sure this theatre can fill its seats."

What goals have you set for McCallum?
"We’re going through a strategic planning exercise to see just what we’re doing 5 to 10 years from now. One of the things we want to do is make sure our education program is strong. For more than 10 years, we have been doing our aesthetic education program. It brings teachers here during the summer and they are trained on how to integrate the arts into the general curriculum of the elementary school classroom. And we send teaching artists out into the schools, and we get actual class time. We are teaching creative problem solving, creative thinking. Teaching kids that there isn’t necessarily one answer to a problem. I see the McCallum partnering with the schools in a big way to help them understand this new paradigm of learning."