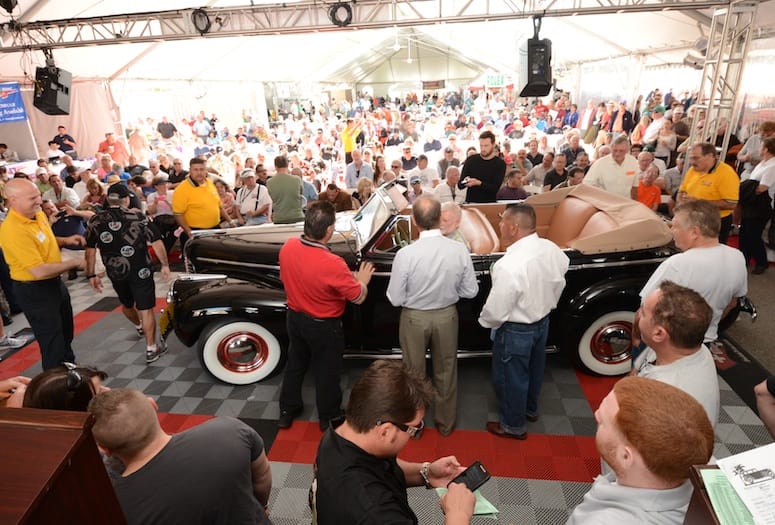 Under a blanket of rain, Keith McCormick, a former car dealership owner from England, stood beside the late actor, Telly Savalas, at the Newport Collector Car Auction in Newport Beach, Calif.

While admiring the cars and bidding action, McCormick struck up a conversation with Savalas.

“I had a thought that this type of event would work in Palm Springs. Savalas encouraged me and now 28 years later, I’m living the American Dream,” Keith recalls.

McCormick’s Palm Springs Collector Car Auctions, which will showcase more than 500 cars Nov. 22-24 at the Spa Resort Casino parking lot, has grown to include:

According to McCormick, “We take in more money at this auction than The Palm Springs International Film Festival, Tour de Palm Springs, American Heat Motorcycle Rally, and the Date Festival all put together.”

Not bad for a gentleman whose initial marketing strategy included as he puts it, “lifting wiper blades and placing flyers under them with my wife to keep within a meager publicity budget.”

Back in 1981, McCormick, a successful businessman in the United Kingdom, relocated his wife, Desley, and young family to Palm Springs where they became owners of the Tramway Union Gas Station.

Active in the Chamber of Commerce, McCormick was part of a team seeking initiatives to promote tourism downtown. After a rainy day adventure and a nod from an unlikely celebrity encounter, he drew upon his knowledge and love of cars, and hosted his very first exotic car auction event in 1985.

McCormick’s Classic Car Auction, it’s oft referred to by name, has become a favored local event with two large auctions each year. The party atmosphere, livened with bidding action, gives registered bidders and sellers complimentary MUMM’s champagne during a special Happy Hour and an event caterer sells an assortment of tasty items to keep guests from getting hungry. Open to the public, it attracts more than 20,000 car enthusiasts to the desert.

“Only 7 percent of our attendees are bidders,” McCormick says. “About 93 percent are ‘tire kickers’, and that’s just fine because they’ll become future bidders.” This year, guests will be treated to a variety of automobiles, such as:

McCormick’s son, Jason, and his wife, Julie, help round out this family owned and operated business.

“We share the responsibilities,” Keith says. “Jason runs the day-to-day, freeing me up for politicking.”

Always thinking of ways to attract tourists, Keith adds, “I’m happy to snarl up the city as long as visitors are spending money downtown.”

Jason has also been instrumental in utilizing the power of television and technology to enhance the auctions.

“We are taking our auction from being seen by 20,000-plus people that attend the event to the possibility of millions of people being able to experience the excitement of the auction from the comfort of their own homes,” Jason says. “We will have multiple camera angles and full commentary about the cars as they cross the block.”

Adds Keith, “That means that anyone in the world can participate in live bidding with an MC and cameras that can take you under the hood if you have a question.”