This 1967 Ford Mustang GT S-Code is among the gems that go up for sale at McCormick's Classic Car Auctions.
PHOTOGRAPHS BY NATE ABBOTT

Keith McCormick is preparing for his next vintage car auction. A semi-annual tradition in Palm Springs, occurring every February and November and dating back to the mid-1980s, McCormick’s Classic Car Auctions sell an almost comically odd assortment of vehicles from his showroom on North Indian Canyon Drive: a powder blue 1980s Cadillac, a faded black 1940s Lincoln, a cherry red 1970s Mercedes convertible, a creamy 1970s Rolls-Royce convertible, a bright yellow 1960s Austin Healey, a 1950s Studebaker. Yet, as diverse as they are, all of these cars have one thing in common: They’re priced in the hottest segment of the collector car market.

“We’re probably known best for being a shop that sells cars that cost $100,000 and below,” McCormick says. It’s a fortunate position for a vintage car dealer at this moment. Though the top end of the market has gone a bit soft — auctions at the annual blue-chip Monterey Car Week were down $100 million dollars last year — sales are robust in the “entry level” portion of the market. “So we’ve been unaffected by that downturn,” McCormick says. 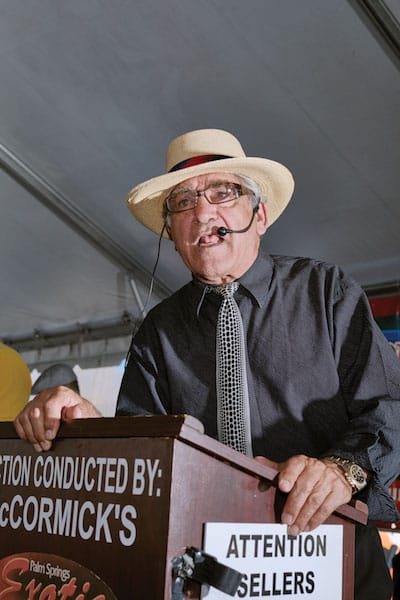 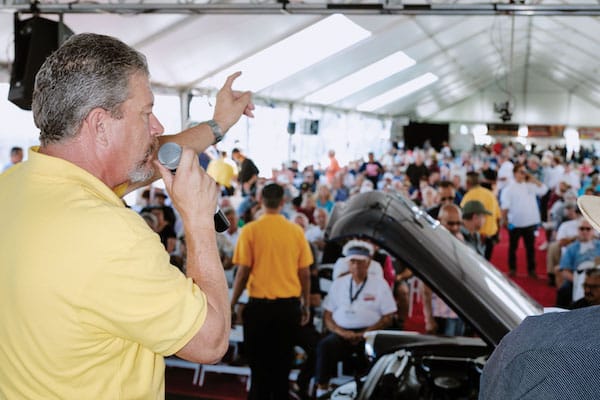 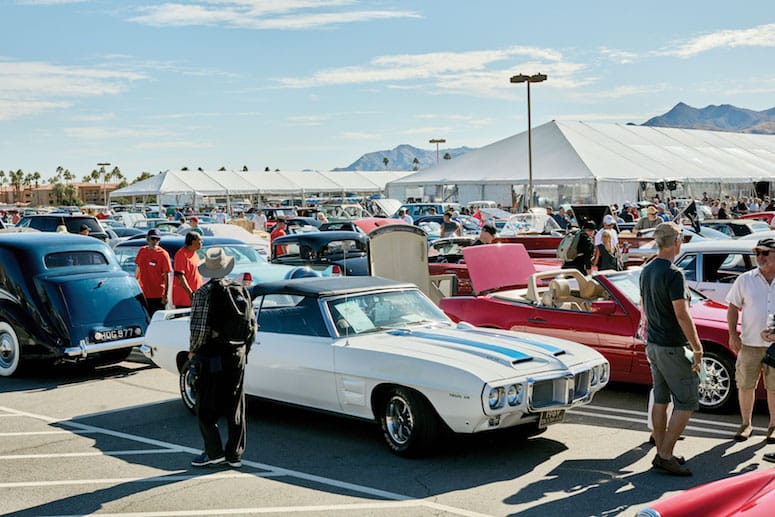 Many of the cars are local from the Coachella Valley, mainly from elderly owners who have either lost the capacity to drive, or from their estates. “Local is about 15 percent of our business,” says McCormick, who makes a point of familiarizing himself with the community of older people with cool old cars. “Because, yes, they end up using us in the end to get rid of their cars,” he says. “Once they get to the stage where they’re not fit to be driving, they turn around and consign or sell their cars our auction.”

The eclectic nature of the vehicles that pass through McCormick's auctions can readily be connected to the collector car culture in Palm Springs and its environs. Part of this lies in a notable fondness for and the outré vehicles from the 1970s and ’80s — think: chrome trim, wire wheels, and neo-classical — that flows from some of the town’s flamboyant characters. But like so many things here, the origin of many of these cars traces back to the local boom era in the second half of the 20th century.

“It all gets hooked in with modernism — the midcentury modern houses here,” McCormick says. “People who come here and want a second home here will also buy a 1957 T-Bird or a 1963 Studebaker Avanti to park outside. It kind of goes hand-in-glove with that. When you look at our town, and you drive around our town, you can see that we’re almost a bit of a time warp.”

Many cars that are being resold to new homeowners arrived in town with their original owners. As they aged, they use their cars less frequently and sometimes place them into storage for years. McCormick's has a passion for discovering, repairing, and preparing these vehicles for sale.

“Palm Springs is full of cars that have been in garages for 20, 30, 40 years,” he says. “Someone just dug out a [John F.] Kennedy car. J.F.K. to come to Palm Springs, and he had a car that he used to borrow. He used to drive it around with his family. We’ve got that in one of our upcoming sales. We get all these unique cars that get dug out of garages that we never knew existed.” 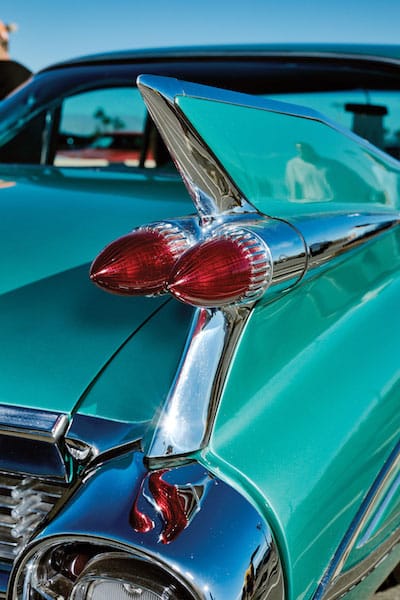 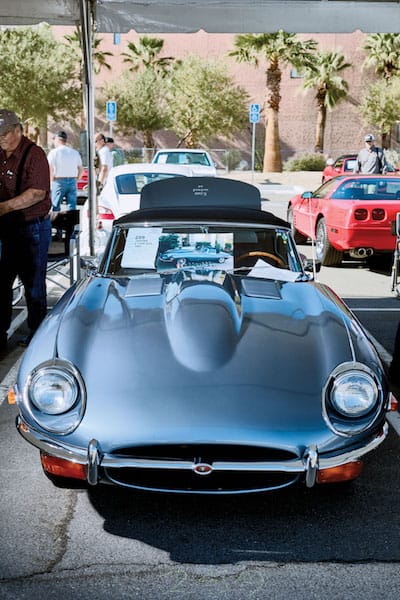 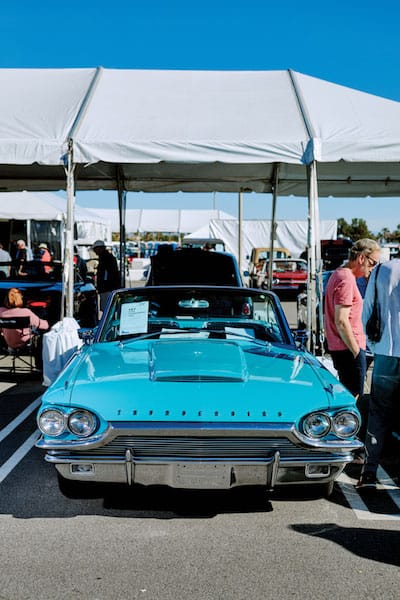 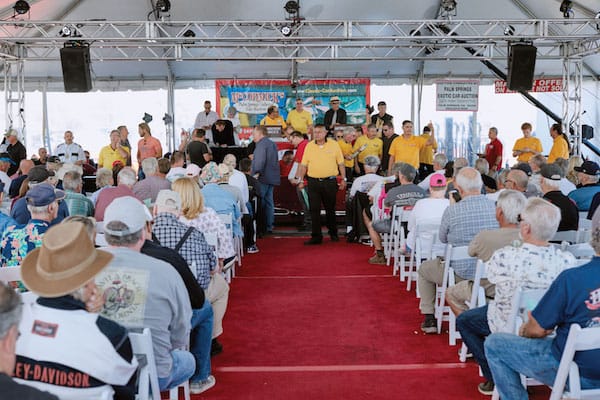 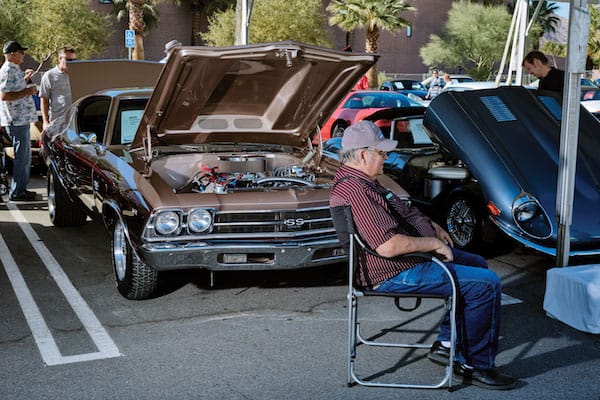 Given Palm Springs’ proximity to Hollywood, and its history as an outpost for the entertainment industries, McCormick has, in almost 40 years of selling cars in town, had a number of celebrity vehicles roll through his lot. He sold O.J. Simpson’s Ferrari, and then later his white Bronco. He sold some Cadillacs owned by Elvis Presley, a Rolls-Royce that had been Frank Sinatra’s, and a limousine that was owned by Howard Hughes that had a working toilet in the back. “We even sold Liberace a 1932 Cord,” McCormick says. “When he bought the car from us back in the day, he said, ‘I earn my living by playing the chords, so I had to own a Cord.’ And he used to drive it on stage in Las Vegas at the start of every show, and he’d get out and make that same statement.”

• READ NEXT: Car Shows Like McCormick's in the Desert to Check Out.

Buyers of vintage cars tend to purchase the vehicles they imprinted on when they were kids, the dream cars of their generation. This may seem like a challenge for McCormick's whose lot is heavy on cars from the 1950s, ’60s, and ’70s. But the retro vibe of Palm Springs means that the local market is somewhat future-proofed. “Now we’re getting the influx of the younger generation, who are buying these classic cars,” McCormick says. “They’re the ones who are now getting the bug of, ‘If we can afford it, we’re working in the film industry in Hollywood, and we can buy a second home here, let’s get a cool car that goes along with it.’” 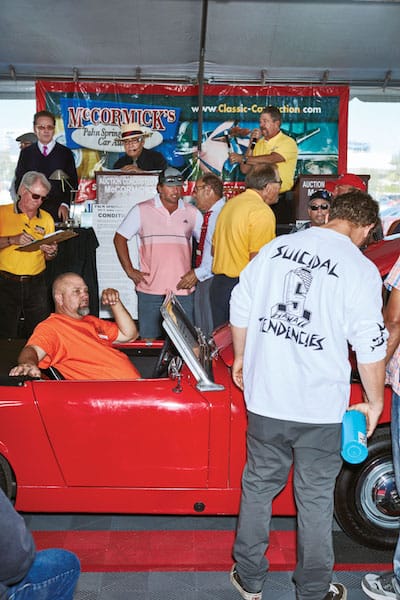