“Dihedral synchro-helix actuation.” That’s the technical term for the door-swing action of new McLarens, including the sexy 570S Spider. “Dihedral,” or even “butterfly,” would suffice for mixed company, but if you own a McLaren (or strive to), “dihedral synchro-helix actuation” will help answer a question you’ll get on the daily. Just don’t call them “Lamborghini doors” — (A) because they don’t work the same way as that company’s famous up-and-forward “scissor” doors, and (B) because the 570S Spider is not a Lamborghini.

The confusion is understandable — automobile door design isn’t taught in school — and few people know the difference between dihedral, butterfly wing, gull-wing, falcon wing, and scissor doors, let alone “dihedral synchro-helix actuation” doors, and all their various machinations. Nor, for that matter, are many familiar with McLaren and its bona fides as Great Britain’s preeminent race car builder, ever since New Zealand–born Bruce McLaren assembled his eponymous racing team in the early 1960s. Aside from a run of 100 F1 supercars in the mid-’90s and a brief partnership with Mercedes-Benz a decade later, he stayed out of the road-car business until 2011.

But roar up to any restaurant, country club, or shopping center in a 570S Spider, and slack-jawed bystanders won’t have to know Bruce McLaren from Bruce Almighty to understand what it’s all about. When those dramatic doors swing out and up and forward in one smooth, dihedral, synchro-helix action, it announces your arrival as only a 204-mph, mid-engine supercar can. 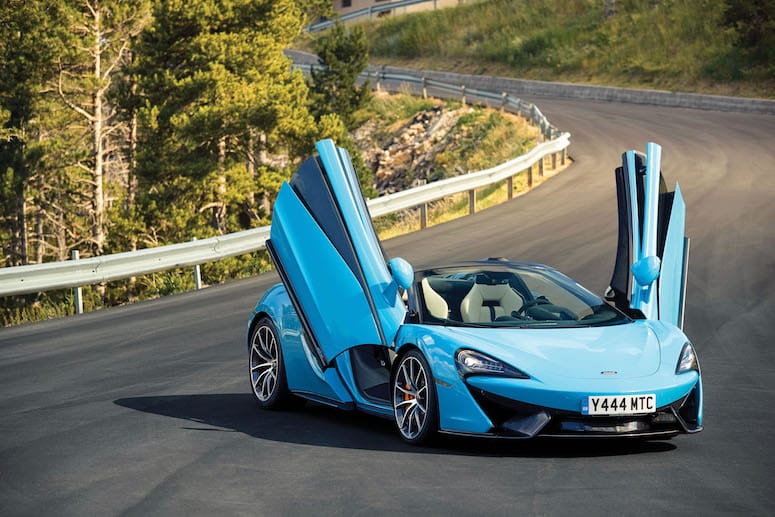 The dihedral doors allow for easy entry and exit while guiding air into the side intakes to feed the radiators.

Only the 570S Spider isn’t a “supercar”; it’s merely a sports car, says McLaren, which reserves the former term for its swoopier, 212-mph McLaren 720S. All things are relative, I guess, because while the $211,300-plus 570S Spider (or convertible, in McLaren-speak), its slightly less expensive fixed-roof stablemate, and the glass-top 570GT — collectively known as the “Sport Series” — are technically McLaren’s entry-level offerings, there’s little about them that invites immediate comparisons to what we normally consider “sports cars,” like Porsche 911s, Jaguar F-Types, and Chevrolet Corvettes.

Indeed, the 570s have far more in common with the $288,845-plus “Super Series” 720S: All are mid-engine cars with 105.1-inch wheelbases, twin-turbocharged V8s situated mere inches behind the passengers, similar lightweight carbon fiber “tubs” as their structural basis, seven-speed dual-clutch automatic transmissions, and highly focused, less-is-more interior aesthetics. These cars derive their names from the metric horsepower (PS) rating of their respective 8s, rendering the 720S 150 ponies stronger than the 570S. That said, the 570S is no less of a supercar just because the 720S is super-er. Did I mention they both have dihedral synchro-helix actuation doors? Ferraris don’t even have those.

One late-afternoon cruise up South Indian Canyon Drive was all the confirmation I needed that, what with the spinning heads and craning necks of pedestrians, cyclists, and fellow drivers, the 570S is something special. Its wedge profile and extremely low, wide stance are typical supercar stuff, yet it brandishes many unusual and unique-to-the-Sport-Series design details, including the head- and taillights, blackout rear end, sculpted engine cover, and various scoops and ducts and flaps designed to keep the engine aspirated, the intercoolers radiated, the brakes cooled, and the tires glued to the ground even above 200 clicks. 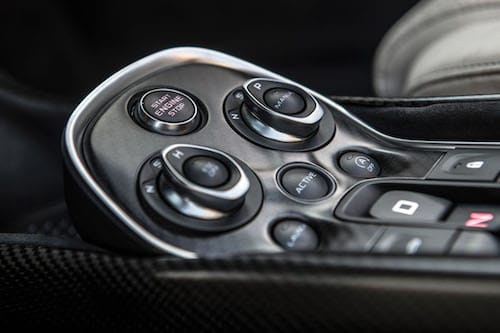 The interior features hand-stitched leather and a “floating” central console designed for ease of use and minimum distraction.

The Spider features structural fairings behind the passengers’ heads that give it a Targa-like look and effectively manage wind turbulence. The roof is a two-piece power-retractable hardtop that raises quickly and quietly and at speeds up to 25 mph, thus mitigating the dread of putting the top down just before a stoplight turns green. 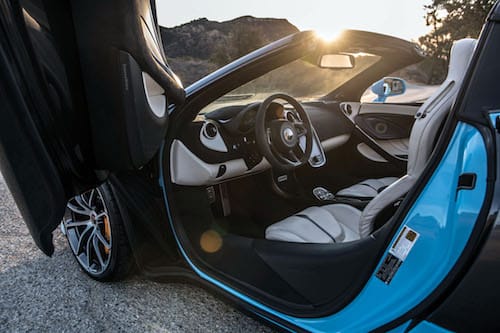 The headlamps and the long air intakes on the doors are both stylistic interpretations of the head of New Zealand’s national bird, the kiwi, paying homage to Bruce McLaren’s own race cars, on which a kiwi was almost always represented in some form while he was alive. We suspect he was smiling from heaven when the designers sketched out these details.

Without exception, everyone needs a few seconds to locate the concealed (though intuitively located) electro-pneumatic door release and swing up those sexy doors, thus granting access to the 570S’ intense and rather austere cabin. Sure, it can be gussied up with stitched leather, micro-suede, outstanding Bowers & Wilkins speakers, and seats clearly designed by folks familiar with the actual sport, but owners will never mistake this for their spouse’s Bentley. 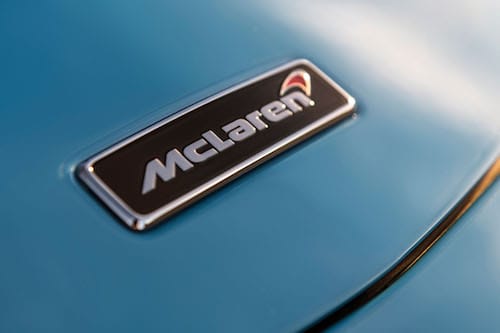 Indeed, the interior of the 570S is more of a command center than a chamber of spoils, though McLaren allegedly took pains to lower the “tub” sills to facilitate ingress/egress — especially for a driver who happens to be wearing a pencil skirt. That said, installing oneself in the snug, thinly padded racing-style seats underscores the importance of a low-carb diet and will have you cursing “leg day” at the gym. 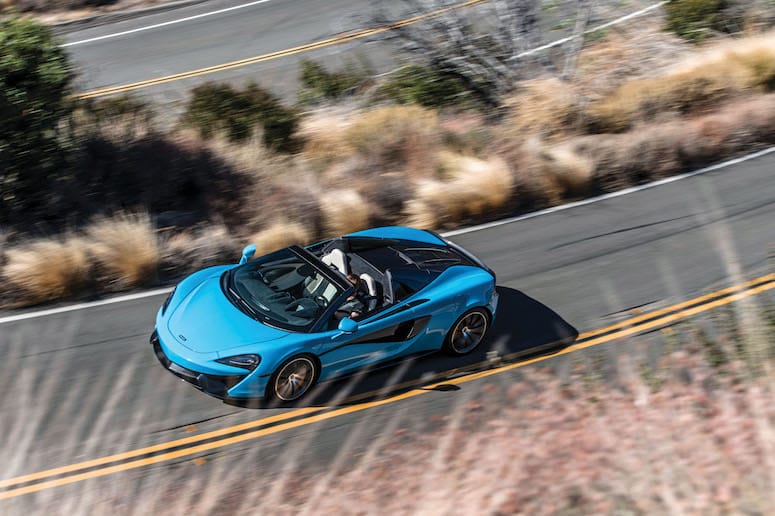 The steering wheel ticles the fingers, turns are executed with razor-sharp deliberateness, and the brakes yank you down from speed with stupendous force.

The fully electronic instrument cluster is all business, changing configuration in concert with the driving mode. Press the engine start button on the lower console, grasp that small-diameter steering wheel, and it all makes sense. The engine rips to life and idles with a sharp staccato endemic to race-bred, small V8s such as this. Forward motion commences once you press the “D” button on the console or tug the right steering wheel paddle. In Normal mode, all controls are calm and linear, but twist the adjustable powertrain and suspension mode selectors to Sport or Track, and prepare for a driving experience with an almost overwhelming amount of feedback. Power is explosive. Shifts become shockingly quick. All the while, the steering wheel tickles the fingers, turns are executed with razor-sharp deliberateness, and the brakes yank you down from speed with stupendous force.

The 570S is an extremely lightweight car despite its folding roof trickery, and the immediacy with which it changes both direction and velocity in Track mode seems to defy physics. And yet, in Normal mode, the 570S is eminently drivable in traffic, which is more than many supercars — or even sports cars — can claim. Never did I feel that I was in over my head in this car, even on a balls-out run up and down Highway 74 with regular visits into triple-digit territory. My greatest concern during my time with the 570S Spider? Not chewing up the low-chin spoiler, so if I were ordering one of my own, the first option I would select would be the power front-end lift system.

To that end, McLaren expects that many 570S buyers will indeed drive them every day. And now that I’ve fairly mastered those doors, I know I would, if only to be able to tell the world what dihedral synchro-helix actuation means. As for McLaren calling it a sports car when everyone else thinks it’s a supercar? I’d probably just leave that alone.

McLaren Rancho Mirage provided the car for this story.