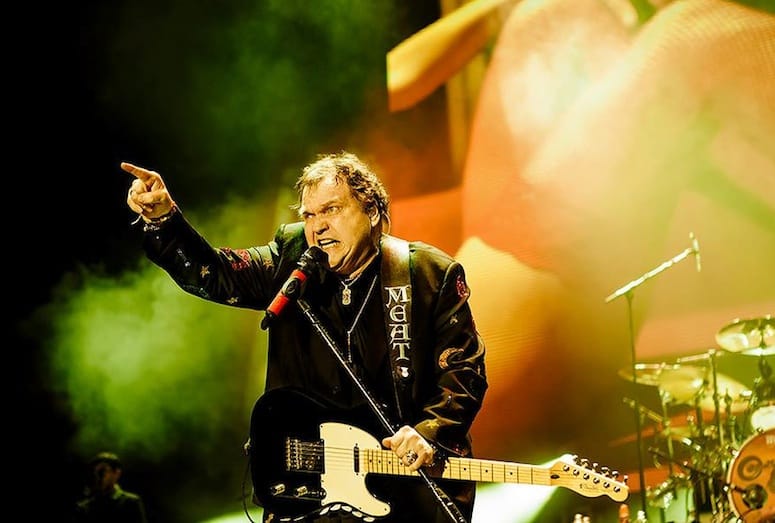 Meat Loaf, the outspoken singer best known for his massively best-selling 1977 album Bat Out of Hell and its equally monstrous 1993 sequel, Bat Out of Hell II: Back Into Hell, has faced some degree of personal hell of his own.

However, he’s not letting any of it throw him off his game.

“I can sing most of the songs in the set in the original keys, but I just don’t sound like I did when I was 27,” he laughs. “I’ve had three sinus surgeries and three surgeries on my vocal chords. I had a hemorrhaged vocal chord that I did an entire Australian tour with, and I was spitting blood every night. I was giving them everything I got, but it was tough.”

Meat Loaf, now 68, will tackle many of his greatest hits on Oct. 23 at the Pechanga Resort & Casino in Temecula. Meat Loaf: “My brain lives in the creative world.”

Not long before he hit the road to commence his fall tour, Meat (born Marvin Lee Aday) discussed with PalmSpringsLife.com his unstoppable drive to perform, whom he’d most like to duet with on Paradise by the Dashboard Light, and what classic film he wants to remake and star in.

What songs can fans expect to see in your show by the time you get to the Pechanga Theater?
“Well, we always do Paradise [by the Dashboard Light], Bat [Out of Hell], and Two Out of Three [Ain’t Bad] [all from 1977’s Bat Out of Hell]. I love doing them. From [2010’s] Hang Cool Teddy Bear, we do Los Angeloser. And (sings melody), If It Ain’t Broke, Break It [from 2006’s Bat Out of Hell III: The Monster Is Loose].

“There’s a song called Runnin’ for the Red Light (I Gotta Life) [from 1995’s Welcome to the Neighbourhood] that we open with. And I love Lemon [Life Is a Lemon (and I Want My Money Back)] from Bat II. We combine those two and put them together.

“This is just to get the band back together and get everybody going again. We haven’t played together in two years. That’s because I had major back surgery — four outpatient back surgeries. It hurt to sing. I was in the hospital for 17 days. I still need another back surgery, but we’re going to wait. I have a Tommie Copper back brace.” (chuckles)

Wow. It sounds like you love performing, no matter what. Nothing is going to keep you from being onstage.
“No. Somebody asked, ‘Are you going to cancel this tour?’ Not a snowball’s chance in hell!” Meat Loaf:  “People want to make it be all about you, but I just flip it around and make it about the other person.”

Why do you think you have such drive to keep performing? What fuels you?
“I have to work all the time, I have to be creative. My brain lives in the creative world. It really doesn’t exist on the plane that everybody else exists on. It doesn’t. I try to be as down to earth as possible. But I think of myself as a plumber. I’m telling you the truth! If I go to the grocery store and people recognize me, I’m shocked that they do — that they know who I am.”

How come?
“I don’t think of myself in that light. I don’t feel on that ego plane. If you go to an event of some kind, people are going to ask for autographs, so you prepare yourself and you’re nice, and you’re ready to sign them. People want to make it be all about you, but I just flip it around and make it about the other person.”

That’s cool. It’s kind of like what you’ve said before, that the songs you sing aren’t about you — they’re more about the listener’s experience.
“That’s right, that’s right. I never asked Jimmy [Jim Steinman, who wrote the lyrics for the Bat Out of Hell album and many of the songs Meat sings] why he wrote a song or what it’s about. And I will never tell. If you ask me what this song is about, I’d say, ‘I’m not telling ya.’ I want you to make the decision — what it’s about. It’s your song now, not mine.” Meat Loaf, who appeared in The Rocky Horror Picture Show and Fight Club, is a big Orson Welles fan.

If you could choose anyone to duet with you on Paradise by the Dashboard Light, who would it be?
“I like Miley Cyrus, actually. (chuckles) As soon as we hang up the phone, I’ll have to call my manager and find out if she wants to do a duet with me. All she can do is say no!”

I could see her doing Paradise with you. That sure would be something.
“Well, yeah, it’s a different kind of song. It’s a nasty song — pretty nasty. But I do happen to like her. She sings well. We’re here in the year 2015, and people are freaking out because she’s doing this and that. You know, I believe in God and religion and all that, and I believe there’s an afterlife. Somehow, I don’t think what she does crosses the line. And she can really sing, too. But she’s not quite as good as that girl on The Voice — Christina Aguilera.”

Who else is on the shortlist of people you’d like to sing with?
“Well, I would have loved to have sung with Whitney [Houston]. I saw Whitney live before she broke, in a really small venue. All her relatives were there, and I sat down and talked with her for probably a half hour. I hadn’t seen anything like it since I saw Aretha in the ’70s.

“I would say Whitney, Christina, and Aretha [Franklin] are probably the three best female singers, but Aretha is the best. I’ll give you an example. Aretha did a cover of Spanish Harlem. Listen to her. She’ll sing the song exactly as it’s written so that you get the song and digest it — and then she’ll take off. That’s where Aretha was really smart. She would set the song up as a real song, and then she’d let you have it. (laughs) That’s why I think Aretha is smarter than some of them.”

Finally, since you’re going to be performing in the Palm Springs area, do you have any stories that you can recall about spending time there?
“I’ve been going there since the ’60s — going up to that waterfall, that pond. Played some Pro-Am golf tournaments there too. But nothing outrageous. I didn’t have a group of girls rip my clothes off, or anything.” (both laugh)

Well, there’s always a chance, right?
“I hope not!”