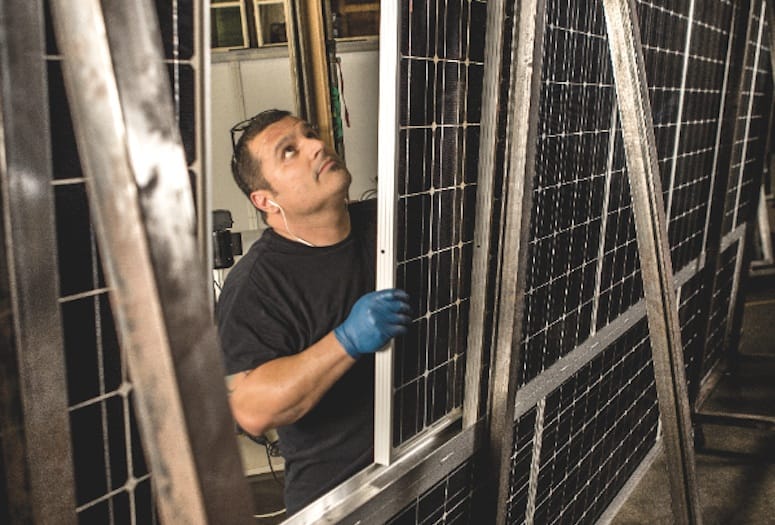 Eric Kuykendall assembles a solar array for Sactec Solar, which relocated from Torrance to launch at the Palm Springs iHub.
PHOTOS BY ETHAN KAMINSKY

Off-the-grid mobile solar power. Energy-saving smart water meters. Solar hot water collectors. They sound like the enterprises of cities known for sprouting renewable energy companies, but these and a growing number of others are creating high-skill jobs in Greater Palm Springs. Some of these entrepreneurs came to realize their ideas at the Palm Springs iHub, an incubator and Accelerator Campus operated by the Coachella Valley Economic Partnership to attract innovators to the region.

“The idea for the iHub, or innovation hub, is to diversify the economy and create year-round, high-paying jobs for educated and highly skilled people who want to live here,” says Joe Wallace, who manages the iHub in addition to his role as CVEP’s chief executive officer. “Since we opened the iHub in 2012, we’ve attracted 44 companies in the fields of renewable energy, health and medicine, high tech, advanced manufacturing, and digital arts and media.”

The companies at the iHub represent various stages of development; eight have joined since January.

Companies selected for the program work in a collaborative environment at the main iHub office, where they receive coaching in finance, marketing, and other areas critical to attracting investment and bringing their innovations to the marketplace.
Once they prove their concept and show a solid business plan, they “graduate” to the Accelerator Campus to develop prototypes and begin light manufacturing.

They all have a few things in common: They chose to launch their businesses in Greater Palm Springs. They solve contemporary problems with technology. And their goals are to go global, create wealth, and contribute to the economic well-being of this region.

Power to the People wherever they are

With the click of a button, two small cranes begin unpacking 12 Sactec Solar arrays from a modest size shipping container. Each array, a 19-by-8-foot frame that holds 10 solar panels, weighs roughly 600 pounds and generates 25,000 watts in one day, enough to sustain the average single-family home for an entire month.

Remarkably, the system is completely mobile: Operators can pack and relocate the units as quickly as parts deploy. Building on their initial design of a single trailered array, Sactec can erect a mini solar farm in just 24 hours.

“You can go set up a rock ‘n’ roll band out in the middle of the desert,” Wallace says. “You can ship [the panels] off to Africa where they don’t have electricity and run a hospital, or a school, or a dental clinic.” 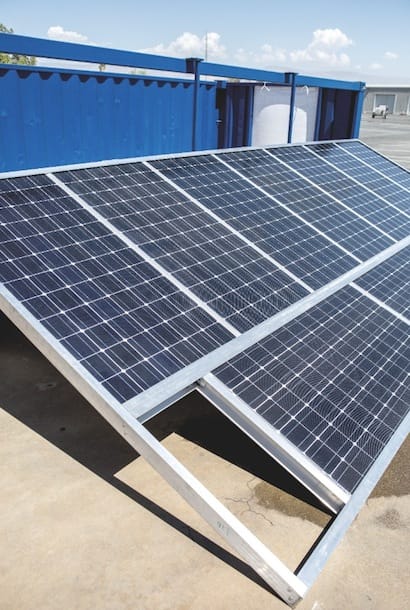 Based in the Palm Springs Accelerator Campus, Sactec Solar produces mobile solar arrays, some with sun-tracking technology, for use in remote and otherwise powerless locations.

Bob Kunesh, Sactec’s president and CEO, plans to work with the Federal Emergency Management Agency, and the agricultural and defense industries, supplying transportable power in remote, off-grid, and potentially life-critical locations. Some of his installations use sun-tracking technology to maximize solar panel power.

Kunesh expanded Sactec to the iHub’s Palm Springs Accelerator Campus from Torrance. Shortly after, he won the 2013 Emerging Entrepreneur award from the Inland Empire Center for Entrepreneurship and opportunities to expand his business arose. He gives much of the credit to the iHub, noting Sactec’s evolution couldn’t have happened anywhere else.

“We never see this kind of attention when we’re in the L.A. area or other places,” Kunesh says, referring to the space and business coaching he receives. In other regions, the small, innovative individual is lost to the big $500 million enterprise. In Greater Palm Springs, “There is a degree of opportunity and connection I’ve never seen.”

Waste Not, Water Not

In addition to the sweeping San Jacinto Mountain views, the beauty of Palm Springs lies in the ease of business networking, says Hank McCarrick, whose company, SecoSys, joined the Palm Springs iHub in the summer of 2014, after applying also to business incubators in Riverside and San Diego. Two years later, McCarrick moved his base of operations from its birthplace in Valley Center to the Palm Springs Accelerator Campus. The benefits of relocation were unrivaled. “Aside from providing us free infrastructure to operate, a lot of introductions were made to connect us to business opportunities,” McCarrick says.

McCarrick designed a device that saves water by alerting users to problems and enabling them to simply shut off the valve if it detects a leak, a pipe bursts, or other troubles arise. The system monitors water flow, sends immediate trouble alerts, and silently solves problems even if the user fails to see or react to the automatic notification. Wallace suggests that every business and home should have a smart meter. “About half the people on my street are here half a year and [then] they’re gone,” he says. “Their houses sit here, and if they spring a leak and it runs for days, you can do $100,000 in damage.”

It’s a design Palm Springs Mayor Robert Moon says he could have used when he moved to the city 15 years ago. His water bill exceeded $100 per month.

“We thought that was normal,” says Moon, who chaired the commission that committed $1 million over three years to build the 43,000-square-foot Accelerator Campus near Palm Springs International Airport. Neighbors told him they were paying only $20.

“We had some people come in and they found a leak underground by our pool. [A smart meter] would be a tremendous tool for people  to control their water usage.”

McCarrick, who tested the meters in local pilot projects and realized a water-use savings of more than 40 percent, envisions a much larger smart grid that will manage all things water-related from Palm Springs to Indio. 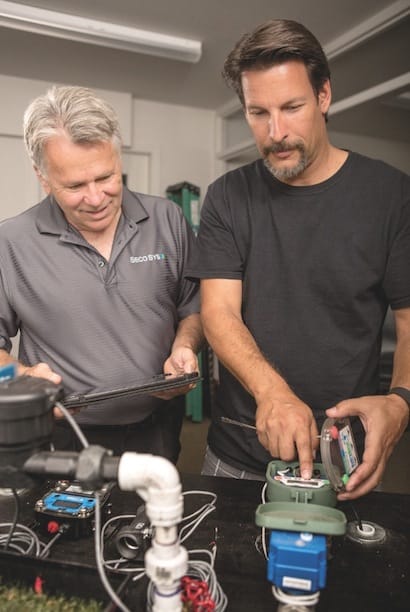 “American Leak Detection [based in Palm Springs] is offering our product to its customers,” McCarrick says. “Mission Springs Water District is putting our technology into a 55-home project in Desert Hot Springs. Vintage Associates [a landscape maintenance company] is installing our product for homeowners associations. And Coachella Valley Water District is offering a rebate for our platform.” 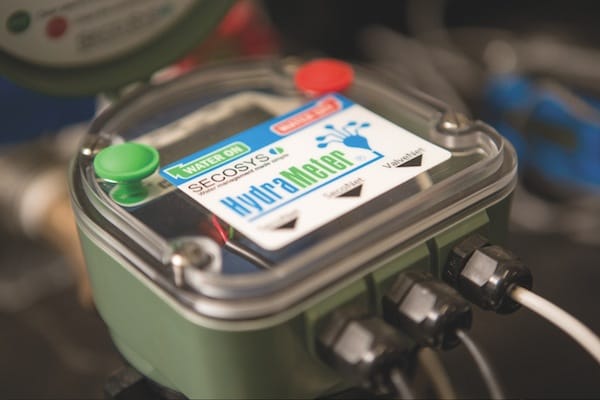 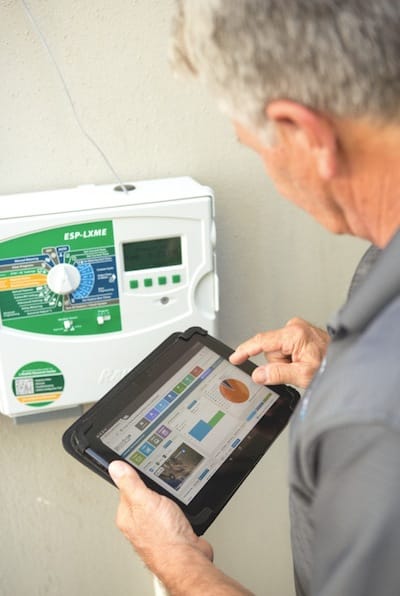 SecoSys developed smart meter technology that alerts users to leaks, bursts, and other troubles, and solves problems when users fail to respond. 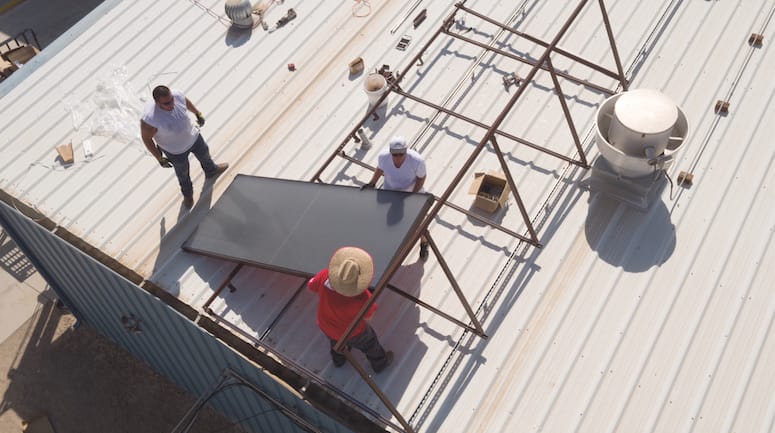 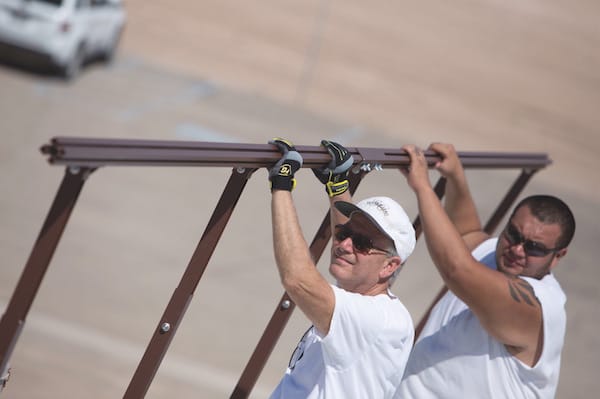 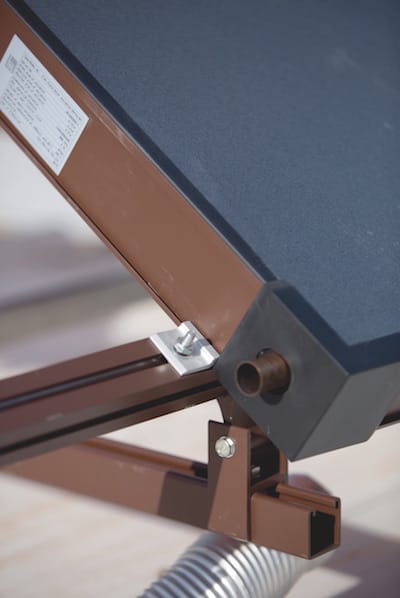 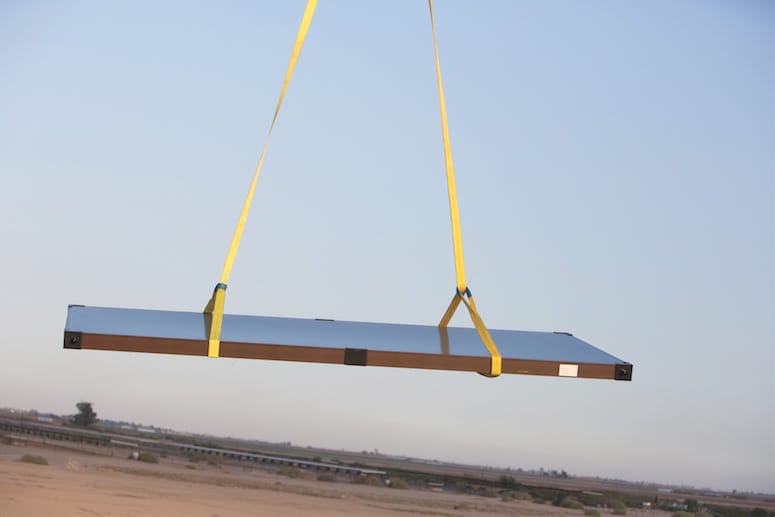 Made in the USA

The precious access that helped McCarrick’s SecoSys was especially attractive to Chinese entrepreneur Jeff Cheng, who relocated his firm, SolAqua, to the Accelerator Campus in April. SolAqua developed a system that uses sunlight to heat and circulate water through buildings in lieu of a gas-generated system.

“Everybody knows that China is a world of manufacturing,” Cheng says. “Unfortunately, they use lower-quality [materials] in their products. We want to create a real American [high-quality] brand.” And there’s no better place to produce solar energy than the California desert, where the sun shines almost every day.

The Accelerator Campus is situated in a foreign trade zone where international shipments are processed duty-free, a significant benefit for a firm that plans to import a large-scale robotics manufacturing system.
“It’s not easy [doing business in a foreign country],” Cheng acknowledges. But he’s built a local team to assist in managing production in the U.S. market. 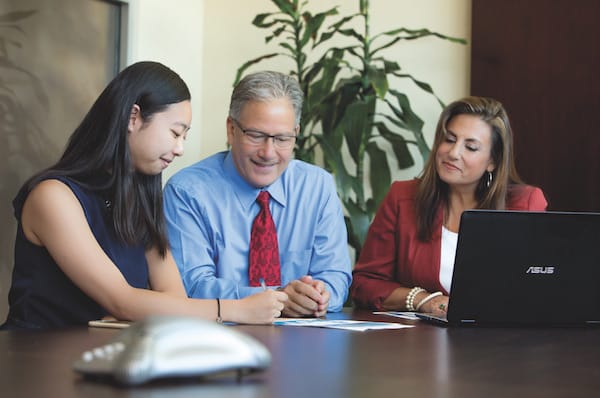 Working on the theory that necessity is the mother of invention, the Palm Springs-based Agua Caliente Band of Cahuilla Indians, an economic powerhouse in its own right, has launched an information technology firm that employs more than 40 people charged with creating the digital capacities and interfaces necessary for an increasingly online marketplace.

“There’s an inventiveness that happens when you get a bunch of people with that [IT] background together,” Wallace says. “They’ll solve problems you didn’t even know existed.”
Wallace suggests the Fusion team is hastening the region’s “cluster of knowledge.” If the Silicon Valley boom is any indication, he says, “It’s a pretty rapid, intense atmosphere. And that group is critical to putting a stake in the ground [for] an IT cluster here.”

As companies expand and move to Greater Palm Springs, CVEP tills their field in partnership with the region’s three public school districts and local colleges and universities. They’re tailoring curricula to business needs, introducing students to careers, providing access to scholarships and financial aid, and developing internships. The career pipeline is designed for the needs of local business.

“I see more and more companies coming in,” Moon says. “In Palm Springs, we’re very focused on water and solar energy, and we see businesses [in the iHub] that are really moving ahead. Success breeds success, and we’re going to do everything we can to help it.”