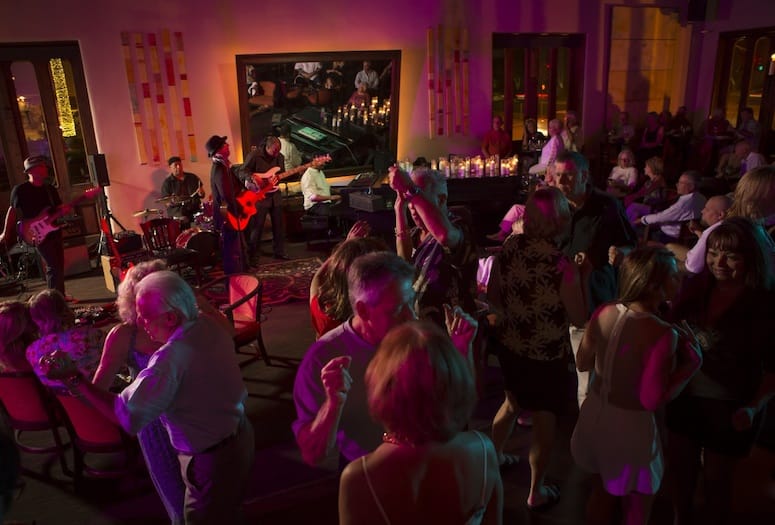 Flickering lights set a sultry mood around the stage at Vicky’s of Santa Fe in Indian Wells.
PHOTO COURTESY OF VICKI'S OF SANTA FE

When Barbara Sinatra fancied a night out at the supper club, she’d arrive in an Oscar de la Renta gown and drink “booze, of course” — a margarita or martini, she says, whichever roused the mood. And, of course, she knew everyone in the room.

“It was very elegant,” she recalls in a soft, raspy voice. In the 1950s and ’60s, the crooners were mellow. The ambiance lively. Patrons dressed to the nines. “It was a wonderful life.”
I didn’t wear a gown when I visited my first supper club. I went with a sundress. I didn’t know anyone in the room, but I gladly undertook the booze requirement. As the jazz band lit up the night, I imagined my heels might be tapping to the same beat young Barbara’s did, so many moons ago.

The supper club scene in Palm Springs emerged with the influx of Hollywood starlets and well-to-dos slinking away from the big city. They were a thing of glamour and riotous late-night indulgence born out of speakeasies and cabarets, where habitués dined and imbibed at candlelit tables tightly packed around an intimate stage.

The fashion fizzled with the onset of ’80s punk rock and DJ-spun dive bars. Call it rebellion, if you will — the kids wanted contrast, a genre of their own. But life is cyclical. Valley entertainment is re-evolving, and Sinatra-esque supper clubs are having another moment. This time around, though, it’s a new breed of dinner show.

As I step through the grand 16-foot cedar doors at Vicky’s of Santa Fe (which, logically, is in Indian Wells), I’m hit with a rush of chatter and the sound of bottles clinking behind the entryway bar. General Manager Marc Lodovico whisks my beau and me to our table, a high-top by the stage; there’s hardly an empty seat in the house. I’m close enough to rest my drink on the 68-year-old Baldwin piano’s wraparound bar, glimmering red under the warm glow of sunset seeping through the windowpane.

Local jazzman John Stanley King takes the mic as my wasabi-drizzled ahi tuna tower arrives. A man in a white fedora swirls a frosted dirty martini in the front row.
King grew up playing Dixieland tunes in his grandfather’s band. 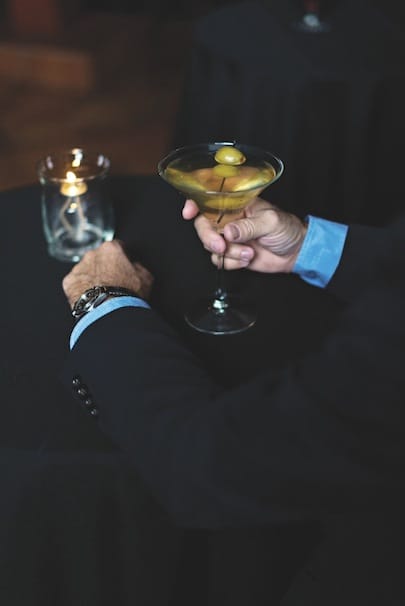 Now music director at Vicky’s, the 57-year-old valley native revels in blending the classics with funkier beats fit to woo a younger audience. “Palm Springs is all about that cool daddio vibe,” he says. “[But old-school entertainment] has to be delivered in a way that younger generations can understand.”

It’s all about making something old seem new again. “My presentation, or my look, or the words that I use might inspire the younger generation to hang out for a little bit. Like, wow … this guy’s kind of a trip.”

He is a trip, with a rhythmic beatnik drawl and shaggy hair. He and the band don crisp three-piece suits. As King says, “We look real Tony Bennett, you know what I mean?”

I dig it. And I see why Sinatra dug the scene. King engages the crowd, spouting stoner jokes and dropping a few expletives despite his mother’s attendance tonight. She’s shaking her head, palm to forehead with a rosy grin plastered across her face.

King’s contemporary jams might fly under the radar unless you know what you’re listening for. “Sometimes I sit up there and rap a little bit with the standup bassist doing his thing and the drummer doing his thing,” King explains. “If you’re young, you’ll go: Wait a minute! That dude’s rapping ‘Rapper’s Delight’ on top of ‘I’ve Got You Under My Skin.’ ” 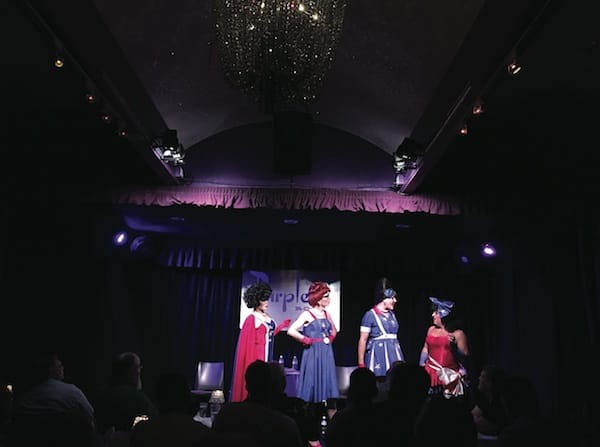 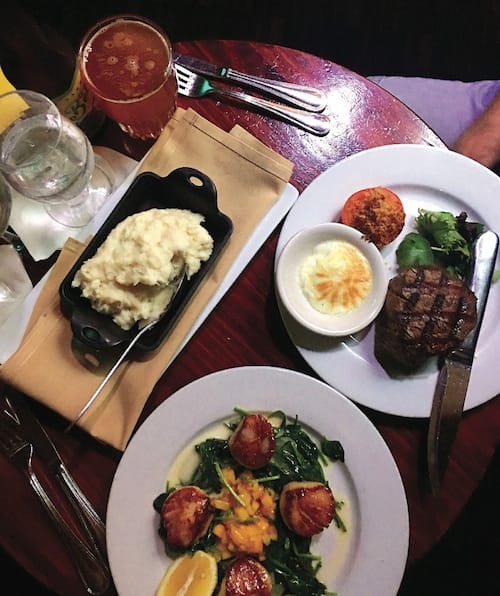 Left: No one wants a taste of cheese doodles offered by Rachel Kinsey (right) at the Purple Room. Right: Preprandial jumbo scallops and prime filet at Vicky’s of Santa Fe.

I pile as much ahi as I can onto a sesame-specked cracker. The crowd’s into King’s rendition of “Moondance” by Van Morrison. And then he busts into some surprisingly soulful spoken word: Dr. Seuss’ Green Eggs and Ham.

Vicky’s opened in 1989 as a piano bar across the street from the Indian Wells Resort Hotel, which was founded by Lucille Ball and Desi Arnaz. Still family-owned, its founder Vicky (whose real name is Vanessi) passed the torch to her nephew Marc Laliberte, who’s been running the restaurant for 11 years.
Vicky’s offers nightly entertainment, including its Jazz Supper Club Series, a philanthropic effort promoting music education in schools with dates in December, February, and March .

“We’re going into the eighth season [of the series],” Lodovico says. “The supper club’s a good way to be a little nostalgic and marry food trends with [bygone] music.”

Tonight, the sounds are served up with pan-seared scallops and a plump gorgonzola-buttered prime filet, raising the culinary bar on Vicky’s original five-entrée menu. When sumptuous eats meet quality entertainment, it draws a crowd.

Laughing With My Mouth Full

“Everything in our culture has changed a lot since the ’60s and ’70s,” explains local entertainment producer Dick Taylor, who sources talent for the Purple Room in Palm Springs. “We’ve gone through an awful lot in our world and people are more accepting of language that is off-center; and parody is far more accepted now than it would have been back then.”

I arrive at the supper club that first raised its curtains in 1960 wearing an orange frock that clashes with the aubergine walls. I fit right in; I’m in for an evening of jaw-dropping, bright-sequined drag.

My handsome, suspendered waiter Javier takes my order: an arugula salad with candied pecans and a spiced purple pear; mahi mahi, with a crisp mustard crust, and crab and cherry tomato relish. 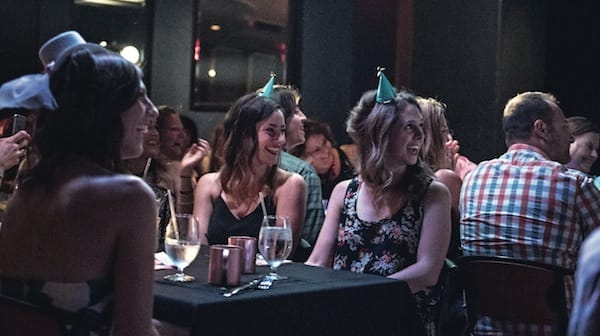 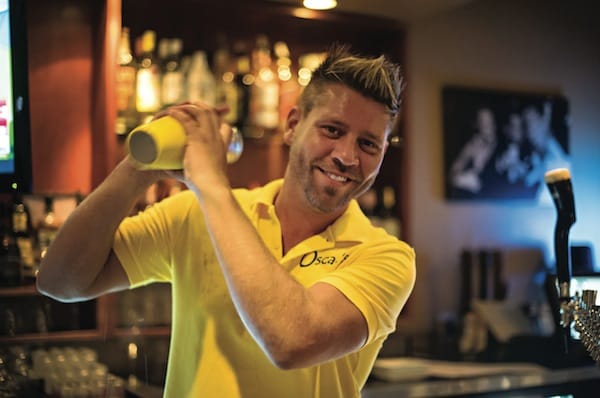 Javier presents the dessert menu before I finish, delicately ensuring he doesn’t intend to rush my meal. But the performance is about to start, and, he says, “It can be hard to hear once the show gets going, so if you’d like to order ahead, I’ll pace it out.” I skim the list. Chocolate truffle bomb? Done.

The comically hairy Rachel Kinsey is on stage pulling cheese doodles from a pouch under her skirt and I’m laughing so hard tears are welling. I can barely keep it together to savor the heap of dark chocolate and raspberry coulis placed before me. An embarrassed audience member vehemently declines a handful of doodles for dessert.

When Taylor first found the Purple Room, now owned by Michael Holmes, he says it took him back in time.

“I had a flashback,” recalls the producer, who cut his teeth at the famed Los Angeles Cocoanut Grove supper club in the early ’70s. “It’s a small version of the Cocoanut Grove — truly a supper club. A place you make a reservation, sit down, have a cocktail or two, dinner, dessert, cup of coffee, and then the show comes on. I just fell in love with it.”

Every night isn’t drag. There are big-name Broadway headliners, too. But Michael Holmes’ Purple Room has made its mark as the premier place to behold seriously outlandish drag.

As the show comes to a close, the entire audience is sweeping their arms to and fro through the air. Even my guy’s doing the wave, darting an unabashed smile my way. Little does he know, I’m recording the entire moment on Snapchat. 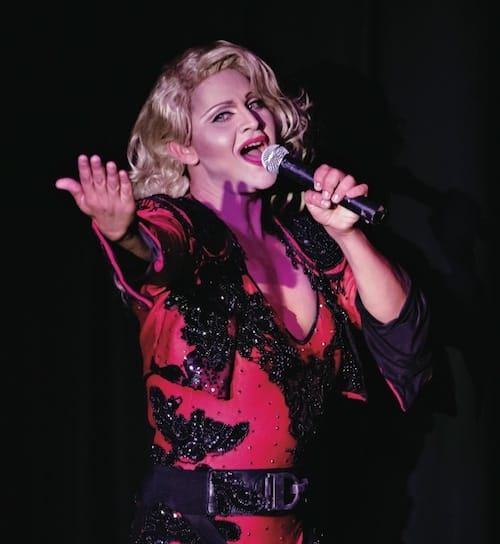 PHOTOS BY NEIL HUSVAR
The producer of Carnival Cabaret built out Oscar’s stage in 2015 after a successful first performance had him signing papers to bring the show from Tahoe to Palm Springs. Among the talent this night: fake Madonna (left) and fake Judy Garland. 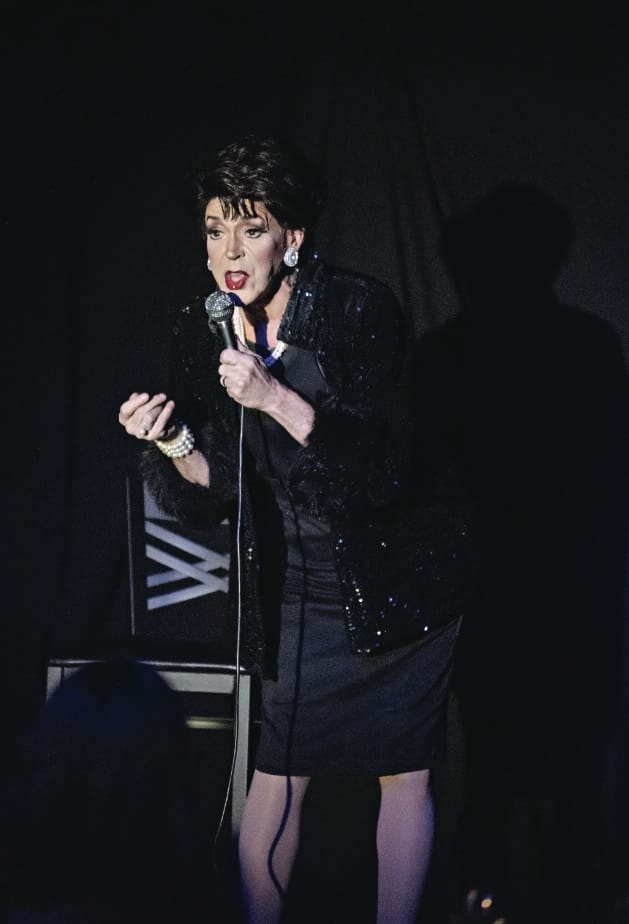 The Youthful Wisdom of the Old

On my way into Oscar’s Cafe & Bar, I practically step on Sinatra’s star on the Palm Springs Walk of Stars. It’s one of the valley’s newest supper clubs, with a formal stage that was built out in December. They offer blues nights and comedy, but the club is known for its weekend Carnival Cabaret, a drag production hosted by 84-year-old James “Gypsy” Haake, who holds the title for oldest female impersonator in Guinness World Records.

Sinatra’s portrait hangs in the club’s entry, but Carnival Cabaret producer Dan Gore agrees with Taylor. “I don’t think he would like it,” Gore says. I beg to differ. Sinatra pushed the limits. He was mouthy and flamboyant and anything but conservative. I’m not saying he’d be up there coiling a plush feathered boa around his bodice, but I have to imagine he’d get a kick out of these irreverent queens.

I step aside as the host tries to find me a table because it’s a full house and my name’s fallen off Oscar’s reservation list. A little miffed, I’m staring at the floor when two rather cold, silky hands grab each of mine. I lock eyes with my potential suitor: a lanky, gray-haired gentleman in a suave button-down shirt that swallows his slender frame. He spins me around the foyer, sweeping me off my feet.

“Who are you?” I beg to know. He ignores me with another twirl. My date, snickering by the club’s cigarette dispenser, has no plans to intercept. “It doesn’t matter,” the stranger says, peering deep into my baby blues. “You. Are. Beautiful.”
Guy’s. Got. Game.

“They call me Gypsy,” Señor Suave finally concedes. As quickly as he arrived, the star floats away to dress for the show.

Behind the scenes, Gypsy and his theatrical conspirators put their faces on inside the dressing room formerly occupied by The Fabulous Palm Springs Follies. The chef is out tonight and the cuisine is underwhelming, but that leaves ample opportunity for Gypsy’s entourage to steal the show — impersonators lip-syncing Dolly Parton, Whitney Houston, Judy Garland, and Madonna.

Gypsy glides onstage in a glittering strapless gown that reflects tiny shards of light through the room like a disco ball. Her beaded Cleopatra headpiece dances with every step and sashay. “I want one of those!” I exclaim to my partner. Maybe it’s the booze, but the bachelorette party up front is fawning over it too. Gypsy’s got a trunkful of brilliant accessories, and she models something new after every song.

The show is unquestionably contemporary, but its genetic line to the mid-20th century is clear. The alcohol has kicked in, and I’m not watching a Dolly stand-in; I’m watching the Smoky Mountain Songbird herself, stomping across the stage.

I get it, the supper club draw. They’re intimate. They’re provocative. They’re everything you want in an evening out without ever having to leave your seat.