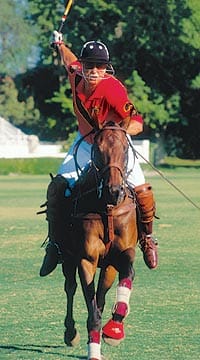 Often nameless and largely faceless to clubhouse spectators, they are the unsung warriors in a sport with ancient battleground roots — the juice in an obscure equestrian dance of chase-and-contact, bump-and-run.

When Alex Hagen III grabs leather and canters to the lineup on the polo field, he is bent on a single achievement: stellar performance. The Empire Polo Club owner and real estate developer does not strategize his next negotiation — or think about his wife Betty back in Beverly Hills or when his Empire Air pilot will fly him home. What dominates his power broker mind this moment is making the plays when it counts.

“What else should we think about?” asks the quintessential family guy whose club in Indio is part of the largest polo  center in the United States.

Legendary San Francisco sports writer Paul Lippman poignantly describes the sport as hockey on horseback. Certainly the tooth-retention rate is much higher in polo, but if you have borne witness to a polo match, you know what he means. Man and animal fly a perilous 35 miles per hour, hooking and bumping opponents along the way. Passing shots find targets 150 yards out and more. But they live for the slap shots on goal, connecting muscle and mallet, man and animal in a perfect scoring storm.

Who are these guys? A strange breed, perhaps, but they are little known. Sports Illustrated profiles nary a polo player. Not much ink is bled over world titles or the sport’s bid for a return to the Olympic Games. It’s glam slammed for its pastime appeal to the famously bored and women in Mamie Eisenhower hats. What of the gladiators and their mighty steeds that fuel this spectacle?

Thirty-six-year-old Mike Kerley, a career polo pro in two countries, makes some of polo’s top stock at Fish Creek Farms in Indio. His chestnut gelding Hootie was named Best Playing Pony at Eldorado Polo Club’s Skins Game. His patron of nine years, Fred Mannix, so adored the horse that he had him FedEx’d to Palm Beach to play in the U.S. Open.

Trainers like Kerley employ a sort of pseudo-alchemy to transform a racetrack reject into a polo powerhouse. In an obvious labor of love for these guys, they create a bonding relationship that strengthens over years.

“It’s like molding a lump of clay and turning it into something better,” Kerley says. He learned to make a few slap shots of his own in Santa Barbara, from his father. And, like any athlete worth the salt he sweats, Kerley takes the losses in stride and treasures the wins. The intensity wanes when he climbs off his horse, greeted by his wife Kerry and his future equestrians Ryan, 1, and Hope, 4. Decompressing between matches, he philosophizes that his career is one that’s “too fun to get out of.” His commitment has yielded a roomful of trophies and a dizzying whirlwind of memories, but the prize for his Rolex 12-goal victory in 1993 tops his mind. He can wear it.

Christian Moon trains and competes year-round at his barn at Deer Creek Farms in Thermal, riding the horses he trains. Running Moon Properties is the Briton   thirtysomething’s 9 to 5, but he has been around polo since youth. He learned from one of the best: former mentor and Brit Claire Tomlinson, the world’s highest-ranked female in recorded polo history. Horse whispering isn’t bollocks, he says. “It takes patience and time and a horse with natural ability and a quiet temperament. Kindness.” Then there’s the payoff. Finely tuned and handy horses can fetch handsome rewards in the tens of thousands of dollars. Moon says it can take years. “When it all works out, it’s the ultimate to be able to walk quietly and carry the big stick.”

Moon joined New Yorker Michael Rothbard in the eight-goal league this season on the Broadway-Shoot-the-Moon team. Rothbard, 41, locks the doors on his real estate development biz on Fridays and jets west to compete. His girlfriend, show jumper Jasmine Batis, makes the commute all the more tolerable. With two years and a few titles under his belt, he’s shooting for high goal. “Practice, practice,   practice” is the mantra on his lips.

High-goal hired guns, Argentines Miguel Gutierrez and Mariano Fassetta, both 28, are consummate career professionals playing at the top of their games. Gutierrez turned pro at 20, becoming the third generation in a Buenos Aires polo family legacy to pick up the stick. He’s bumped Prince Charles off the line and hooked sheiks from the United Arab Emirates. He lives to play and plays to live. Win or lose the paycheck remains the same. “But it doesn’t last forever,” he says. “You keep trying, reaching to be the best. When you get older, it gets harder.”

Fassetta came to the United States in 1998. With a skill level that puts him in the top 15 percent in the world, his successes have earned both reputation and respect.

Raised on his father’s polo ranch in Buenos Aires, there was little doubt about his career path, even after he earned a business degree. Globetrotting from match to match “is a very fun life,” Fassetta says. “You start playing, and then you’re making a living at it. I’m having some of my best years.”

Fassetta wants a family in his future and looks forward to the years when he will lead what he calls a normal life back on the polo ranch.

Sadly, when the battles are over, like most soldiers these days, this band of gladiators will ride off to an anonymous existence. Then again, they’re not after the fame. It’s the game.