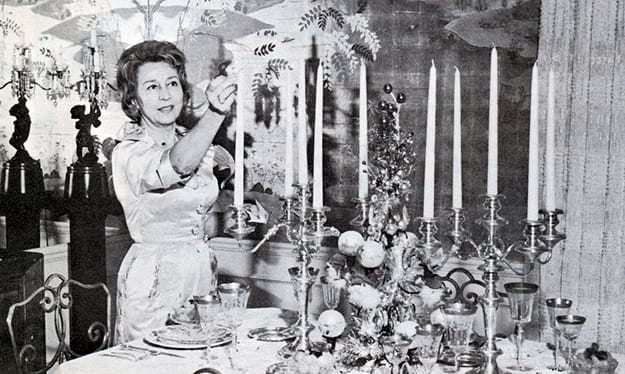 Reprinted from the December 14, 1960 issue of Palm Springs Life Magazine

Stuffed roast turkey, plum pudding, fruit cake — these are the traditional food for Christmas dinner and whose delightful odors emanate from every kitchen about this time of year.

Now is when Mom begins going through her old recipe files and her cookbooks to find the family favorites. Now is when she begins planning that all-important menu for Christmas Day. Now is when she bakes those rich fruitcakes—the ones that are so much better if they’re soaked in rum or brandy for a few weeks before being eaten.

Among the people who make up the fascinating world of Palm Springs, there are numerous justly – famed cooks. From a representative few of these, Palm Springs Life has collected a group of recipes for your Christmas eating pleasure.

Let’s start with a cocktail that’s as typical of our desert as cactus and ocotillo, with a touch of Mexico, our near good neighbor. It’s the specialty of the house at "Desertland Gardens," the charming old Spanish hacienda of Mr. and Mrs. Chester C. ("Cactus Slim") Moorten.

Basically a cactus juice cocktail, they call it a "Moorteni," and "Cactus Slim" says that you’ll chin yourself on the rafters after three of them. He and Mrs. Moorten serve them from a barrel cactus that has been plumbed and fitted with a spigot — talk about your atmosphere! And the cheery red hue of the cactus cocktail seems to go perfectly with the gaiety of the season. (Incidentally, the only place I know of that carries the prickly pear syrup here is Sam Stuart’s El Paseo Market.)

Around the holidays when Mr. and Mrs. Walter Braunschweiger entertain with their delightful brunches, guests are likely to be served an unusual concoction called a Christmas Coffee Cocktail.

It hasn’t a drop of coffee in it, but its rich tan color gives it this designation.

Mr. Braunschweiger says the secret of this drink is in the mixing. And he gives fair warning: no more than one to a customer.

But drink mixing is not Mr. Braunschweiger’s only claim to fame. He is equally adept at outdoor cooking, and an invitation to the Braunschwei gers is a promissory note for good eating. Charcoal fires are his particular forte, and when this couple entertains, the word is, "Let them eat steak."

To prepare his fire, Mr. Braunschweiger lets the charcoal briquettes die down to hot coals. Then he sprinkles over them hickory ends that have been well soaked in water. In this red-hot heat and hickory smoke, he chars his fillets or the sirloins for the tidbits in the recipe offered here.

Another couple well-known for entertaining on the desert are Dr. and Mrs. John Costello. When they give their annual "Champagne y Frijoles" party each spring, they always serve a delicious guacamole dip. It invariably goes fast, and there’s hardly a party when a second batch doesn’t have to be whipped up.

Gwen Costello likes the dip equally well as a salad dressing. For Christmas dinner, she suggests serving this pale green sauce over molded tomato aspic or slices of bright red tomatoes for a colorful salad course.

Mr. and Mrs. William Malouf are perhaps best known for entertaining large gatherings of their friends, but they also give occasional small dinner parties at their home, and guests at these are fortunate indeed. For then there’s no caterer, and the special dishes are quite likely to have been prepared by the Maloufs themselves — or at least from their favorite recipes.

Vicki Malouf’s recipe for stuffed artichokes can be a meal in itself when served with a tossed green salad and a dessert. We suggest it for our Christmas dinner menu because of its tastiness and its festive quality.

The turkey stuffing recipe on our menu is a Christmas favorite at the home of Mr. and Mrs. J. Ross Clark II, active members of the country club set. With two little boys in the family, hearty meals are a requirement. The children appreciate even the most exotic foods and they dote on their mother’s oyster stuffing for fowl.

June Clark says she is especially fond of this stuffing because it is mild, not too spicy. And it goes equally well with all domesticated fowl or game birds.

At Christmas time, a few fortunate friends of Mr. and Mrs. Charles Farrell receive very special gifts of well-brandied fruitcake, rich in Brazil nuts, almonds and other goodies. The recipe is an old Swedish one and is the favorite of both Virginia Farrell and her sister, Vivian Peterson.

Vicki and Cynthia, the two young daughters of Mr. and Mrs. Kenneth Kirk, are cookie eaters from way back. (What child isn’t?) So Helen Kirk is especially happy that she has treasured her icebox cookie recipe for years and years. In fact, it was her mother’s recipe originally and has always been well-liked in the family.

For Christmas, the cookies can be dressed up with multi-colored sugar sprinkles. For the rest of the year, they may be baked plain.

Yes, these candy cane cookies are a lot of trouble to shape, but the effort is well-rewarded in the delight of friends when they discover them on the Christmas table.

So these are the Yuletide recipes offered by Palm Springs Life for your dining pleasure. Save the recipes, try them, and bon appetit!

Sift three-forths cup flour remaining with cinnamon, cloves and allspice. Sprinkle over the fruits and nuts, and mix into batter, folding in evenly.

Place the fruitcake mixture into loaf pans lined with heavy waxed paper and bake in a moderate oven, 350 degrees, for one and one-half hours. If cakes seem to be drying out, set open pans of water on bottom shelf of oven while baking.

When done, let cool in pans, then pour a generous amount of brandy over top of each loaf. Wrap in foil or place in tightly closed tins to keep. This recipe makes about ten pounds of fruitcake.

Parboil artichokes for fifteen to twenty minutes after rinsing and removing the stems. Cool to handle. Separate leaves slightly and core out a small portion of the center, removing the choke, or fuzz, near the heart, but leaving the bottom intact. Clip sharp thorns from outer leaves with scissors.

Mix dressing ingredients together and place about one teaspoonful into cupped bottom of each leaf, using balance to till center of each artichoke.

Tie string around each artichoke to hold leaves in place, and set closely together in a covered roasting pan. Pour one large can strained, solid pack tomatoes over and around artichokes. Bake in a moderate oven, 350 degrees, for one hour. Serves six people generously.

Blend shortening and sugar. Add egg and flavorings. Sift flour before measuring, then resift with salt. Add to cookie dough.

Divide dough in half and color one-half bright red. Chill all dough for two to three hours in the refrigerator.

Roll dough between hands, a little at a time, to make strips about six inches long. Place one red strip and one white strip side by side on cookie sheet, twist together carefully and curl one end around to shape like candy cane. Sprinkle with crushed peppermint candy or granulated sugar.

Bake at 375 degrees for nine or ten minutes.

Blend shortening and sugar. Add one egg at a time, mixing well. Measure flour, then sift with baking powder and salt. Add to dough, a little at a time. Add nuts and mix well.

Shape into a roll about one and a half inches in diameter. Wrap in waxed paper and leave overnight in refrigerator. When ready to bake, slice thin and place on ungreased cookie sheet. Sprinkle with colored sugar.

Bake at 400 degrees for nine or ten minutes, until light brown. Makes about five dozen cookies.

Melt butter in a skillet. Add onion, celery, Tabasco, poultry seasoning and salt. Sauté until onion is tender, but not brown.

Combine this with bread crumbs and parsley in a large bowl. Add bouillon and toss lightly with a fork until well mixed. Add oysters.

This quantity is enough for one twelve-pound turkey, dressed weight, allowing three-quarters cup per pound. Also excellent for stuffing chickens, pheasant, game hens or other fowl.

Peel and mash avocado. Add and blend other ingredients to taste. Use as a dip with corn chips or as a salad dressing over molded tomato aspic or sliced tomatoes.

Fill a cocktail shaker or electric blender half full of finely chopped ice. Add brandy, port and simple syrup. When ready to serve, add cream and egg white, shake or mix well. Serve in tall tumbler with dash of cinnamon or nutmeg sprinkled on top of foam.

Barbecue steak and cut into small (one inch) slices. Skewer these individually and arrange on a heated platter. Pour on the special sauce, blended to taste. Serve piping hot.

Combine ingredients, shake well and pour over crushed ice to serve. Use double old fashioned glasses that have been chilled in the refrigerator after having their rims moistened and dipped in salt. Above quantity is for one drink.