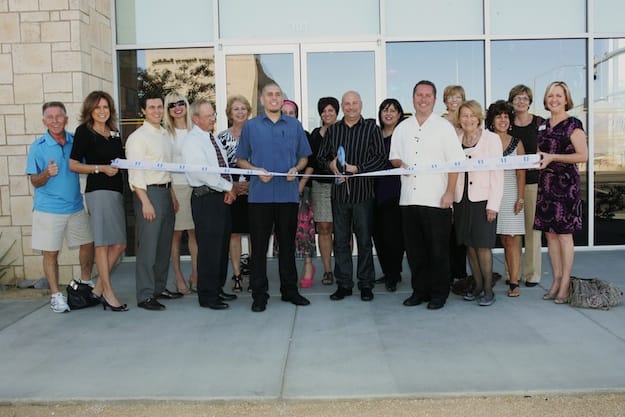 Before the signage, before anyone knew it was called Mic & Moe’s, people came.

And now that everyone knows following the restaurant’s March 13 grand opening in Palm Desert, general manager Barry Fox has high expectations for the very visible location at the corner of Cook Street and University Park, across the street from the University of California-San Bernardino campus at Palm Desert.

“We didn’t say anything, there was no signage on the building and we have been busy every day,” Fox said. “We’re gearing up for what is going to happen after this (the grand opening).”

Fox should be ready. The Chicago suburban native has spent more than 15 years opening restaurants. He was the general manager at the Chop House in Palm Desert and spent 10 years in the San Diego area, leading the conversion of The Shores Restaurant at the La Jolla Beach & Tennis Club to a steak and seafood venue.

“I’m used to working in fine dining, so this is a nice change,” Fox said of Mic & Moe’s. “This is really a new concept for everyone, so that’s why I was brought on.”

Mic and Moe’s features a Build You Own Burger option, handcrafted sandwiches led by Johnnie’s Pastrami Dip Sandwich taken from the original Johnnies Pastrami in the early 1950s in Culver City, Calif. There are also classics like buttermilk fried chicken, a host of gourmet hot dogs, fresh salads and milk shakes.

The restaurant revolves around its kitchen, positioned in the center of the 3,500 square foot space and surrounded by counter chairs to encourage customer interactio

“We want the kitchen to be the show,” said Fox, noting take-out orders are also handled.

There is additional table and booth seating, some wide screen TVs and a sense of breathability from the high ceilings

And don’t expect it to be the last of its kind in the Coachella Valley. Fox hinted another Mic & Moe’s could open within the year.

“The hope is that it will become one of many,” Fox said.