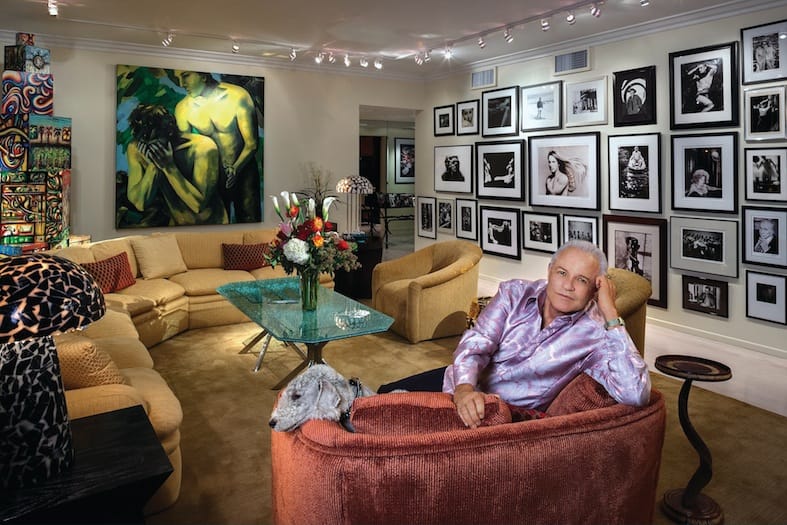 The iconic photos Michael Childers took may not have shown it, but there was often drama behind the images of a Hollywood star.

Childers, who has lived in the Coachella Valley for the past 16 years, recalls he didn’t want to shoot the vivacious Raquel Welch because of a previous run-in with the actress.

“Raquel had me fired from a movie I was working on because I wouldn’t make a financial agreement that she got 50 percent of all worldwide sales of the photographs,” Childers says. “There were a few who tried this. I said, ‘Goodbye.’”

“I said, ‘Me? Are you sure? She had me fired off a movie,” Childers says. “Her agent says, ‘Well, that was an accident. She feels you are the only one who can understand her.’”

“Five photographers had turned down the job saying, ‘I’m not going to work with that piece of work,’” Childers adds. “So I said, ‘How much? No. More, more, more, more. So they finally paid me a lot to go with two assistants, hair and makeup, and a private plane to Las Vegas to photograph her. We got along fine, the pictures turned out great, and she was sweet.” Mary Silverman talks with Michael Childers during the filming of "Hollywood in the Desert Sky."

Childers will share more stories like that Jan. 25 following the screening of a short documentary on his career, Hollywood in the Desert Sky, at the Annenberg Theater in Rancho Mirage.

The program is part of “The Art of Conversation Series: 2015 Speaker Series” by the Palm Springs Art Museum, the Museum Associates Council and Photography Collection Council.

Childers will be joined by Mary Silverman of The Desert Sun, who wrote and directed the documentary; David Cornell, senior curator at the museum, and Donna and Cargill MacMillan Jr. The film was originally screened at the Palm Springs International ShortFest last year, and both Childers and Silverman have been invited to the film’s screening this summer at the Provincetown Film Festival.

You curated your collection down to decorate your Rancho Mirage high-rise home. That must have been very difficult.
Childers: "I have a century of photography in my house. I have 150 photographs of other photographers that I have in storage. I gave some of the best ones to the (Palm Springs Art) museum. These are my children. I can’t quite give them away yet. I change the photos on the walls every 6-8 months. I add three or four. It’s always a live museum. Not just my work on the wall. A lot of great photographers, some were friends. Mary Ellen Mark, Eve Arnold, the great Julius Shulman, Douglas Kirkland."

Where did this partnership for the film start?
Silverman: "Michael invited me to do an at home with him when I was with The Desert Sun. As soon as I saw his home, I thought, ‘Wait, I can’t just put this in print.’ It has to be three cameras, walking, talking, it’s a beautiful space, and I really wanted to capture the essence of the space when we were talking."

Would you like to see documentary taken beyond its current 17 minutes?
Silverman: “This is definitely a story worthy of time. The stories he tells are just brilliant, and to get some of the people who are involved in these stories to contribute their experiences working with Michael would be quite extraordinary. And those who were there during his 37-year relationship with (former Academy Award winning director) John Schlesinger would be a beautiful story. I would very much to be able to make that happen at some point.” Michael, how do you establish a rapport with a subject?
“Usually, I like to talk to them over the telephone, discuss ideas of where we are going with a session. I like to art direct a shoot before it happens, with costumes, with attitude, sets, what location, studio or on location, and I discuss some of this with the person. Hopefully they will go on a ride. Once in a while, if you’re lucky, you get a real collaboration with a subject, and they bring a lot to the table. I love those sessions. Henry Rollins was the best. He was great. He just knew. Elton John just loves photography, so he had lots of ideas. That makes it really exciting. People who know photography well, like Cher. She knows lighting. You got a great sense of what you can get with Cher."

Who was your worst subject to photograph?
“Harrison Ford was a nightmare. He showed up. Hadn’t shaved. It was 9:30 in the morning and he smelled like beer. He had had a huge fight with his wife that he eventually broke up with. He was in a bad mood. I said, ‘Harrison, maybe we should do this another day.’ He said, ‘Just deal with me.’ He was grumpy, grumpy.”

Would you like to shoot any of the stars of today?
"You would have to live in LA or New York to do it. The actors today are better trained and smarter than the ones of 40 years ago. It’s tough out there. If they don’t have two movies that do well, they are out of the business. Julianne Moore. Emma Stone. Jennifer Lawrence, I love her. They are well trained. Smart kids. Most of them have a real individual style and look."

So what do you take photos of now?
"I have landscapes, dreamscapes, fantasyscapes, photo shows and gallery shows. I live off my archives, too. I lecture on cruise ships. It’s a free vacation. A $40,000 suite. In fact, I’m leaving on Monday (Jan. 26) to go to New Zealand."

How far back does your connection to Palm Springs go?
"In the late 1950s, my grandparents moved here. My grandmother ran Palm Valley School, which at that time was in Cathedral City. My grandfather was in real estate development. So I used to come down and visit. You know Palm Desert, there was nothing there. Nothing. I think there was a Denny’s and The Nest. When I visited them, I would run over to Palm Springs because it had all of the great famous stores, I. Magnin and Saks, and it had bookstores everywhere. That was my first exposure. My first summer at UCLA I was hired as a lifeguard at a Christian girls day camp in Idyllwild."

Did you ever envision yourself living here full-time?
“No! I always liked coming here. (My partner) John Schlesinger would always rent houses and come here for vacations. He liked it a lot. When we were leaving LA and selling our Beverly Hills house, we decided to get a house to come here in the winter because we lived in London, England – where we lived for 32 years –  and bought a place here up in Andreas Canyon. But he had a stroke here and we dealt with his illness for three years and I ended up in Palm Springs, and I like it. I have been here 16 years. I don’t think I’ve stayed anywhere other than England for that long.”