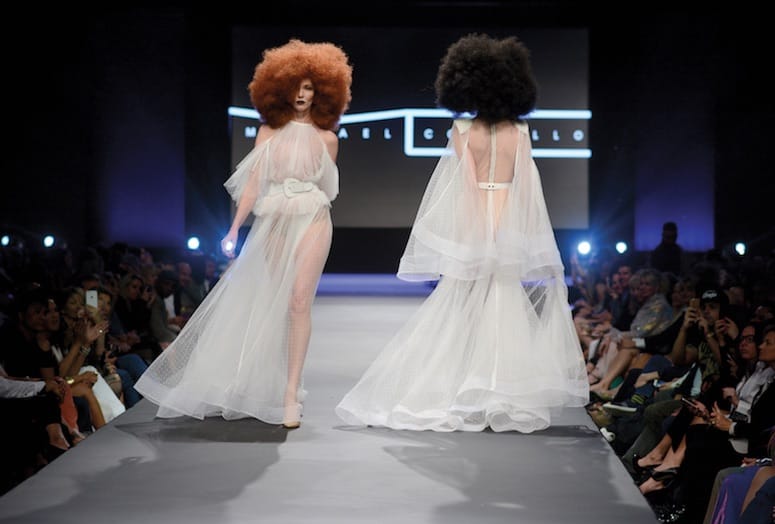 “I’m really strategic about who I pick and who I like for the show,” Michael Costello says of his annual Project Runway lineup at Fashion Week El Paseo."
PHOTOGRAPH BY ARIANA BINDMAN

Michael Costello is not one to work leisurely. “I love to beat the clock,” the designer says. “I always tell people that if God hired me, he would have had the world done by Thursday.”
Indeed, deadline pressure is what motivates him — a good thing, as he works overtime to complete two collections for Fashion Week El Paseo 2018.

A native of Palm Springs (with a star on the city’s Walk of Stars), Costello has been a significant  presence at Fashion Week El Paseo for seven years, showing both his own work and that of designers he hand-selects from various seasons of Project  Runway. Costello himself leapt to fame after appearing on season eight of the reality show in 2010.

This year at Fashion Week El Paseo, he’s debuting a swimwear line as part of the opening-night show,  “California Dreamin’,” and presenting a new eveningwear collection alongside the Project Runway crew. “I can’t wait to see people’s reactions,” Costello says of his move into swimwear. “It’s totally different from anything we’ve ever done.”

Just don’t plan to do laps in your Costello maillot. The collection, he says, is “for the woman who doesn’t even want to go swimming; she just wants to look fabulous poolside … Of course, they’ll be in really fun and exciting fabrics, but you and I both know that she has no time to swim. She has time to look fabulous while she takes her selfies.”

Meet & Greet with Michael Costello
and His Friends
From Project Runway

Free to the general public

Free to the general public

Swimwear is not the only first for Costello this year. The Project Runway show will celebrate diversity on the runway, with not only plus-size models but women of various ages, up to their 70s. That sort of accessibility, and the fact that he’s premiering his  collections here rather than in New York, is all part of his strategy to appeal to the clientele of his hometown.

“I love the production we do at El Paseo Fashion Week,” he says. “Each year it gets bigger and better. Not only are my friends here, my family is here, my  clients are here. The women who shop and wear Michael Costello and support the brand are all desert natives; if not, they live in the desert. They love  California, and they love our style. So I felt like designing an ultimate collection for home.”

In the eveningwear collection, expect to see variations on his signature dramatic shoulders and mermaid silhouettes in rich tones — gold, emerald — and raised textures, including velvet. 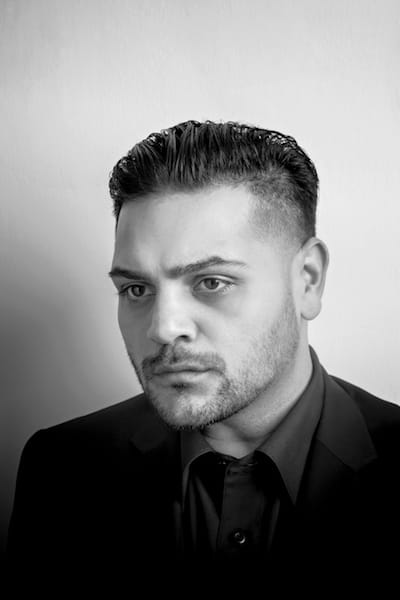 “I love the production we do at El Paseo Fashion Week,” Michael Costello says. “Each year it gets bigger and better.”

In addition to the couture line, Costello has a ready-to-wear collection via online boutique Revolve. And he’s been beefing up his résumé with a dream job on the FX series The Assassination of Gianni Versace: American Crime Story, creating  costumes for the character of Donatella Versace, played by Penélope Cruz. Costello is part of the team led by costume designer Lou Eyrich, with whom he previously collaborated on American Horror Story: Hotel, dressing the character played by Lady Gaga.

“It’s one thing to see your dresses coming down the runway and on the red carpet, but it’s a totally different feeling when you’re watching them on television as part of a show, especially if you’re a fan of that show,” Costello notes.

The pieces he created for Cruz incorporate original safety pins from Gianni Versace’s iconic collections of the early ’90s. Working on the FX production was “surreal,” Costello says, recalling how, as a teenager, he met Donatella during a book signing in Beverly Hills. “There was a swarm of people outside, and my  dad, being the hustler that he is, got us in and said,  ‘Donatella, I want you to meet my son. He’s a designer.’ She was really lovely. She only gave me about two  minutes of her time — but hey, at least I can say that I’ve met Donatella Versace.”

Costello does more than that for the alumni of Project Runway, for whom he sees himself as a mentor. He’s quite particular about whom he features in his show for El Paseo each year, favoring designers who “have their own unique, eccentric style” but also are widely diverse. “I don’t want to show something that’s just all evening, or all jumpsuits, or all swimwear or outerwear. I did my research on who’s different from each other so that when we do El Paseo Fashion Week, we’ll see many points of views, and there’s something for everybody.”

He says he fell in love with the collection of  Kentaro Kameyama, the winner of the latest season of Project Runway, when he saw it at New York  Fashion Week and told him, “You have to do my show.” But beyond showcasing the creations of Kameyama and the other nascent Project Runway designers at El Paseo, Costello wants to help them develop their careers in the long term.

“Once you do the show, you get so many different opportunities, and so many people who try to tell you that this is going to be your big break, this is the direction you need to go in. Kentaro is such a talented designer; I just don’t want to see anyone take advantage. I hate to see all these designers who are very talented not really know where to go after Project Runway. I like to try and give them a platform and introduce them to stylists, help them to get product placements, and give them the opportunity to not only sell their collection but to build a clientele to help them establish a brand and keep going.”

“I did my research on who’s different from each other so that when we do El Paseo Fashion Week, we’ll see many points of views, and there’s something for everybody.”Michael Costello

These Project Runway Alumni are making it work as they embark on the next step in their careers.

After studying at  the Fashion Institute of Design and Merchandising in San Francisco, Cuoco started a line of leather couture for women. Last year, she opened a 2,300- square-foot showroom and studio in downtown Los Angeles. She finished fourth in season 16 of Project Runway and competed on the most recent season of Project Runway All Stars.

Wong interned for Zac Posen while earning his degree in fashion marketing from the Arts Institute of Philadelphia. He launched his own brand in 2011, specializing in “denim innovation” featuring hand-dyed prints and geometric shapes. Wong placed sixth in season 15 of Project Runway.

St. Louis–based Baker earned a degree in design, merchandising, and textiles from Western Kentucky University and studied fashion design at the Accademia Italiana in Florence, Italy. She took fifth place on season nine of Project Runway and sixth place on season two of Project Runway All Stars. She now works with Lifetime on casting the show’s designers and is an adjunct professor at Washington University. She is also a fashion and art consultant and works with her family’s business, Exotic Motors Auto Group.

The most recent Project Runway winner — he took the title last year, in season 16 — was born in Japan and is based in Los Angeles. Kameyama graduated in 2015 from FCI Fashion School, where he currently teaches. An accomplished classical pianist and composer, Kameyama composed the score for his runway debut at New York’s Fashion Week.

Born in Guadalajara, Mexico, and raised in Los Angeles, Luna attended the Fashion Institute of Technology in New York, where he is now based. He worked as a production assistant for Zero + Maria Cornejo prior to launching his first collection. Known for their dark sensuality, his clothes have been worn by the likes of Laverne Cox, Ciara, and Lil’ Kim. Luna placed third in season nine of Project Runway and fifth in season three of Project Runway All Stars.

Having received a master’s degree of design from the School of the Art Institute of Chicago (and interning for Alexander McQueen and Nick Cave), LeBlanc works  as an assistant professor in the College of Design at North Carolina State University. Recognized for his use of 3-D printing and innovative textile manipulation, LeBlanc finished in third place in season 12 of Project Runway.