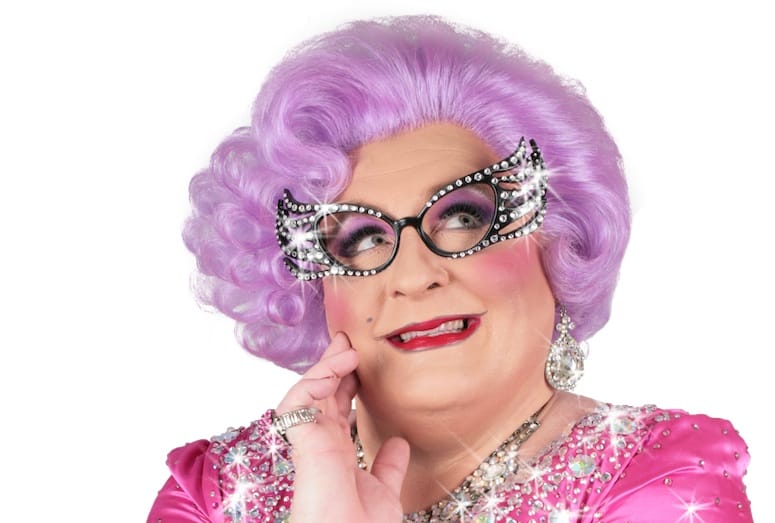 “It was never my intent, dream or goal to put on a frock to dance around insulting people,” says Celebrity Impersonator Michael Walters as Dame Edna, who appears Feb. 9-10 at the Purple Room in Palm Springs.

A funny musing from an entertainer who finds joy in making people laugh as the internationally adored character Dame Edna, created by legendary comedian Barry Humphries.

The persona of Dame Edna is known for her, as Walter’s puts it, “crass but never vulgar, risqué even edgy but not dirty, suggestive and double entendre delivered with a wink mixed with innocence and honesty.”

Adding, “ I adore portraying the character because she can say anything and almost does…she says God awful things in such a nice way!”

Walters brings his own interpretation of Dame Edna, making it his own but noting, “This is not a parody. I want to be true to the character… to emulate, interpret and honor the foundations of the brilliant actor that is Barry Humphries. It is my tribute to the legend.”

Walters and his partner, Doug Michael Lucas, both wear multiple hats in creating an intimate stage (with Edna’s signature gladiolas) to spark the audience’s imagination.

Walters has perfected this presence after 14 years portraying the Dame Edna character from a lifetime of mimicking. Growing up in Arkansas, Walters says he entertained himself with his grandparents’ immense collection of Broadway musical cast albums, such as Camelot and Carousel.

“These albums told stories and it was a transformative experience,” he says. “I learned to imitate people, to listen to the recordings and mimic them. I started singing at a young age, and I knew singing and acting is what I wanted to do.”

Walters, an accomplished singer and Broadway actor, explains his portrayal of Humphries, Dame Edna, did not come easily.

“I was doing a hideous Mystery/Murder dinner theatre and I had to play a psychotic cooking host,” he recalls. “I was a quirky guy in drag and I sounded like the Dame Edna character. I began to start doing the character as best I could at the time, and people starting seeing it and asked to appear at events. I had to buckle down and learn what made this character tick if I was going to be faithful and carry it off with some degree of accuracy.”

Walters has also received a nod from Barry Humphries himself.

“I gave him a CD of a Broadway concert show I had done and he gave me the greatest compliment," Walters says. “He said, ‘If I could sing like you I would never have to put on a frock.’ And I replied, ‘If I were funny as you I would never have to open my mouth.’ He was lovely and kind and wished me nothing but the best. It was a testament to what a gentleman he is…how gracious for allowing me to play his character.”