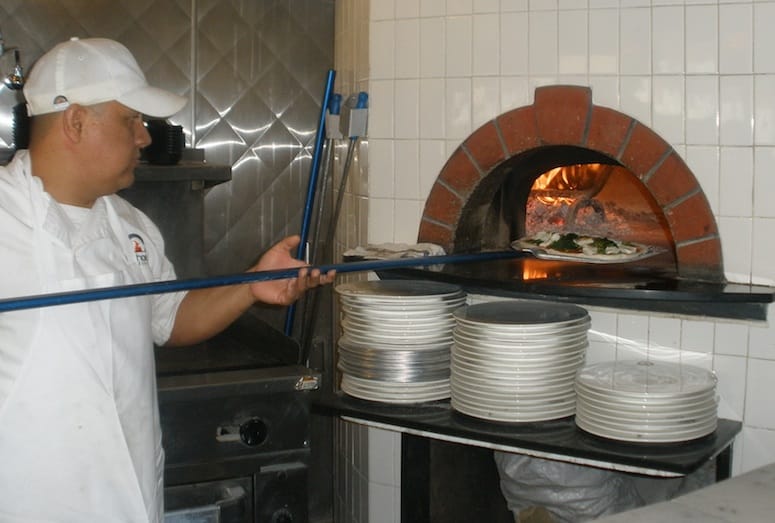 You may get an argument about whether there are four seasons in the greater Palm Springs area.

But not at Michael’s Pizzeria at The River in Rancho Mirage.

“All Michael’s restaurants, from the fine dining Michael’s on Naples to the pizzerias, source locally as possible for the best, farm-to-table ingredients,” says Allan Rietveld, sous chef and kitchen manager for the Rancho Mirage location. “I love working for a place that changes seasonally; there’s always something different, something new.”

“The menu changes every four months to reflect the seasons,” adds Manager Sheila Rae Mazza. “Two weeks ago the spring menu came out with several new dishes in each category.”

“Sorbets are never ending,” said Rietveld. “I just made a vanilla-orange one, also fresh strawberries, and raspberry-lime — whatever looks good and is in season!”

What’s New on the Menu Fava beans, a staple of Mediterranean cuisine in springtime, are served as an antipasti, chilled with shaved pecorino cheese, and on a new pizza with salami, tomatoes, Calabrese and Michael’s famous house-made fresh mozzarella cheese.

One of the calzones changes up to combine house-made sausage, ricotta, mozzarella cheese, and English peas; and the Gnocchi alla Bolognese has a lighter beef and veal meat sauce for the season.

Michael’s sources predominately Italian wines listed not only as red or white, but also by their flavor and acidic profiles, marked with dotted symbols (like dice) that connect to the suggested wines paired on the menu.

For example, vino bianco (white wine) that offer “bright acidity, generous minerals and a crispy finish” – like pinot grigio and Prosecco — have a single dot symbol.  Find this symbol next to the salads and certain pizzas, and “connect the dots” for a perfect match.

In addition to the Italian wines by the 6- or 9-ounce glass or bottle, Michael’s also offers four California wines on tap that rotate frequently. On tap this month are Trefethen Riesling, Hess Chardonnay, Aiden Pinot Noir, and Liberty School Cabernet Sauvignon.