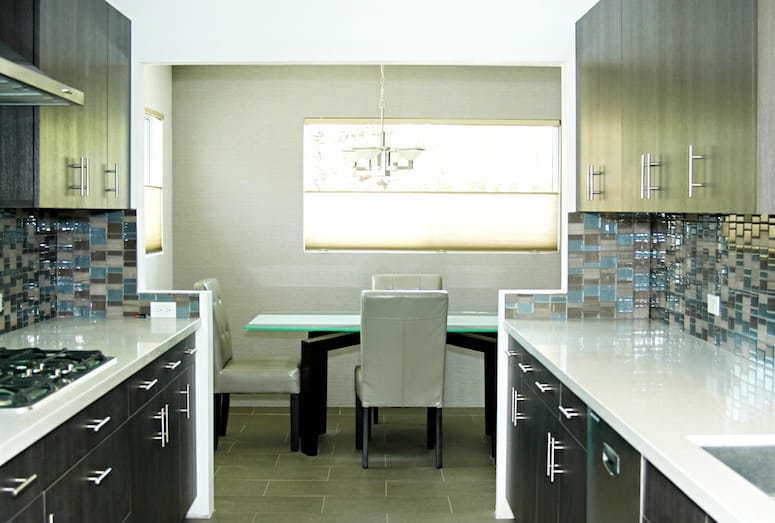 Bringing the outdoors inside literally took on a new meaning in this breakfast room and kitchen project by Dino Raimondi of Dino Designs in Palm Springs.

The original layout of this 1954 home, located in the Tahquitz River Estates area in Palm Springs, had an open breezeway off the back of the house that really didn’t serve any practical purpose.

To enclose the breezeway, all Raimondi had to do was add two small walls, a window, and a sliding door.

“What was so beautiful, I thought, was to be able to stand while you’re cooking and look straight through to the spill of the jacuzzi into the pool,” he says. “And with the screen open, you’ll be able to hear the water circulate. It also elongated the whole kitchen. You’ve got the dining room on one side, the kitchen in the center, and then the breakfast room on the opposite end.” A view of the original breezeway from the backyard. This is the area that was enclosed to create the new breakfast room The breezeway after it was framed out and dry-walled. Adding a window and the sliders brought even more light into the space. The patio next to the old breezeway was also enclosed to create a new family room.

There was an existing window (above the sink) that previously looked out to the patio so Raimondi decided to put it to great use by adding a bar in the family room. “So it’s like a pass-through now,” he says. “It makes sense that there would be a kitchen sink near a bar and it allowed that window to remain and serve a purpose at the same time.”

For consistency, Raimondi used the same veneer finish on the bar as he did on the kitchen cabinets.

The putty gray, 12-inch by 24-inch floor tiles were used throughout the house. “It’s a popular size,” says Raimondi, “And grays are very hot in design trends this year. For example, in Calvin Klein bedding you’ll see some gray, and hues of cobalt and indigo. I wanted to bring in something very current.”

The cabinets also have a blueish-gray tint to them.

Raimondi adds that he had wanted to use this particular backsplash tile. “I thought it was the perfect midcentury application and a little unique because it was irregular,” he says. “Most of the rectangular and square shape tiles are all very systematic in their approach to design. I like the irregular shape, and the mix of stone and glass, in this one.” Raimondi custom-designed the breakfast room banquette with leatherette on the seat and a striped fabric for the back. “Instead of the low tables, you could also merge the banquette with a rectangular-shaped dining table,” he says.