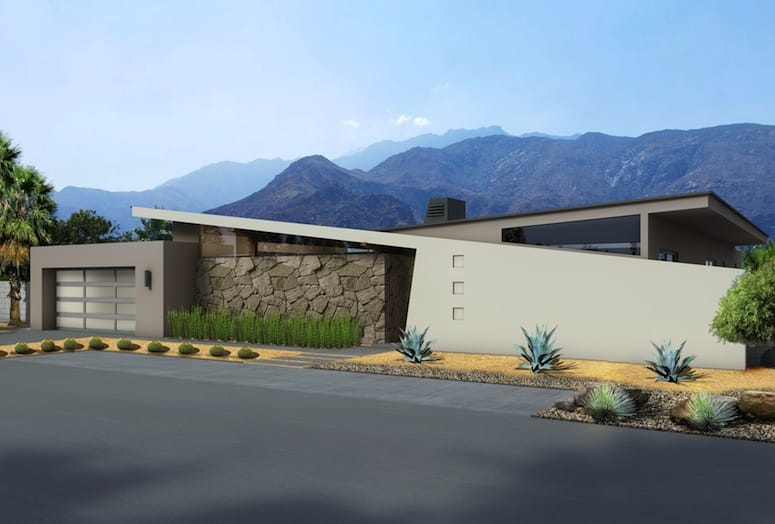 Normally, the news that three new midcentury-style, single-family homes were being built in the Little Tuscany neighborhood of Palm Springs wouldn’t cause much of a stir.

But these particular houses were designed by the well-known midcentury architect Hugh Kaptur, who has been leaving his innovative stamp on the desert since he first arrived in 1954.

The homes are being constructed by Bradley Lorne Homes, a residential real estate development firm that specializes in the acquisition and restoration of midcentury architecture.

“The company is helmed by CEO Brad Weflen who is a self-proclaimed modernist,” says realtor Neil Curry of NDC Homes, Inc. who works with Bradley Lorne overseeing and facilitating each home restoration. “Brad integrates exceptional architectural design, both in the interior and exteriors, while doing everything possible to meet the demands of today’s midcentury enthusiasts.” Almost 60 percent of the back of the house is constructed with floor-to-ceiling glass.

Their project with Kaptur enlisted the architect to reinterpret one of his late 1950s designs and create a 21st-century home with a nod to the original plans.

Curry’s relationship with Kaptur began in 2012 when Curry was approached about listing and selling an original 1950s Kaptur home in Desert Park Estates in Palm Springs. “I presented the opportunity to Brad Weflen [and] once the home was acquired by Bradley Lorne Homes a partnership was formed between us and I was hired on to facilitate the restoration of what was a rundown shamble of a house,” Curry says. “In doing so, I sought the advise of Hugh Kaptur and our relationship began.”

After purchasing and restoring a number of Kaptur's Desert Park Estate homes, Weflen and Curry approached Kaptur with the idea of having the architect reinterpret the midcentury plan he did for Ranch Club Estates, a group of modernist-style tract homes by developer Noel Clarke, into a design for a 21st-century home.

“Kaptur loved the idea and the [Kaptur Court] venture was born,” says Curry. “Hugh and I began collaborating on the design in the fall of 2013. Our goal was to have him interpret his late 1950s plan into a larger square foot home that would include high-end finishes and accommodate how we live today—all while keeping the integrity of the simplicity of his brilliant 1950s plan.”

Hugh Kaptur began collaborating on the design of Kaptur Court with Neil Curry in 2013.

“The floor plan is a little more open now,” says Kaptur. “The kitchen and dining area is all in one room with a fireplace and glass going out to the pool area. In the front there’s very little glass, only high glass, so from the street these houses are very private, but from the back they’re open with all glass [looking out] to the pool area.”

“And of course fully insulated,” adds Kaptur. “The old ones back in late 50s, Krisel and Cody and Wexler, the houses they were designing were with real thin roofs. They were using the post and beam construction with the eight foot on center and then using T&G [tongue and groove] sheeting to span that so these places had wood roofs but they didn’t put any insulation on top of that because they wanted to have a thin line.”

“Me, coming from the east, from Detroit, all of the homes were insulated back there and I thought, ‘with the heat here, and the cool, cold winters I felt I have to insulate my houses.’ So instead of using the T&G sheeting, I went to joists where we could put insulation and so the roof line instead of being 3/3.5 inches thick, we were 10 inches thick. But even now, that’s been upgraded to joists to handle the insulation that’s now required.”

Each of the homes will sit on approximately one-third of an acre. Curry notes the interiors will flow seamlessly to the exteriors and that approximately 60 percent of the back of the house is floor-to-ceiling glass. Other features will include 24-inch by 24-inch Italian terrazzo flooring, Fisher & Paykel appliances, kitchen and bath fixtures from Grohe and Axor, and Fleetwood windows and doors.

There will also be classic midcentury elements such as rock-accented walls, clerestory windows, and an angled entry and facade. “The outdoor features will be amazing,” adds Curry. “We plan on doing a large swimming pool, spa, and an outdoor dining/grill/bar area for entertaining.”

The homes will be completed and offered for sale just as Modernism Week 2016 launches and prices will start at $1,395,000.