Music has the capacity to stir emotions and provoke thought. But only a select few are blessed enough to be part of a creative legacy that forever changes the musical landscape and profoundly influences performing artists for decades.

Mike Love and The Beach Boys certainly fall into that category.

Love and the group’s impact on music history are undeniable. Love became one of rock’s leading songwriters, the brainchild behind Surfin’, the group’s first hit, and he went on to write the classics Fun, Fun, Fun, I Get Around, Help Me Rhonda, California Girls, and Good Vibrations, which garnered a Grammy nomination.

• Need some ideas of what to do this weekend? Click HERE.

While some successful songwriters could have rested on one’s laurels, Love surprised many by co-writing the chart-topping Kokomo in the 1980s. Decades later, in 2016, the band celebrated the 50th anniversary of Good Vibrations and Love’s memoir, Good Vibrations: My Life as a Beach Boy, hit the New York Times bestseller list. A year later, the world found Love releasing a special double album through BMG entitled Unleash the Love. It featured 13 previously unreleased songs and 14 re-recordings of Beach Boys classics.

Spreading the good vibes extends beyond the stage, too. The band continues to tour and Love’s Love Foundation supports national environmental and educational initiatives.

Your songs resonate through the decades but why do you think we still love the Beach Boys so much?

I guess it’s that we are the quintessential American band. If you look at the songs we sang originally— Surfin’ Safari, Surfin’ USA, Catch a Wave, I Get Around —songs about cars and surf and California girls, mostly about fun and upbeat things. Our biggest hit of the ’60s is still Good Vibrations, and that was at a time in society when things were pretty dynamic. Flower Power was going on.

Right. A significant time in history.

I wrote the lyrics of that song and put it on my cousin’s Brian [Wilson’s] amazing track. Not only did that song resonate in California but with people all around the world. It was phenomenal and it sure beat a “real job.” 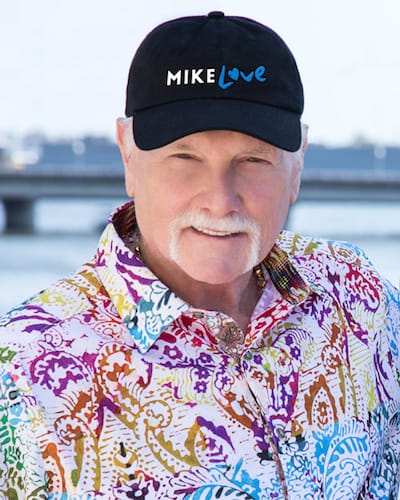 Mike Love: "As a person who has been surrounded by music all of his life and who has made a career out of a family hobby, [performing] is a pure blessing."

When you were writing Good Vibrations, did it occur to you that it would something that would go anywhere? Or was it a kind of stream-of-consciousness moment—creating it?

Brian worked the track for several months and we had done sections of Good Vibrations at several studios over several months’ time. I actually dictated the lyrics, which is actually a poem about a young woman; the typical imagery of the 1960s, a hippie girl who was all into nature and peace and love and everything. That was the inspiration initially. The Beach Boys were influenced by those changes as well as everybody else. It was all about that time period and change.

It’s better than ever. When we first started out we had a station wagon with a U-Haul trailer with our amplifiers and drums. And then, all of sudden, we found out there was this person called a Roadie. Nowadays, we have a wonderful crew that sets everything up for us and we have wonderful touring busses—one for the crew, one for the band.

Actor/musician John Stamos will be with you on stage here.

Yes. He performs with us [on drums]. You know, he’s a father now and he brings his wife and child on the road with us whenever he can. He grew up in Southern California and rode his bicycle by my parents’ house and saw the gold albums on the wall. He’s been a lifelong fan. It’s fun to have him around. He’s really a great performer and had a three-piece band in Southern California before he became Blackie on General Hospital.

What do appreciate most about performing and being a musician?

The performing part of it is the sweetest part because you come out on stage and you see that music can create so much joy and transcend all the problems a person can have, and maybe for a few minutes or a few hours, it can transport people to a place of happiness. [performing]

Is there one Beach Boys song that epitomizes you?

Good question. Well, I have the song Unleash The Love [from my second solo album] that is performed in the first set when we tour the show. It’s a song that I wrote as a result of being a life-long meditator. The whole point of meditation is to create more happiness throughout the world, and more empathy and clarity in the individual in the process. That’s an important message to me. I’m all about increasing positivity. It’s surely what the world needs.