Against a starry backdrop of the Plaza Theatre, The Milk Carton Kids — Joey Ryan and Kenneth Pattengale — made their first Palm Springs appearance.
PHOTOGRAPHY BY YASIN CHAUDHRY

“That’s the way they used to find their own way home, by the stars,” The Milk Carton Kids warble on their 2013 song “Hope of a Lifetime.” At the historic Plaza Theatre, the Grammy-nominated, acoustic folk outfit made audience members feel right at home — and stood framed by a twinkling curtain of starry lights to prove it.

Joey Ryan and Kenneth Pattengale formed The Milk Carton Kids in 2011, naming themselves after an early cowritten tune of the same title. The duo headlined the Oasis Music Festival’s inaugural year, supporting the Save the Plaza Theatre Foundation’s efforts to restore the iconic Palm Springs venue. 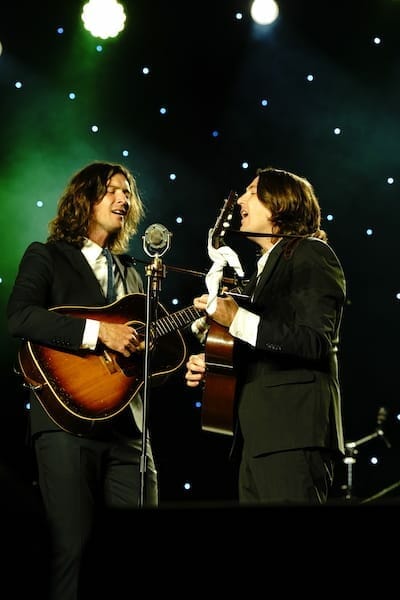 Ryan and Pattengale opened their set with the yearning 2011 ballad “Permanent.” Each plucked an acoustic guitar as they crooned together into a single mic. Small in number but mighty in sound (“For those unfamiliar with the band, this is the whole band,” Ryan joked), they interspersed their velvety harmonies with Pattengale’s intricate instrumental solos.

Between mournful melodies and lively folk tunes, the pair paused to playfully banter with one another — and with the audience. When one die-hard Milk Carton Kids admirer shouted, “Play ‘Undress the World!’” Ryan nodded to the paper set list beside his feet.

“We’ve got a whole plan for you, sir,” he quipped. “And, unfortunately, we don’t take requests.” 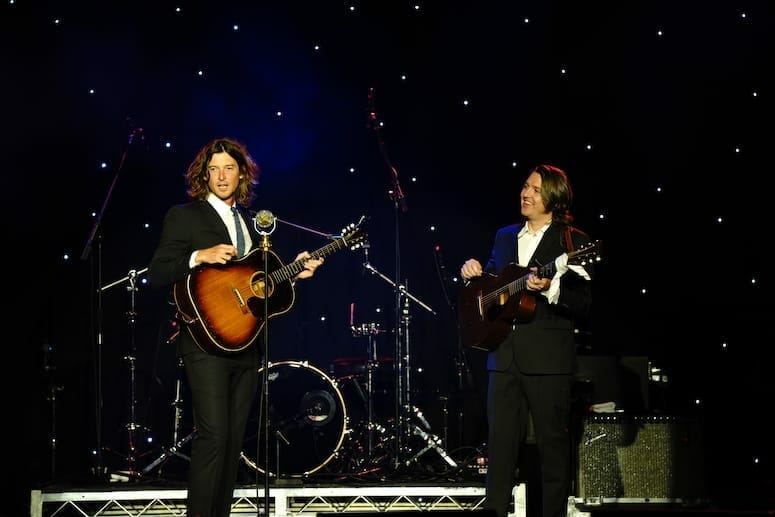 While that fan’s top pick was not on the evening’s agenda, the band’s devotees got to sing along to favorites like “Michigan” (2011) and 2013’s twangy “Honey, Honey,” which the pair shared live during their 2015 appearance on The Conan O’Brien Show. They exited the stage to a standing ovation — only to reemerge and surprise ticketholders with two more tunes.

“This is our first Palm Springs show,” Pattengale revealed before the pair’s final bow. “I hope they save this place so we can come back and play it again.”

A portion of the proceeds from the Oasis Music Festival will support the Save the Plaza Theatre Foundation’s capital campaign to restore the iconic venue.

The May 13 card at the Plaza Theatre starts at 5 p.m. with Coachella's own The Flusters, followed by Thee Sacred Souls, Y La Bamba, The Dip, and Lee Fields and the Expressions. Tickets: oasismusicfestival.com/tickets.