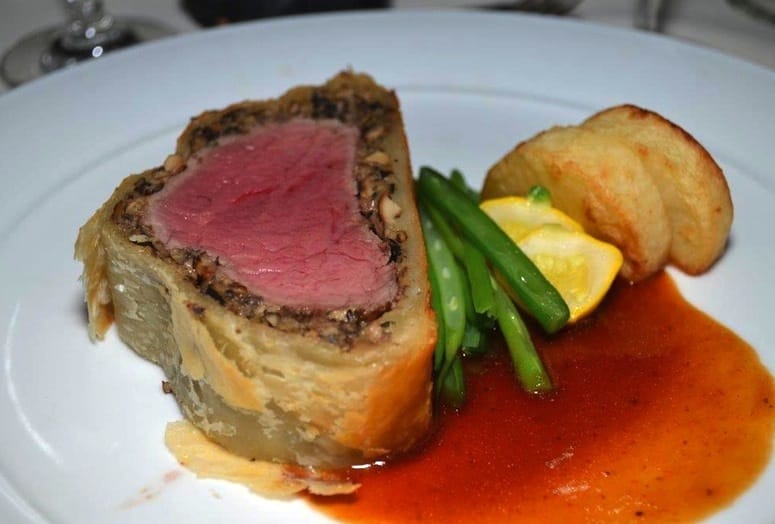 When Chuck Purrington of Ste. Michelle Wine Estates “curates” a selection of wines rated 90 and above by Wine Spectator and Wine Advocate for a five-course dinner expertly paired by Master Chef Adam Votaw, you know you’re in for an exceptional evening.

Those attributes certainly played out in his classic menu that began with shrimp brochette; brie, walnut and orange canapé; prosciutto and melon spoon, and smoked duck stuffed date hors d’oeuvres.

However, the meal was Votaw’s “swan song,” as the world-traveled, Zagat award winning chef has accepted a corporate chef position with Noble House after only a brief few months at Miramonte.

“The story is here about this wonderful property,” says Votaw. “The history and people here – it continues.”

The Wines and Pairings

Ste. Michel Wine Estates represents more than 250 wineries from around the world, said Purrington. His curated selection leaped from France to Napa, Calif., to Piedmont, Italy, back to Napa, and finished with a late harvest Riesling from Columbia Valley, Wash.

Although the wines are highly rated, Purrington described some as “underdogs” because they are not as widely known, nor as widely available.

With the passed hors d’oeuvres, guests sipped Champagne Nicolas Feuillatte Brut, produced on a property some 45 miles from Paris, according to Purrington.

The starter course, a panko-seared halibut with roasted baby artichokes, oven tomatoes and lobster nage, was paired with a light, crisp Antica Chardonnay from Napa valley, rated 92 by the Wine Advocate.

“Bringing 600 years of wine making in Italy history to the past 30 years in Napa, (winemaker) Piero Antonioni has had a long love affairs with Napa,” says Purrington. “This wine is all estate grown at a 1,400-foot elevation, from vine to bottle.”

The second course offered Prunotto Barbaresca, a light red wine from Piedmont, Italy that was not overpowering. It was fruity, but held enough tannin from aging one year in French Oak and another year in the bottle.

The wine was paired with pan roasted duck breast (pictured above) fanned over a bed of mache, frisee, green oak and baby greens with a tangy kumquat glaze.

“Fay Vineyards is grown on alluvial soil, with both fire and water qualities,” he adds. “(This Cabernet) is so approachable yet can mature 20 to 30 years.”

Dessert was a sphere of chocolate mousse enrobed in dark chocolate fondant topped with a blackberry (pictured at left). The wine, Chateau Ste. Michelle late harvest Riesling from Washington, was sweet but had enough acidity to balance the rich chocolate.

Next Le Serate di Vino
Miramonte’s wine series concludes March 21 with a Tuscan family-style reception and dinner that takes place in the resort’s olive grove. A selection of fine wines from Tuscany will be paired with Italian-inspired cuisine served over five courses under the stars.

Cost of each event varies with dinner prices starting at $75 per person. Seating is limited.