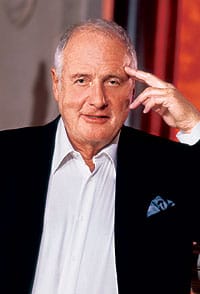 In a career in which he promoted concerts for Frank Sinatra and Elvis Presley, ran a movie studio, and produced hit films — such as The Karate Kid series, Diner, Oh God!, and the 2001 blockbuster Ocean’s 11, Jerry Weintraub has reached the pinnacle  once again. Andthis time it’s not only a business metaphor.

For one thing, he’s gearing up for the Dec. 10 release of Ocean’s 12 — a sequel with a bigger budget than the original, more cosmopolitan locations, and more star-studded cast (Catherine Zeta-Jones joins the ensemble of George Clooney, Julia Roberts, Brad Pitt, and Matt Damon). Weintraub also recently moved into a new 10.000-square-foot home at Bighorn Golf Club in Palm Desert, atop a mountain offering a panoramic view of the valley. “It’s a peaceful place to sit and drink my vodka in the evening,” he says.

Among other amenities, the seven-bedroom, 11-bath home features a 30-foot waterfall, a re-creation of an English pub, and 35 plasma-screen televisions — atop outdoor fireplaces. The master bedroom features a glass floor, with a swimming pool below and beyond it, giving the illusion the bed floats on the water. “These are things that I wanted,” he says. “They’re all things that mean something to me. It’s pretty wild. It’s an incredible house.”

The proud homeowner invited the Ocean’s 12 cast, Diane Sawyer, and an ABC television crew to the house in November for a TV special about the film. The deadline pressured Dreier to finish the project, which took a year to design and 18 months to build.

Weintraub, 67, first came to the Palm Springs area in the 1950s, when he was working for Sinatra and Presley. They both had places in the desert, and he often visited to mix business and pleasure. He was hooked and has been coming back ever since. “I fell in love with it,” Weintraub says. “To me, the desert is the most relaxing place in the world.”

Before Bighorn, he owned homes in Palm Springs and Rancho Mirage. He also owns homes in Malibu, Beverly Hills, and Kennebunkport, Maine. “I came from Brooklyn and the Bronx. I upgraded,” he said, grinning.

Yet no matter how scenic or plush his other homes may be — his place in Malibu is evocatively named Blue Heaven — he prefers to spend most of his time in the desert. “This year I’ll spend the whole winter out in the desert,” he says, relaxing in an overstuffed chair in his office at the Warner Bros. lot in Burbank.

A self-described “golf nut,” Weintraub plays Bighorn and The Quarry at La Quinta, the courses he calls “the most spectacular out there.” He’s been playing golf since he was 21 — “Forty-six years! But that doesn’t mean I’m any good.”

At least he’s passionate about the game.

When not on the links, he dines at Ristorante Mamma Gina in Palm Desert, Le Donne Cucina Italiana in Palm Springs, or Ming’s in Rancho Mirage. And he takes in the shopping and fine art along El Paseo.

“When I was going [to the desert] in the old days, everything was much smaller,” he says. And since the time when he was palling around with Sinatra, Sammy Davis Jr., Dean Martin, and others in Palm Springs, “the desert action has shifted — it’s gone to Palm Desert, out to La Quinta” and attracted a different crop of celebrities, such as Pete Sampras, Barry Gordy, and Kurt Russell and Goldie Hawn.

“There are a lot of people from the business coming down there now,” he continues. “Brad Pitt goes there. Clooney likes it there. All the younger actors — it has become hip again. They’re rediscovering how fantastic it is.”

So, by making the desert their retreat, Clooney and company are again following in the footsteps of Sinatra and the original Rat Pack. This, after remaking their 1960 version of Ocean’s 11.

Why a sequel? Simple, Weintraub replied: The 2001 Ocean’s 11 grossed more than $460 million worldwide. “That’s one reason,” Weintraub says. “The other reason — we came up with a better idea than the first one.”

The sequel has Danny Ocean (Clooney) reassembling his merry band of thieves three years after they stole $160 million from the Las Vegas casinos of Terry Benedict (Andy Garcia). They head to Europe for an even more spectacular heist, chased by Benedict and an Interpol agent played by Catherine Zeta-Jones.

A third reason for a second installment, Weintraub says, is that everyone from the first one returned. Steven Soderbergh directs, and even the movie trailer stresses the point about the cast: “They’re back. Yes, they’re all back.”

“And we shot it in the most beautiful locations in the world,” he says, with cast and crew hopscotching from Amsterdam to Paris to Monaco to Rome. “That’s not hard duty. We had a lot of fun.”

He thinks the sequel has a chance for even greater success than the remake, and then stops himself. “I don’t predict. I don’t want to give myself bad luck.”

But Weintraub has made a career of striving to create his own luck. In the way that famed Brooklyn Dodgers executive Branch Rickey noted, “Luck is the residue of design.”

As a youth, Weintraub sneaked into the Luxor movie theater in New York so often the manager gave him a job as an usher. After his discharge from the Air Force, he worked days in the mailroom at the William Morris Agency and nights as an NBC television page. When he heard about an opening at Lew Wasserman’s MCA Talent Agency, Weintraub made the call from the William Morris mailroom and got the job — catapulting him from mailroom clerk to talent agent in three weeks.

Perhaps his greatest display of tenacity, though, started with a dream about Elvis. After several years at MCA, Weintraub left to manage acts such as Joey Bishop and The Four Tops and joined forces with two other young managers on the rise: Bernie Brillstein and Marty Kummer.

One night in 1964, Weintraub awoke after having a vision of the marquee at Madison Square Garden. It read, “Jerry Weintraub presents Elvis Presley.” He pitched the idea to Presley’s infamous manager, Col. Tom Parker. He declined.

Weintraub kept at it, calling Parker every day for a year. Trying to get rid of him once and for all, the colonel finally challenged the brash young man: Come up with a $1 million cash guarantee in 24 hours, and he could take Elvis on the road. He did — and launched Presley on his national comeback tour. It also set Weintraub on a new career course. After founding Concerts West, he began promoting tours for Sinatra, Bob Dylan, Led Zeppelin, The Beach Boys, and John Denver.

It was another dare that landed Weintraub in the movie business. In 1973, director Robert Altman showed him the script for the future classic Nashville and challenged him to drum up financing. It took two days to raise the cash, but Weintraub had found another career as an independent movie producer. That role was interrupted by a brief foray heading MGM/United Artists for mogul Kirk Kerkorian, but Weintraub realized he preferred being his own boss, producing everything from Al Pacino’s gritty Cruising to National Lampoon’s Vegas Vacation.

His current office on the Warner Bros. lot looks more like a comfortable living room than a workplace, with overstuffed contemporary furniture and walls covered with Variety film reviews, original art, and posters from his movies. Dominating one table is Greatest of All Time, a massive Muhammad Ali biography signed by the fighter that is itself a heavyweight (75 pounds) and worth $10,000. Business news on CNBC scrolls silently on a TV in the background, and centered on a couch across the room is a pillow stitched with a quote from Mark Twain: “If I cannot smoke cigars in heaven, then I shall not go.” It alludes to a passion ignited when Weintraub got his first cigar from Parker, to seal the Elvis concert deal.

Before that Presley tour, another of the acts Weintraub managed was pop singer Jane Morgan, whose hits included “Fascination,” and “The Day the Rains Came.” Their relationship eventually turned from business to personal, though, and the two married. Morgan, whose family long had a home in Kennebunkport, introduced Weintraub to the neighbors — George and Barbara Bush. The ambitious kid from the Bronx and the future 41st president became fast friends and have remained so.

“I’ve known them since forever,” he says of the Bushes. He was a key fundraiser for their son in his 2000 presidential campaign. George W. Bush even joked on the trail about making Weintraub U.S. ambassador to Chad. But Weintraub prefers Hollywood and has scaled back his involvement in politics. “I like my charities. I’d rather put my energies into that,” he says.

Weintraub has been involved with the Jewish outreach organization Chabad, Los Angeles County Museum of Art, Urban League, Elizabeth Glaser Pediatrics AIDS Foundation, and the Jane and Jerry Weintraub Center for Reconstructive Biotechnology, established in 1997 at University of California Los Angeles. University researchers are working with stem cells, genes, and other building blocks, attempting to regenerate facial skin, bone, and tissue to help restore people disfigured by birth defects, cancer, or injury. “I believe you’ve got to give something back,” he says.

Weintraub has clearly put much energy into his new home, also. At least he’s devoting more scrutiny to it than he did his first home in Palm Springs.

During “a three- or four-day poker game,” actor George Hamilton mentioned he saw a house for sale near Canyon Country Club in Palm Springs that he thought was perfect for Weintraub. Not wanting to give up his seat for even a walk-through, Weintraub persuaded Hamilton to go buy the place for him, sight unseen. He sent the paperwork to his lawyer and accountant and promptly forgot about it.

Fast-forward a few years, and Weintraub and Morgan are preparing to head out to Palm Springs for an extended stay. “My wife called me. She said to me, ‘I’m going to go down and rent a house.’”

She called back after she found one she liked. Weintraub said fine and told her to call their accountant and lawyer to make the arrangements. The accountant then asked her, “What is he doing? He’s got a house. He owns a house in Palm Springs.”

“She immediately thought I had a girl stashed there,” Weintraub says. He told Morgan, “Here’s the address. Go there. You can see there’s nobody there.”

That didn’t last, however. He entertained Sinatra, Presley, The Beatles, and many others there during nearly 30 years, finally moving to Morningside when he decided he needed a bigger place. After five years there, he decided to upgrade again.

Now settling into his new Bighorn home, and waiting for the release of what could be the holiday season’s box-office hit, is Weintraub comfortable sitting on top of the world, both at work and at home?