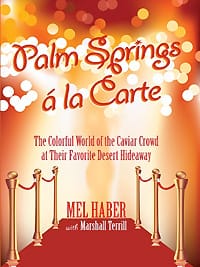 The following is an excerpt from Palm Springs à la Carte by Mel Haber with Marshall Terrill (Barricade Books, Inc.), to be published February 2009.

By opening night the whole town was waiting for me to open my doors. Back then the doyens of Palm Springs society were a small-knit group, but an informed one. I happened to open my place at a time when there was absolutely nothing else going on and I got lucky. Very lucky.

I also made a key hire — someone that could bring the stars to my hotel, bar, and restaurant, which I had renamed "Melvyn’s" on the advice of a friend.

"I can’t name it Melvyn’s," I protested initially. "You’d have to be an egomaniac to name a place after yourself."

"Nobody has ever called you Melvyn," my friend said. He had a point. Nobody had ever called me "Melvyn," including my mother. Everyone simply called me Mel. But the trick was going to be trying to find a guy to be Melvyn — a suave, sophisticated front man who knew how to cater to powerful people. I knew I wasn’t polished enough to pull it off.

As hard as this may be to believe, I’m basically pretty shy. I am not a very sociable person, but that doesn’t preclude me from talking your ears off once I know you. It’s never been my style to walk up to a stranger and strike up a conversation. I’ve always preferred my little space in the back office and pulling the strings. So the trick for me was to find someone who could be Melvyn and be a face that the public would associate with my establishment.

Through a bit of good luck, I managed to lure Hank Van de Boer, who was the longtime maitre d’ of the world famous Racquet Club. The historic hotel resort was founded by actors Charles Farrell and Ralph Bellamy in December 1934, and the opening and closing of the Racquet Club signaled the beginning and the end of each season in Palm Springs. Just about every major Hollywood star traipsed through the doors of the storied club, and now I had the maitre d’ who’d befriended these stars. My timing couldn’t have been better. The club had just been sold and was starting to lose some of its luster. The maitre d’ saw it as the right time to make a move, and luckily for me, he did. He brought plenty of his former clientele to my new place, and for that I was very thankful.

August was drawing to a close, and the site was looking pretty spiffy. We were not completely finished, but I had come to the realization that it would never be and there would always be something to fix. My beach boy chef, Charlie, much to my surprise and delight, had put together a very ambitious yet traditional Old World menu. We decided to open the doors on September 15. I chose to have a quiet opening so that I could iron out the kinks before the season went into full swing. I placed a small ad in the Desert Sun announcing that Melvyn’s was now serving dinner. I had also made up a critique sheet that I was going to use for customer feedback. It was presented at every table with the check, and the waiter was instructed to buy a round of drinks for every table that filled it out.

As I drove to Melvyn’s on opening night, I honestly had no idea what to expect. Was it going to be a bust, or would my efforts be appreciated? I was stunned to find the bar full of people and every table in the dining room was taken. I mean, I couldn’t believe my eyes. To say that I was nervous was a major understatement. The maitre d’ informed me that we were sold out! Who knew? I thought maybe we might get some curiosity seekers, but to have a sold out crowd was beyond my wildest dreams. As I looked around the totally unfamiliar crowd, it appeared as if all the women were beautiful and all the men were handsome and dashing, and everybody was impeccably dressed. I had argued with myself that day as to whether or not to wear a tie, but luckily I made the right decision. Had I guessed wrong, I would have been totally out of place because all the men were wearing jackets and ties.

The maitre d’ pulled me into a corner in the dining room and gave me a run-down of the people in the room: actors Mary Martin and Tony Franciosa; Mousie Powell, wife of Dick Powell, who ran Four Star Studios; Mayor Frank Bogert; 21 Club owners Jerry and Molly Berns; retired studio mogul Darryl Zanuck and his wife; the Florsheims; and several other movers and shakers. As he related their names and who they were, I felt flush. It seemed as if I had the Who’s Who of the country in my establishment.

I circulated throughout the dining room and bar for about two hours, having no idea what to do with myself. As I walked around, several people stopped me to introduce themselves and wish me good luck. It seemed as if an angel had sprinkled some stardust on me because everything seemed to click. I had even hired a piano player for the lounge, and while he was tinkling the ivories in the back, that area began to fill up, too.

I had a college student named Danny Click to thank for a lot of the patrons; Danny and I struck up an unlikely friendship over the course of the summer. He was a young, ambitious kid who parked cars at a well-known restaurant two blocks away. I immediately liked him. Perhaps I sensed in him the same work ethic and hustle that I had possessed at his age. His restaurant was closed over the summer, and he visited almost every day. Danny had assured me that when I opened he would recommend people to stop over and visit Melvyn’s

His word was good as gold, and several people dropped by Melvyn’s on opening night, mentioning that Danny had sent them my way. At about ten o’clock, I walked outside to have a cigarette. Just at that very moment, a scruffy-looking guy dressed in dungarees and a T-shirt and sporting a heavy beard pulled up on a Harley-Davidson motorcycle. He had a very pretty lady on the back of the bike. He’s certainly not the Ingleside Inn type, I thought, becoming a little full of myself. The guy said he had come to see the "new place."

"Please buddy not tonight!" I begged him. "It’s opening night and I don’t want any trouble. Come back another night and I’ll buy you a drink." He smiled at me, gunned the throttle on the motorcycle and drove off. I was pleased at how I handled a delicate situation so adeptly.

About an hour later, Danny showed up and asked, "Mel, have you been getting all the people I’ve been sending over?" I told him I had and thanked him profusely He then asked how I enjoyed meeting Steve McQueen and Ali MacGraw, Hollywood’s new golden couple. Startled and disappointed that I had not, I said they never showed. Danny said he was surprised because they assured him they would come right over to have a nightcap.

He said, "They were on a big, blue Harley-Davidson motorcycle and Steve McQueen was wearing blue jeans and a T-shirt." It turned out that I’d yanked the welcome mat from under the international box-office champion and his glamorous movie star wife. He never came back. Luckily for me, that was the only blunder of that night. However, it was the first of many faux pas that I eventually became famous for.