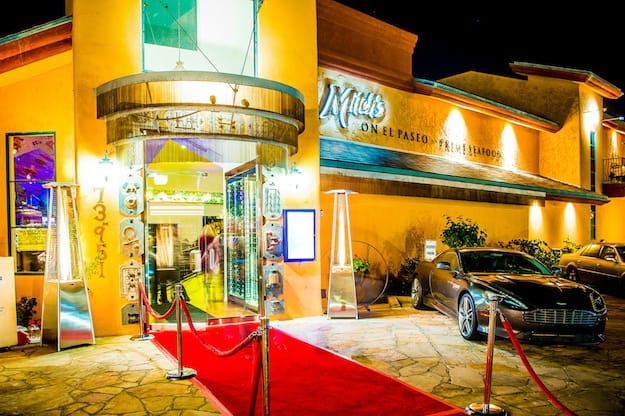 Feeling like steak with a side of salmon sashimi? How about Kobe beef sliders and a rainbow roll?

At Mitch’s on El Paseo — the latest addition to the Palm Desert dining scene — you can satisfy your sushi, steak and seafood cravings under one roof.

“Not everybody wants steak and mashed potatoes. People want variety in their diet,” said Executive Chef James Holder. “If a family comes in and Mom wants sushi, Dad wants steak and the kids want sliders, they can get that variety.”

Mitch’s on El Paseo began serving lunch and dinner at the beginning of February, breathing new life into the former site of Augusta Restaurant with a culinary concept that offers Japanese dishes like creamy lobster tempura and hibachi scallops alongside thick rib eyes and pork chops.

Owner and General Manager Mitch Epstein is excited to spend six to seven nights a week at his new restaurant, which he called “a lifelong dream.”

Epstein entered the restaurant business 31 years ago as a barback, earning an assistant manager position at the age of 22 and eventually working his way to vice president of Food and Beverage at Walter’s Golf in Las Vegas. Epstein moved to the desert in 2002 to become a managing partner at Pacifica Seafood Restaurant.

His partner, Holder, is also an industry veteran. The Japanese-born chef established the sushi scene in San Diego with restaurants like Café Japengo, which he helped open in 1990. Over the years, Holder sliced fish as executive chef at a number of Japanese restaurants, including Ajiya in Del Mar and Nozomi in Carlsbad.

At Mitch’s on El Paseo, Holder is working with Japanese purveyors who specialize in sashimi-grade fish.

“I want to bring the quality,” Holder said. “I’m not using imitation crab. I use snow crab meat, quality-grade tuna, and yellowtail and scallops from Japan.”

The lunch and dinner restaurant specializes in variety, not just between surf and turf options but also in plate sizes. Holder said he’s noticed the popularity of tapas-style dishes and designed an extensive small plate menu.

Fruit is also infused throughout the menu, most noticeably in dishes such as the Ahi mango poke tacos, dover sole with white grape and lemon sauce and beef tenderloin filet with shiitake grape demi glaze.

Meals are complemented by a sake menu, which features unfiltered, sparkling and flavored varieties of the Japanese rice wine.

Fans of the former Augusta Restaurant will recognize many familiar faces, as Epstein rehired Augusta’s entire staff in addition to hiring new employees.

“We have a great cross-section of old and new (staff),” Epstein said. “One team, one dream.”

Holder hopes to eventually introduce a sushi bar and theme nights, but for now, both Holder and Epstein are focused on pleasing their guests.