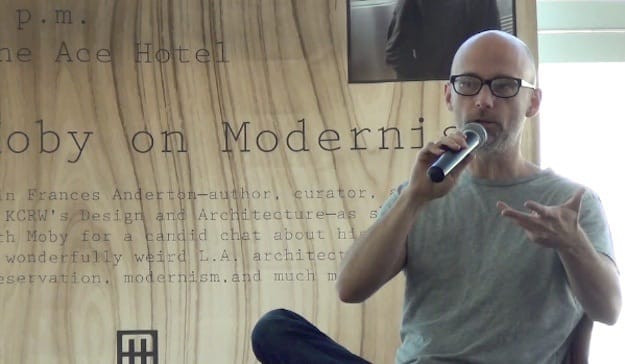 While walking up Park Avenue in New York City, Moby would look at such modernist icons as the Seagram’s building and be in awe of architect Philip Johnson’s travertine walls.

The same would be true when he looked at the Lever House.

“They were both like my temples," Moby said. “Ornamentation was the devil.”

The Grammy nominated musician’s immersion into modernism has only grown from there. Even after he moved to Los Angeles, Moby (whose real name is Richard Melville Hall) has become as well known for his dance music as the blog he pens on L.A. architecture.

His recent visit to Palm Springs during Modernism Week only solidified his popularity between the two genres. His observations about architecture are both funny and strikingly on target. Part of that comes from recognizing early on that modernism projects pristine and perfection, but often falls short on both counts.

“I think the epiphany I had was when I saw pictures of the Eames house, and I expected it to be clean and austere, and it’s filled with crap,” Moby said. “These are the patron saints of modernism and their house is a disaster.”

In moving to L.A., Moby has used his blog to point out the gems sometimes lost amongst the crap.

“If you are a committed modernist in L.A and you want pristine and perfect buildings, you will blow your brains out because 99 percent of the buildings are disastrous,” he said. “But it’s been the challenge of finding beauty.”

VIDEO: View Moby's takes on Palm Springs, his music and architecture, and that empty room in his L.A. house.