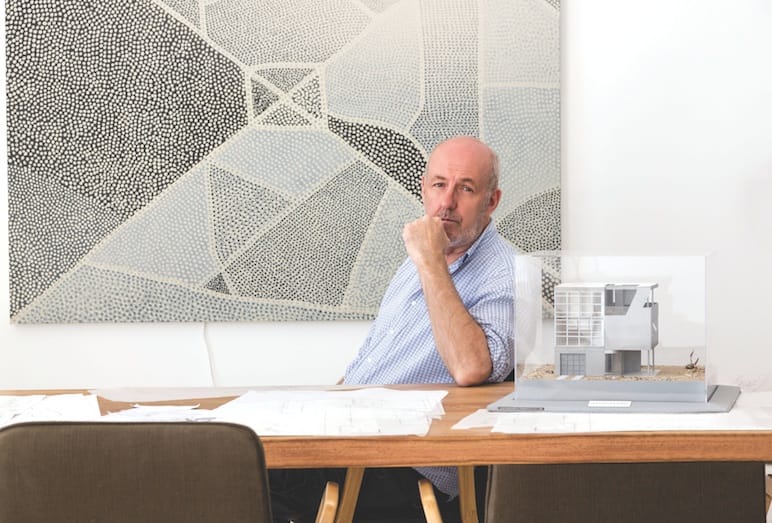 David Webb in his Palm Springs home with the model he created of Aluminaire House, designed in 1931 by architects Albert Frey and A. Lawrence Kocher.
Photo by Mark Davidson

David Webb has lived in many places and earned his living doing many different things. For now, he’s riding a groove that has captured the imagination of Palm Springs’ passionate community of architecture enthusiasts.

A landscape painter who moved to the desert from Los Angeles in 2011 — drawn by the great concentration of midcentury design — Webb set out to depict some of his favorite modern houses on canvas. “I tried painting them first, but it wasn’t working,” he says from his William Krisel–designed villa (and studio) in the Canyon View Estates neighborhood of South Palm Springs. “The paintings were awful. I thought I should try doing them in 3-D.”

It was hardly a new idea for Webb, who almost 20 years earlier built a scaled model of Frank Lloyd Wright’s Fallingwater residence in southwestern Pennsylvania — one of two houses created for Edgar Kaufmann Sr., the other being Richard Neutra’s iconic Desert House in Palm Springs.

“The first two houses I saw when I visited Palm Springs in 2008 were the Edris House by E. Stewart Williams and the [Dr. Franz Alexander House by] Walter S. White,” he says, adding that the encounter inspired him to construct a miniature of the Edris House. That model landed — with three others — in An Eloquent Modernist: E. Stewart Williams, Architect, the maiden exhibition at the Palm Springs Art Museum Architecture and Design Center, Edwards Harris Pavilion (which Williams designed in 1961). “I love architecture. I’m affected by it.”

Webb met J.R. Roberts, owner of the Edris House, on a home tour and showed him pictures of the model on his smartphone. “He thought it was a picture of the house,” Webb recalls. “I said it’s the model, and he said he needed to see it.”

Their fledgling friendship gave Webb access to examine details of the house photographs often miss. “There are no pictures of the north side,” he says, pointing out that photographers typically capture the south side, where the pool deck sets into the landscape.

Roberts introduced Webb to Sidney Williams, the museum’s curator of architecture and design (and the architect’s daughter-in-law). She later connected Webb with the owners of the Williams-designed Frank Sinatra Twin Palms estate, who were looking for a model maker.

When the Architecture and Design Center opened An Eloquent Modernist in late 2014, Webb felt gratified by the community’s response to his work — and affirmative words from The Architectural Review. Webb crafts the models from cardboard, plastic, sheet styrene, and scanned and scaled images of detail such as decorative blocks and rock walls. He cuts every piece by hand. In addition to architectural drawings and photographs, he uses Google Earth to reference the landscape, which figures into models as realistically as the structures. “They’re like little paintings,” he says. “Only in 3-D.”

Webb has since built a model of Albert Frey and A. Lawrence Kocher’s 1931 three-story Aluminaire House, which is being relocated to Palm Springs from New York and plans to create models of other houses of the period, including Frey House II and the Rudolph Schindler House.

“I want to create a collection of the great, small, sustainable small-footprint houses here,” he says, asserting that he’d like to exhibit the models outside the desert.

In the big picture, he wants to enlighten the uninitiated about sustainable modernist design.