Editor's Note: Architecture and design specialist Brad Dunning, curator of the exhibition, The Modern Chair, at the Palm Springs Art Museum Architecture and Design Center, will trace the evolution from the first cantilevered chair by Mart Stam, and then onward to designs of current times in a special lecture at 6:30 p.m. March 15 at the Annenberg Theater inside the Palm Springs Art Museum.

Sometimes, a chair is more than something to sit on. It might be a work of art or a precious heirloom with great sentimental value. To a collector, it could be a trophy object, while others may value its familiar and reliable comfort. The go-to chair in my living room, a reproduction of Eero Saarinen’s Womb Chair and Ottoman, appeals in all these ways — a curvaceous ergonomic design in a molded fiberglass frame, padded and upholstered in fabric, and set on chrome legs to accommodate all the ways I sit in it: usually with my feet up on the ottoman and sometimes sideways across the arms of the chair. Its 1946 design responds to architect and fellow furniture designer Florence Knoll’s request for “a chair that was like a basket full of pillows,” something she could “really curl up in.” 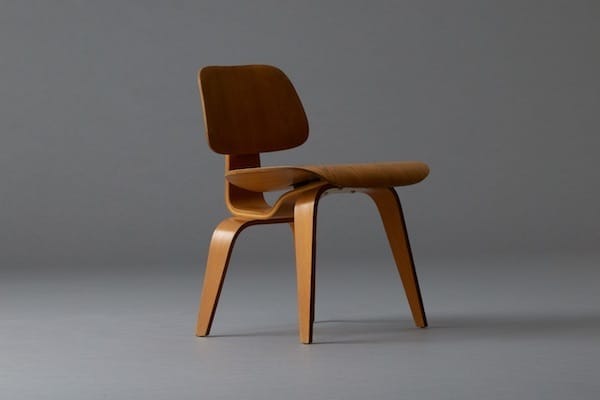 The Womb Chair was the pinnacle of design, beautiful in form and function and embodying modernism’s spirit of experimentation and innovation. Seventy-five years later, it’s a midcentury classic, with Knoll reproductions and a variety of knockoffs still in high demand.

Although it’s not included in The Modern Chair, the season-long exhibition at the Palm Springs Art Museum Architecture and Design Center, Saarinen is represented by his iconic Tulip Chair. The show, drawn from museum’s collection as well as from other public and private collections, continues through April 3, 2022, and features 60 eye-popping and comfy-looking specimens spanning more than 100 years.

“During the last century,” says curator Brad Dunning, “new industrial materials and technological and stylistic advances pushed chair design forward faster than at any previous time. The exhibition follows the development and evolution of the modern chair.”

It begins with two early examples — a simple and unadorned bent wood Thonet B-9 armchair created in 1904 and used in the designs of architect Le Corbusier as well as the first cantilevered chair created by Mart Stam — and continues through the “fertile and innovative” midcentury years and concludes with contemporary designs. 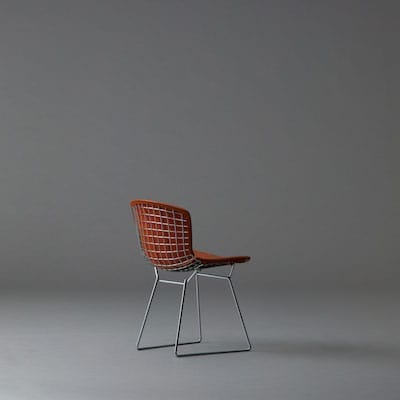 Visitors can trace the history of the cantilever chair from Stam to the diminutive Rudolph M. Schindler example commissioned by Herman Sachs for the Manola Court Apartments in Silver Lake, and find many familiar designs, such as the Charles and Ray Eames’ molded plywood Side Chair (Model DCW), which Time magazine named as the best design of the 20th century in 1999. “I’m showing a rare early version,” Dunning says of the low-slung icon and Herman Miller best seller. “It launched the Eames’ career.”

Innovative entries reflect technological advances and aim to solve problems. Saarinen’s Space Age and single-legged Tulip Chair, for example, resolved what the Finnish-American designer described as the “ugly, confusing, unrestful world” underneath tables and chairs — the so-called, “slum of legs,” while the Danish designer Verner Panton’s S-shaped Panton Chair, created in the 1960s, became the world’s first molded plastic chair designed in one piece without legs. 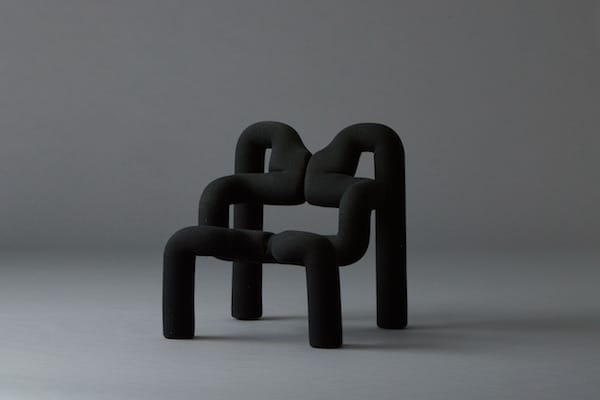 Panton has a second work in the exhibition: his bright red Heart Cone Chair. He designed it in 1958, based on his striking Cone Chair. The heart-shaped form of its seat shell, also molded as a single piece, inspired the chair’s name. “Panton always loved the big English wingback chairs that envelope you,” Dunning says. “He was trying to do his own version of it. It was out in the 1960s and really has that pop sensibility.”

Vitra, which has produced Panton’s designs since the 1960s, reissued the Heart Cone Chair in the 1990s; the newer version replaces the cross-shaped foot with a round plate, lowers the heart “wings,” and adds a leather option.

Terje Ekström offers one of the most unusual forms in the playful and ergonomic Ekstrem armchair, created in 1972, commercialized in the 1980s, and now experiencing a revival. Its spider-like design was an instant hit for its odd look and imaginative versatility: You can sit on it like a regular chair, sideways, or even backward. “It’s fun to imagine how many ways the chair can be used,” Dunning says.

One of Dunning’s favorites in the exhibition is the Module 400 chair by French designer Roger Tallon. It has a cast aluminum pedestal base and egg crate latex foam seat and back. “It looks so industrial,” he says. “Tallon was fascinated with the foam that’s in packing crates. He [designed the chair] for a friend who had a disco in Paris. The whole floor was made of interchangeable tiles the same dimensions as the base of the chairs, as well as matching barstools and standing ashtrays.” 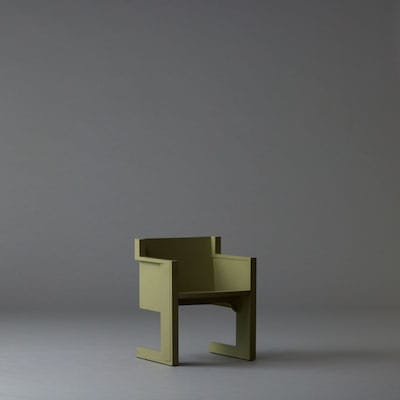 Materiality plays an important role in the exhibition, which includes two chairs constructed with paper, including Frank Gehry’s Beaver Chair and Ottoman, designed in 1980 and produced by Vitra in 1987.

“Gehry was doing architecture way before furniture and always made his models with corrugated cardboard,” Dunning explains. “There would always be tons of scraps around his studio. One night he started gluing them all together, took an X-Acto knife and hacked at them, and ended up with the Easy Edges [Cardboard Furniture series]. We’ve all seen the squiggly [Wiggle] Chair; this armchair is quite rare.” (It’s from an edition of 100 pieces.)

More delicate, at least in appearance, is the Honey-Pop Armchair by Tokujin Yoshioka, who formed wafer-thin sheets of paper into a honeycomb design to create a strong structure. It arrives folded flat, opens like an accordion, and takes the impression of the first rear end to sit on it.

Other chairs in the exhibition, like Danish designer Hans Wegner’s Round Chair, became popular in part because of the people who used them. This piece gained worldwide publicity in September 1960, when Richard Nixon and John F. Kennedy sat for the first nationally televised presidential debate. “This may be one of the most beautiful chairs in the museum collection,” Dunning says. “Talk about delicacy. Wegner is the master of the wooden chair. This one is made of 11 different parts of wood, and he somehow joins them so they’re seamless and elegant.” The chair actually debuted in 1949 at the annual exhibition of the Cabinetmakers’ Guild in Copenhagen.

A few chairs might ring familiar to visitors, including Eames’ classic 670 and 671 Lounge and Ottoman — “The design for this chair has never gone out of production and remains a bellwether of success and status,” Dunning says — as well as Harry Bertoia’s Welded Wire Side Chair based on steel grid wire forms and Marcel Breuer’s reductive Wassily Chair.

Others, like Cini Boeri’s glass Ghost Chair, will surprise. “Boeri wanted a chair that just disappeared,” Dunning explains. “Of course, it doesn’t, but it’s less than a half-inch thick of poured sheet glass.” 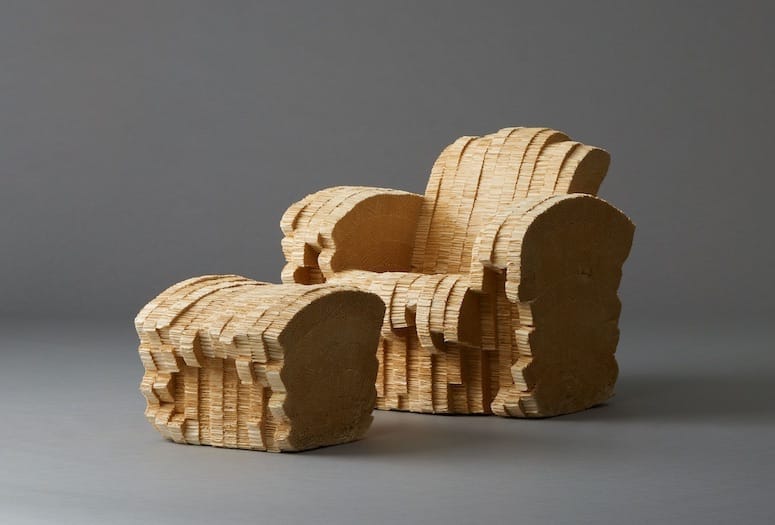 Visitors to the show might be tempted to pick up Italian designer Gio Ponti’s Superleggera chair. Its name translates to “superlightweight,” as it weighs only 3.7 pounds but can support the weight on a 350-pound person. Advertisements for the chair, designed in 1949 and continually produced by Cassina since 1957, featured a young boy lifting it with one finger. (Security will stop anybody who attempts it.)

In the center of the exhibition space, Dunning has organized a section to focus on California design that includes William Haines’ Custom Armchair (circa 1950), as well as a wicker example by Miller Lee Fong, who, Dunning says, “found a way to make rattan hip. It fit the sophisticated yet casual California lifestyle of the 1960s. The lines are both organic and sculptural.”

The Modern Chair makes no attempt to be comprehensive; rather, it’s a survey exhibition that showcases the evolution of design over more than a century. “So much of design is cyclical and transitory,” Dunning says, “but a lot of the chairs that we’re showing are in the design zeitgeist now. There’s interest in them again.”

While visitors cannot sit in the chairs on display, he adds, each demonstrates how design reflects and expresses the way we live and have lived. psmuseum.org

• READ NEXT: The Chair That Eames Built.