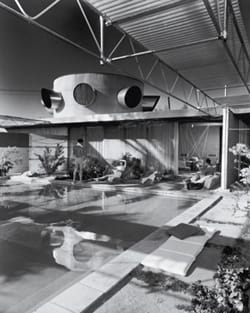 Palm Springs struck it lucky in the middle of the 20th century. “It was a fluke to have such a concentration of good architects in such a small place — who were then completely overlooked for 40 years,” says architecture critic and author Alan Hess.

Now, the area’s reputation as a hotbed of midcentury modernism attracts architecture and design experts, as well as mainstream modernism buffs. Now in its seventh year, Modernism Week (Feb. 16-25) pulls in high-caliber professionals.

Frances Anderton, host of KCRW radio’s popular “DnA” (Design and Architecture) program, also will be at the symposium, along with art furniture designer Wendell Castle. Four days earlier, Jade Chang, the West Coast editor of Metropolis magazine, will speak.
In December, Dwell magazine held a “Dwell on Design” conference in Palm Springs, attracting nearly 300 architecture and design aficionados, half of whom came from outside California.

“Palm Springs needs national attention, because no other place in the country has the concentration of fine buildings that it does,” said Michela O’Connor Abrams, president and publisher of Dwell. The conference brought famed architects from Palm Springs’ midcentury heyday such as Donald Wexler, William Krisel, Hugh Kaptur, and Michael Black, as well as photographer Julius Shulman, to interact with architects making an impact here today. Abrams said one purpose of the conference was for participants to “have an oral history experience” with older architects and to showcase projects underway by the younger generation.

Dwell was created “to champion an intelligent, thoughtful, and modern sensibility that stimulates our audience to envision — and realize — life at home in the modern world.” Abrams decided to hold her magazine’s conference in Palm Springs after studying the area’s architectural riches during a visit that led her to an epiphany.

“Although our collection of modern structures is not the largest in the world, it is the most creative and most stellar,” says Palm Springs Style author Robert Imber, who has run Palm Springs Modern Tours since 2001. “We are privileged to have the greatest concentration of fine midcentury architecture anywhere. It’s a veritable living museum of forward-thinking architecture.”

In the ’40s, ’50s, and ’60s, the architectural conversation switched from “How are we going to build workers’ housing?” to “How are we going to enjoy our weekend?” said Alastair Gordon, a contributing editor to House & Garden. “The modern weekend home represented a new kind of leisure and experimentation.”

The Coachella Valley’s abundant sunlight, views of mountains and desert, and outstanding weather led to homes with deep overhangs, sunscreens, and generous use of glass, said architectural historian Peter Moruzzi, who founded the Palm Springs Modern Committee to preserve noteworthy buildings. From the Salton Sea to Desert Hot Springs, architects felt free to create architecture that fit the desert.

Not all modernism here fits a rigid vocabulary of right angles, flat roofs, and glass walls. There are nods to International Style, Moderne, Tiki, and Polynesia, opulent Brazilian formalism, Spanish and Indian architecture, and many experiments with organic architecture that hugs hillsides, and incorporates boulders and desert terrain into the buildings themselves.

Hess, who wrote the bible on Palm Springs modern architecture, Palm Springs Weekend, said that Palm Springs has “a neat microcosm of midcentury architecture from across the nation.” The area was blessed with money and daring clients, which led to architectural experimentation.

Until about a decade ago, Hess noted, Palm Springs’ architecture was ignored. “There were all of these remarkably talented architects here, and I didn’t hear about it at UCLA’s architecture school two hours away.”

Hess made a strong case that the mass-produced Alexander homes designed by Krisel and Dan Saxon Palmer for the Alexander Co. represent one of the most significant chapters in modern architecture worldwide. The houses used the same floor plan, but with eight different elevations and rooflines, giving the illusion of custom-designed units. Efficient construction was an Alexander mantra, to the point of saving on landfill costs by burying construction debris that created landscape berms. “Palmer and Krisel were able to take the modern ideal of a well-designed, affordable modern house and make it a reality,” Hess said. “Walter Gropius, Buckminster Fuller, and Frank Lloyd Wright with his Usonian houses all attempted to do the same, but very few of their creations were ever built.

“Name architects had tried to solve the problem, and they failed,” Hess said. “Palmer and Krisel and others
succeeded here.”

The Young and the Restless
Today, young architects are interpreting modernism in the valley, some fiercely innovative and some with literal homages to the ’50s and ’60s. A few — such as Phillip K. Smith III, founder of The Art Office in Indio, and Lance O’Donnell, principal of o2 Architecture in Palm Springs — grew up here.

At the Dwell conference, a handful of architects previewed a staggering number of modern-themed projects slated for construction. As Smith said, “It is exciting to see how the city will be transforming before our very eyes.”

“Palm Springs is anticipating a huge amount of development,” said Leo Marmol, principal of Marmol Radziner and Associates in Los Angeles. His firm has worked in the city since 1993, when it began renovating the Richard Neutra-designed Kaufmann house. “As architects, we’re trained to love change. I’m excited, and I’m worried about what it will do to downtown Palm Springs.”

Building luxury custom houses comes with a certain amount of guilt, Marmol said, because of wasteful building practices that gobble up resources. A 2,000-square-foot home typically produces 8,000 pounds of waste that ends up in a landfill, he said. Prefabricated houses that use steel and structural insulated panels to minimize waste are his response. His 2005 expansive, modular, green, prefab house in Desert Hot Springs has received much national attention.

Jennifer Siegal, a Los Angeles architect and founder of The Office of Mobile Design, focuses on prefabricated and portable structures that make sense ecologically. She is building three homes in Desert Hot Springs next to the iconic 1947 hotel designed by John Lautner.

Jay M. Reynolds, whose mother and stepfather live in Palm Desert, said his OMJR firm in Los Angeles is designing several projects in the Palm Springs area. He calls them, as well as those by other young architects, “new century modernism.” It differs from older architecture by tighter zoning constraints and energy standards. Many are higher-density projects that use more prefab technology.

Mark Kirkhart, founding partner of DesignARC, a firm with offices in Santa Barbara and Los Angeles, has completed the modernist-inspired projects 48@Arenas, 48@Baristo, and The Biltmore Colony and has 500 additional units in various stages of development in the valley. He said that residents here desire not only shelter, but also a physical and emotional link to the city.

Johanna Grawunder, who has studios in Milan, Italy, and San Francisco, is building a house in Desert Hot Springs in a style she calls ”accidentalism” that owes much to African-style homes with an interior courtyard. The only exterior openings are the front door and garage door. It is new desert architecture that’s not about air conditioning or beautiful tans, she said, but more about a dwelling’s relationship with the sky.

Krisel offered final words for those following in the footsteps of his generation’s trendsetters. Midcentury modern is not a style, but a language, he told them. “Architects today should develop their own language and should be ‘of the time’,” he said. “Trying to imitate midcentury modern today is as bad as us doing colonial houses. Being influenced is different from being a copycat. Don’t imitate the shapes and forms.”

The Time: Modern
Highlights in the development of modernism in the Coachella Valley.

Get More Modern. Only Online.