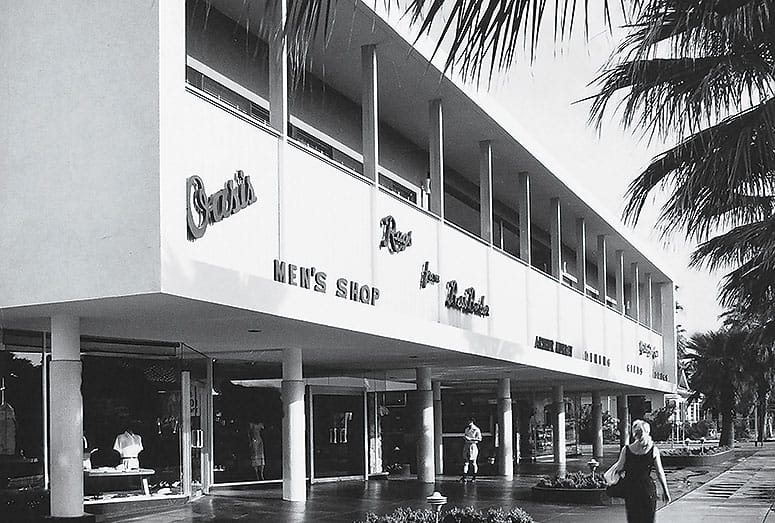 Thirty-seven-year-old E. Stewart Williams moved to Palm Springs in 1946 to practice architecture with his father, Harry, and brother, Roger. The Great Depression and World War II had delayed his entry into the field, but it afforded him other opportunities that would enhance his 50-year career in architecture.

Born in 1909 in Dayton, Ohio, Williams earned his bachelor’s degree from Cornell University and his master’s from the University of Pennsylvania. Neither institution offered much if any exposure to modern architecture and the recent developments in Europe at that time. Thus, following a four-year stint teaching a variety of courses on art history and art-making at Bard College, Stewart traveled to Europe in 1938 to see contemporary work by J.J.P. Oud, Walter Gropius, Le Corbusier, Mies van der Rohe, and Erich Mendelsohn and documented his impressions in an illustrated journal.

Returning to the United States, Williams found work with industrial designer Raymond Loewy’s New York office designing store interiors. He subsequently joined the Navy and served for three years at Mare Island designing efficient dry-dock repair installations. The knowledge he gained there, combined with his artistic training, teaching skills, and European travels, readied him for his launch into the creative practice of architecture upon arriving in Palm Springs.

The family’s firm, known to locals as “Williams cubed,” was located in a second-story space at La Plaza, the shopping center that Harry had designed in the mid-1930s. E. Stewart Williams’ first large commission (at 38) was designing a home for Frank Sinatra, an auspicious beginning to his practice. Employing such materials as glass, wood, and stone, the house — boasting panoramic views of the desert mountains — was crafted to harmonize with the surrounding landscape and seamlessly blend indoors and out. Several other residential commissions followed, such as the Edris House, the Koerner House, and the Sutter House.

In addition to the firm’s projects, Williams led a group of architects in forming the Palm Springs Planning Collaborative to reimagine the central core of the town. The group undertook numerous studies from 1964 until 1967, and Stewart made presentations at city council meetings, where he demonstrated his skill at articulating the vision of the collaborative. This experience confirmed his concern for urban planning, sprawl, and protecting the environment, and led him to present lectures in several cities in Southern California on these topics.

The firm produced designs for numerous civic, institutional, commercial, and residential projects, including schools, colleges, banks, and houses, with each structure demonstrating Williams’ approach to architecture. He felt that buildings should naturally inhabit their site and be in concert with their environment. His largest and most complex projects, the Palm Springs Art Museum and Crafton Hills College in Yucaipa, demonstrate both this conviction and his commitment to creating inviting and people-friendly spaces. His designs, revealing a dedication to modernism, contain elegant details, warm materials, and a close connection between interior and exterior. His ability to communicate ideas clearly, combined with his easy charm, made his passion for architecture infectious.

Santa Fe Federal Savings and Loan (1961), one of Williams’ favorite buildings, opened in November 2014 as the Palm Springs Art Museum Architecture and Design Center, Edwards Harris Pavilion, with a retrospective of his work, An Eloquent Modernist: E. Stewart Williams, Architect, furthering his recognition as integral to the modernist architectural legacy of Palm Springs.

This is the first of a series adapted from The Desert Modernists: The Architects Who Envisioned Midcentury Modern Palm Springs. The book, published by Modernism Week in partnership with Palm Springs Life, will be released in February 2015 to correspond with the 10th anniversary of the 10-day event, Feb. 12-22, 2015. For more information, visit www.modernismweek.com. The author of this chapter, Sidney Williams, is curator of architecture and design at the Palm Springs Art Museum and former chair of the Palm Springs Historic Site Preservation Board. She is the daughter-in-law of E. Stewart Williams.