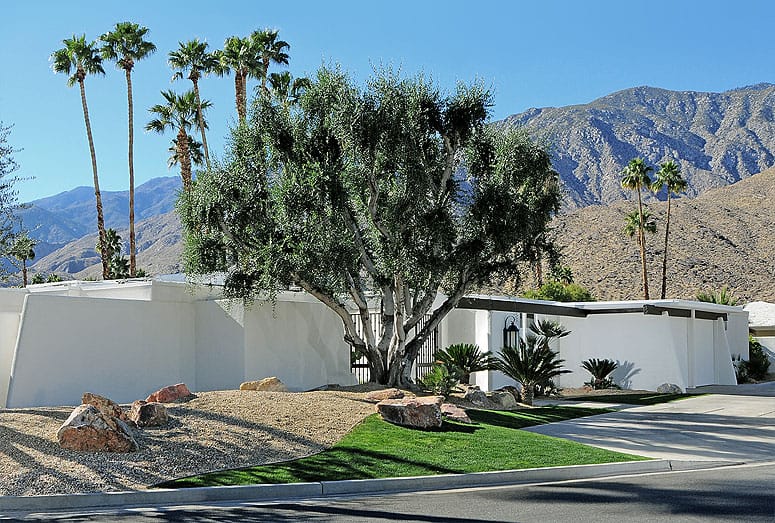 In 2010, when interior designer Sean Gaston and his partner in life and business, contractor Jim Jewell, first viewed what would become their next Palm Springs home, it was more a case of falling in love with potential than love at first sight.

The modest, three-bedroom house had already been on the market for two years, and, as Gaston puts it, the décor consisted of a peculiar mix of mauves, baby blues, and pink: pink formica counters, pink formica walls, and pink berber carpet throughout — even in the kitchen. All of this was made worse by the addition of brass accents, several odd modifications to the original floorplan, and a dizzying array of mirrored walls and ceilings. But unlike other prospective buyers, Gaston and Jewell did not turn on their heels in the opposite direction.

“We knew this was no ordinary home,” says Gaston, who along with Jewell, own and operate Bee Renovated, a San Francisco–based construction and design firm specializing in restoring vintage houses. “Since we restore homes for a living, we have a feel for how they work. We knew this one was architecturally significant because it had some really cool lines and an indoor atrium, and even though it was blocked off by the addition of a pantry, the arcade was impressive.”

The couple asked their agent who the architect was, but she didn’t know. Then they asked the family who owned the home, and they didn’t know either. “So we took a chance and bought it,” Gaston says, “because we could see that there was something beneath all the randomness.”

While clearing out the added-on pantry for removal, the couple’s presumptions were validated. They discovered, tucked into a far corner behind a chest freezer, amid myriad rolls of old wallpaper, the home’s original blueprints.

“We laid them out, and said, ‘Oh my God! Here’s our template,’” says Gaston. “We already knew we were going to bring the house back to whatever we could. But the plans told us exactly what to do.” Not only did the blueprints reveal the architect’s original intentions back in 1967 when the house was built, but they also answered that burning question: the name of the architect.

If the name Stan Alan Sackley rings no bells for you, you’re not alone. But to a growing number of aficionados of Palm Springs’ modernist architecture, Sackley — the home’s architect — is gaining status. Yet even among his cult following, little is known about him, at least not in the way we know Albert Frey, E. Stewart Williams, and William Krisel. What we do know is that Sackley studied architecture at USC, graduated in 1961, and ran the architectural firm Sackley & Associates out of Palm Desert. He was also an avid car collector, amassing before his death in 2001 a number of Jaguars, a 1979 Ferrari 308 GTS, and a 1937 Chrysler Coupe. Sackley’s bikini-clad third wife, Carol Sackley, was featured on a 1965 cover of Palm Springs Life lounging in the swimming pool of a home he had designed.

How a personality as bold as Sackley’s ever fell off the radar is a mystery. But based on his designs — consisting of hard lines; flat, alternating roof levels; and open floor plans with a strong connection to the outdoors — one suspects Rudolf M. Schindler, the godfather of modern architecture, likely played more than a passing influence on the young architect.

Even without the floor plans, Gaston and Jewell’s 3,400-square-foot house contained several clues to Sackley’s original intent. For one, when the former owners added the pantry off the kitchen, they also moved the kitchen island by 90 degrees. “When we pulled the carpeting up in the kitchen,” says Gaston, “we could see exactly the line where the island used to be. So we moved it back, which really opened up the area.” It was clear, too, that the kitchen cabinets were original, so Gaston and Jewell simply resurfaced them and added vintage hardware.

Other indicators of the home’s original design were not so obvious. That’s where the blueprints came in. They showed that the entrance to the master suite had been moved from its original inconspicuous location to what should have been an eye-catching feature wall and the end of the arcade. “The plans told us where the original door had been,” says Gaston. “So we cut open the dry wall, and guess what? The doorframe was still there. All we had to do was put the door back.”

Curiously enough, inside the master suite the previous owners had pretty much left the two separate bathrooms intact. New shower tiles and faucets were all Gaston and Jewell added to the smaller bathroom. “We kept the cabinetry and the hardware because they were original and cool,” says Gaston, who does plan to stray somewhat from the home’s blueprints in the larger bathroom. “We’re going to gut it and put in a sliding glass door that will open to a garden and outdoor shower.”

Indeed, the home’s verdant outdoor space, facing the San Jacinto Mountains and situated off the Indian Canyons Golf Course, was one of the main features that attracted Gaston and Jewell to the home. Here, the couple often spends time entertaining guests poolside, which conveniently contains an outdoor kitchen.

When the couple took possession of the house, the exterior, which is now painted a crisp white befitting the clean lines of the architecture, was a yellowy-peachy color. Unfortunately, the exterior required more than just a paint job to restore it to its original look. The previous owners had removed Sackley’s signature 30-degree angles at the end of the repeating dividing walls that provide an element of surprise against the otherwise horizontal and vertical lines. Naturally, Gaston and Jewell restored Sackley’s angles, and for good measure added an additional one of their own.

“We also recovered some of the former outdoor living space from the interior,” Gaston says. “The former owners had enclosed this, so if you were on the inside, you would have had to walk through two sliders before reaching the pool area. It was a weird add-on that served no function. So, we subtracted the space to take it back to its original state — something most homeowners don’t do — and now it flows much better and makes more sense.”

With the architecture restored to its near-original footprint, the couple then set about the business of decorating. They started by painting all the walls white and laying down white polished porcelain floors. “As you can see, I love white,” says Gaston. “It makes the art and furniture the real heroes of the house.”

And all those mirrors? Why, they painted those white, too. “You simply can’t get anything smoother than glass,” explains Gaston. “You just can’t hammer a nail in there. But why would you want to?” The mirrored built-in shelves remain, however, producing an element of shine in the living room.

At first blush, one is tempted to label the home’s décor as Hollywood Regency. Indeed, it does contain aspects of the style first popularized in the 1930s: baroque lamps, chinoiserie, an eclectic yet harmonious mix and match of patterns, textures, and finishes. Even the single accent wall in the family room (which used to be the bedroom off the kitchen) is painted pink, not the baby powder pink of the home’s former incarnation, but a more saturated, decidedly more sophisticated pink inspired by the exterior color of Sunnylands, the former Rancho Mirage home of the Annenbergs, now considered “the Camp David of the West Coast” and the epitome of Hollywood Regency style.

“The pink isn’t an exact match; we probably went through 20 shades of pink before finding this one!” Gaston says. “But you can’t really label the whole as Regency, not with contemporary art for the 2000s and showcase pieces from the ’70s. When you stick to a strict theme, it becomes very formulaic, whereas if you’re not labeling, you have the freedom to go with what you like.” And that they have done, notwithstanding a nod to Stan Alan Stackley.