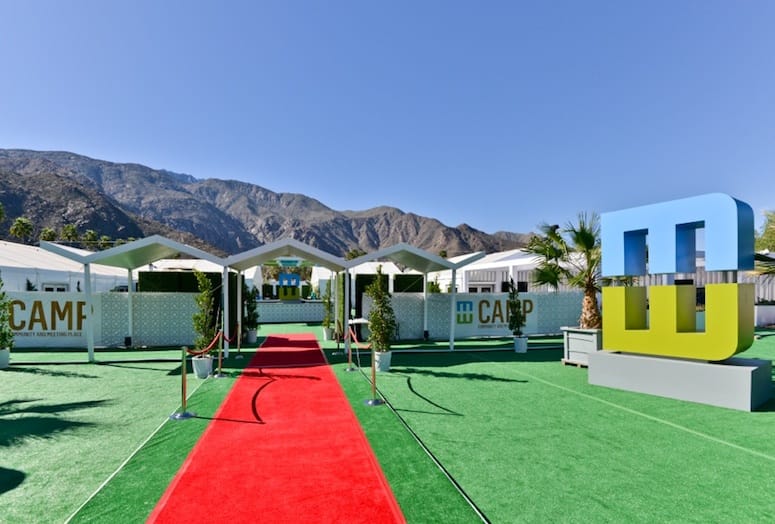 CAMP made its debut during Modernism Week 2015 on North Palm Canyon Drive in Palm Springs, giving attendees a place to meet-and-greet during the 11-day event.
Photo by David A. Lee

Nearly 60,000 people attended Modernism Week 2015, according to event officials, or an increase of more than 30 percent over 2014.

Last month's 11-day festival from Feb. 12 – 22, reached 59,500 people and generated an estimated $22 million in revenue for area hotels, shops, restaurants, and other local businesses across the Coachella Valley, officials say.

“We are delighted by the enthusiastic interest in Modernism Week and the positive effect that our festival has on Palm Springs, our neighborhoods, and the entire valley,” says J. Chris Mobley, Modernism Week board chairman. “It is a pleasure to have the support of the City of Palm Springs and the larger community, our sponsors, partners, volunteers, and attendees from all over the world as we work together to celebrate Modernism.”

The 10th-year celebration garnered an unprecedented amount of media attention with more than 2 billion impressions worldwide. In addition to coverage in national publications such as The Wall Street Journal, The New York Times, and the Robb Report, Modernism Week was also featured in high-end travel and lifestyle journals including Architectural Digest, Conde Nast Traveler, and Haute Living, and received international attention from Departures Middle East, Ralph Lauren Magazine, The Telegraph, and other publications in Canada, Europe and Australia.

CAMP (Community and Meeting Place) created a first-ever meet-and-greet place for Modernism Week. Ferguson, the exclusive Kitchen & Bath Sponsor of Modernism Week, produced a series of panel discussions at CAMP titled “Renovation Insights,” and also sponsored a Design Industry Party at the Modernism Week Show House 2015: The Christopher Kennedy Compound, which experienced a 20 percent increase in attendance over its inaugural 2014 event with 3,000 visitors during the festival. The Modernism Show & Sale at the Palm Springs Convention Center also broke attendance records with more than 8,350 visitors during Presidents’ Day weekend, an increase of more than 10 percent over last year.

A highlight of the week was ‘Poolside Gossip: an Evening with the Ladies from the Iconic Photograph’ on Feb. 19. Though the program was intended to be a conversation with Nelda Linsk and her decades-long friend, Helen Kaptur, reuniting the ladies who appear sitting poolside at the ‘Desert House’ in the 1970 Slim Aarons photo, Kaptur passed away earlier that week after a brief illness. Helen was the wife of acclaimed architect Hugh M. Kaptur.

The audience listened intently as Linsk reminisced with Modernism Week board member Gary Johns about owning and living in the Richard Neutra-designed Desert House, and sharing photographs and anecdotes about her life in Palm Springs when the legendary photo was taken. Internationally acclaimed modernist architect Neutra was also recognized during Modernism Week with a special dedication ceremony on the Palm Springs Walk of Stars.

Twenty-three neighborhood organizations, including 11 participating in Modernism Week for the first time in 2015, offered home tours. Tour revenue increased 111 percent over last year, generating more than $463,000, for the neighborhoods to fund improvements such as landscaping, signage, restoration, and charitable contributions. Modernism Week also conducted a special Premier Double Decker Architectural Bus Tour for area high school and college students, and provided opportunities for students to attend lectures and participate in other events.

Partner events co-produced during Modernism Week proved to be effective fundraising, bringing in more than $900,000 to fortify the participating neighborhoods, other preservation groups including Palm Springs Modern Committee, Palm Springs Preservation Foundation, and the Palm Springs Historical Society, as well as Palm Springs Art Museum, Mizell Senior Center, the local chapter of American Society of Interior Designers, and other collaborators including the Modernism Week Show House by Christopher Kennedy and the Stan Sackley tour and event produced by Thomboy Properties. A portion of proceeds from private events and tours go directly to the non-profit organizations that partner with Modernism Week.