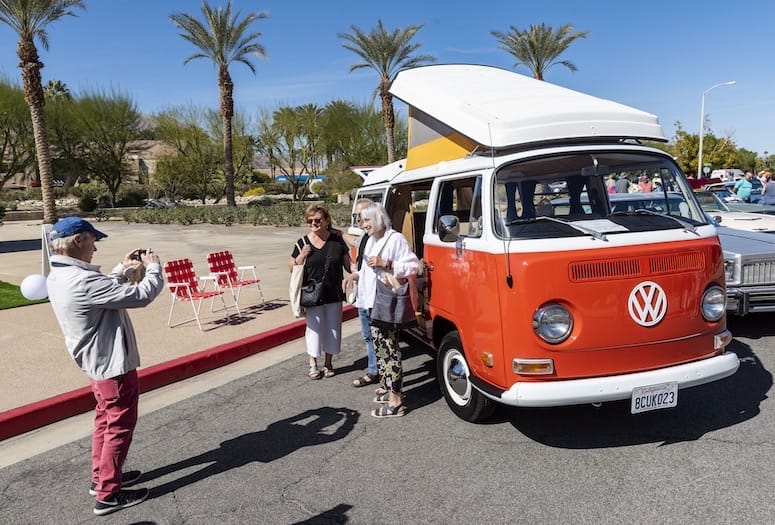 Modernism Week fans pose in front of a vintage Volkswagen Van during the event's 15th run in Palm Springs.
PHOTOGRAPHS BY DAVID A. LEE

Attendance was estimated at 162,000 with more than 375 events during the festival. Celebrating midcentury modern design, architecture, art, and culture in Palm Springs, the 11-day festival generated an estimated economic impact of $61 million for area hotels, shops, restaurants, and other local businesses from Palm Springs to Indian Wells and beyond. Worldwide media coverage generated more than 3.7 billion media impressions, a new record for Modernism Week.

In addition, CAMP, Modernism Week’s ‘Community and Meeting Place’ and headquarters for tours and events, experienced more than 42,000 visitors throughout the festival. 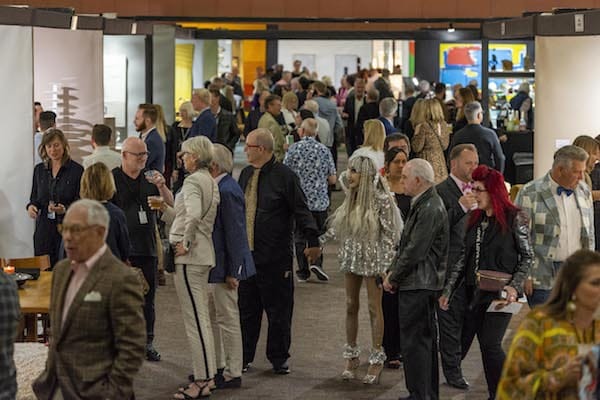 More than 15,000 attendees came to the Modernism Show and Sale, or a 10 percent increase over last year.

In addition to many California visitors, the event was popular with attendees from Washington, Illinois, Minnesota, and New York. Attendees came from all across the globe with 25 countries represented including Canada, Australia, Germany, United Kingdom, Spain, France and more.

The popular Palm Springs Modernism Show & Sale, which celebrated its 20th year in Palm Springs, also saw increased numbers. More than 15,675 participants attended the sale at the Palm Springs Convention Center, a new record for the event. Attendees were eager to view and purchase furniture, decorative and fine arts representing all design movements of the 20th century from more than 90 premier national and international dealers and the 46 dealers in the Modern Design Expo.

“The 2020 Palm Springs Modernism Show & Sale was a milestone for us,” said Rosemary Krieger, president of Dolphin Promotions. “It was our 20th year offering this popular show and it was by far the most well-attended of the Palm Springs shows in our company’s history.” 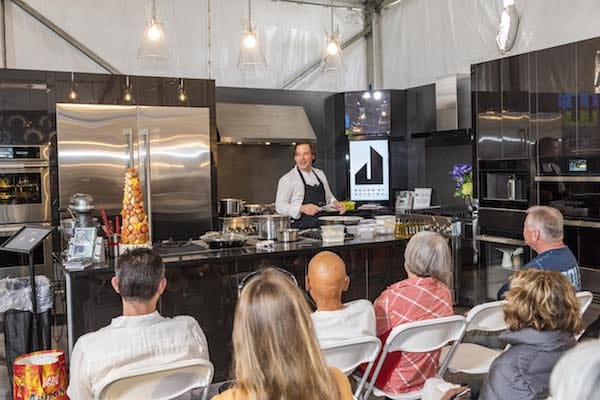 Modernism Week’s ‘Community and Meeting Place’ (CAMP) drew more than 42,000 visitors for activities like this cooking demonstration by Stephen Wambach of SMW Inspired.

Modernism Week celebrates and fosters appreciation of midcentury architecture and design, as well as contemporary thinking in these fields, by encouraging education, preservation and sustainable modern living as represented in Palm Springs and the surrounding Coachella Valley. 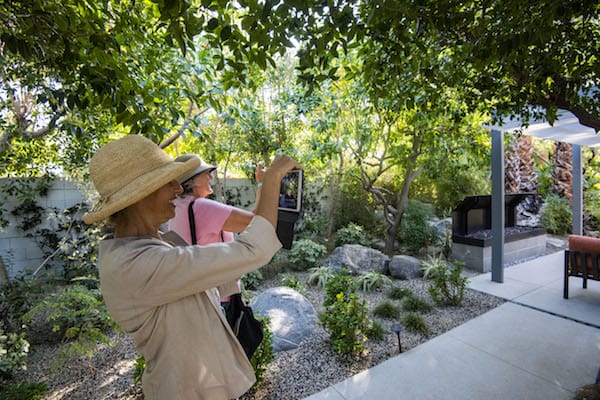 The garden tour remains a popular choice at Modernism Week.

Highlighting this dedication to education, this year more than 100 lectures and films spotlighting famed architects, landscape designers, historians, design experts and authors were presented to attendees, including the sold-out Modernism Week Keynote presentation by architect Daniel Libeskind, two presentations on Hollywood film design, two engaging panel discussions on design, three presentations that were of interest photography enthusiasts, a talk by architect/historian Alan Hess on the little-known but surprising modernist frontier of Orange County, and an in-depth overview of the Albert Frey-designed Aluminaire House. The topic of Landscape and Outdoor Living featured presentations, book signings, and the always-popular Modern Garden Tour.

Modernism Week once again offered attendees the opportunity to participate in home tours, parties, and architectural excursions in Palm Springs and outside of the immediate area including Rancho Mirage, Palm Desert, Cathedral City, Desert Hot Springs and Indian Wells.