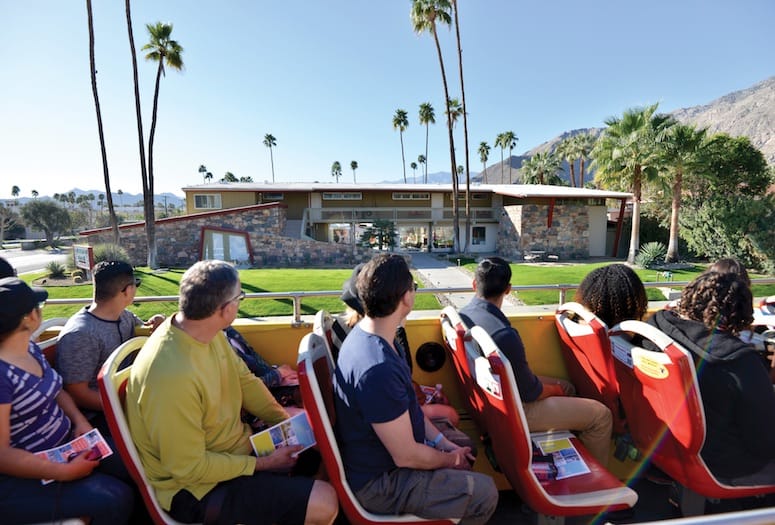 One of the stops during Modernism Week's bus tour of Palm Springs is the Del Marcos Hotel designed by architect William F. Cody.
PHOTOGRAPH BY DAVID A. LEE

What started in 2006 as a three-day event — originally called “Modernism Weekend” — has transformed into the international attraction that is known and loved as Modernism Week. “The first [iteration] had less than 1,000 attendees and just a handful of events,” says Lisa Vossler Smith, the design festival’s executive director. “The goal was to raise awareness for the incredible archive of modernism in Palm Springs and to help reinforce preservation.”

Now in its 13th year, Modernism Week is expected to draw 100,000 guests. “We have this wonderful combination of visitors who compel us to keep programming fresh, while continuing main tours for newcomers,” Vossler Smith explains.

Through its growth, the event’s mission has remained the same. In 2009, Modernism Week became a nonprofit; its revenue supports the community and preservation efforts. “We aren’t just looking at trends,” Vossler Smith says. “We are examining what role midcentury modernism played in design and how it’s informing current designers; we’re looking at the future as well.”

ADAPTIVE REUSE
A process of reusing an old building for a purpose other than what was intended.

BUTTERFLY ROOF
A roof with high points at the outside edges and a low point in the middle.

CANTILEVER
A structural element projecting beyond its support to create an overhang.

CLERESTORY WINDOW
A short window located at the top of a wall.

EXTENDED PLAT ROOF
A roof with joists that extend beyond the exterior wall (either cantilevered or supported on beams) to create a shaded area below.

FOLDED-PLATE ROOF
A roof with rafters placed at repetitive angles to create ridges and valleys.

SCREEN BLOCK
A decorative block used to create a barrier through which light and air can pass.

SWISS MISS
A home style characterized by a steeply pitched gable that extends to the foundation.