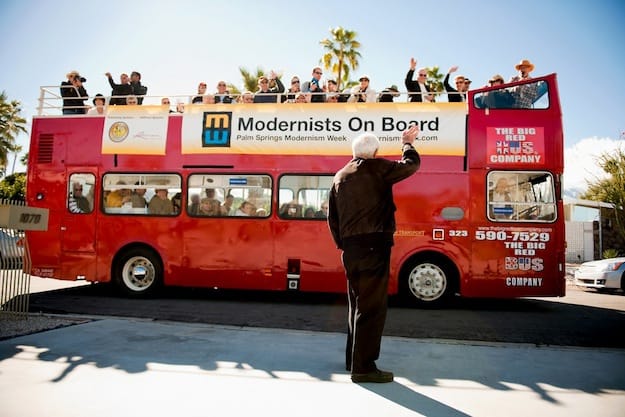 The 11-day event, which ran Feb. 14-24, was launched in 2006 as the only event in the country to celebrate mid-century modern design, architecture and culture, has attracted larger crowds each year.

Modernism Week has helped fuel a robust national interest in the preservation and appreciation of modernism. Palm Springs Modernism Week supports local and state preservation organizations in their efforts to preserve modernist architecture throughout the state of California. It also awards annual scholarships to high school students who have chosen career paths in architecture and design.

“We are absolutely thrilled about this year’s attendance, and it has become quite clear that Modernism Week is one of the hottest tickets in town each season,” says Jacques Caussin, board chairman of Modernism Week.

This year’s edition featured a diverse range of events, including the Modernism Show at the Palm Springs Convention Center. The PreFab Showcase was expanded this year to include several prefab structures that combined world-class architecture with green, eco-friendly, and sustainable construction. A new component of the Showcase was the Modern Living Expo, which featured exhibitors displaying smart living ideas.

Also new this year was the Pan Am Exhibition, which offered a colorful array of memorabilia, uniforms, and nostalgic items from the now-defunct, iconic airline. Temple Isaiah offered tours of E. Stewart Williams’ 1952 hidden gem – their original sanctuary – plus a striking art display of the work of renowned Israeli artist Yaacov Agam, and a rare collection of photos and memorabilia.

One of Modernism Week’s most popular events continues to be the Double Decker Architectural Bus Tours, led by a knowledgeable guide and offering a fascinating overview of Palm Springs’ world-famous mid-century modern architecture, some of the town’s notable architects, as well as an entertaining perspective of Palm Springs’ Hollywood-era history and the many celebrities who made it their personal playground.