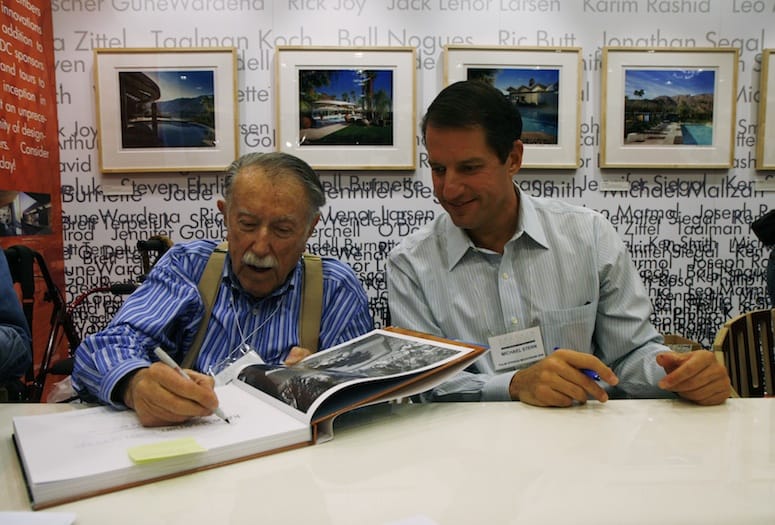 While you are sipping a cocktail at a poolside party or enjoying a film, a home tour, or a lecture during the 2016 Modernism Week in February, you should know that this event’s stature as a glamorous international cultural event grew out of surprisingly humble beginnings.

Like many great ideas that have become successful, Modernism Week began as a small passion project by a few creative thinkers. The personal residence of famed designer Arthur Elrod (before he moved to his renowned John Lautner Southridge home) was featured on an Interior Design Home Tour during the 2011 Modernism Week.

Produced by national show producers Dolphin Promotions, the Modernism Show & Sale, was held over the President’s Day weekend in February with the ADC Symposium following the next weekend.

The Modernism Show began in 2001 at the Palm Springs Convention Center while the ADC Symposium had been an annual event at the Annenberg Theater since 1999. As these two events took place on consecutive weekends, the small group of preservationists and modernism architecture aficionados behind Modernism Week at the time wanted to offer programming during the week that was bookended by these two established events.

The group called itself the Modernism Week Committee and was a loosely formed volunteer organization of about a dozen like-minded modernists and representatives from several nonprofits: the Palm Springs Art Museum, Palm Springs Modern Committee (ModCom), Palm Springs Preservation Foundation (PSPF), the Palm Springs Historical Society, as well as other community and for-profit businesses. Attendees coming to the Modernism Week Preview at the Palm Springs Convention Center in 2009.

With seed money from some of these entities, Modernism Week was born. The group began planning home tours, double decker bus tours, parties at architecturally significant homes, film screenings and other events to fill in the week, fulfilling the name — Modernism Week.

The first year of Modernism Week in 2006 featured a handful of events, but the public’s enthusiasm for such a concept was evident immediately. All the events were well attended and Modernism Week’s immediate success enabled the group to repay the seed money the first year. Moby speaks during Modernism Week in 2013.

In 2007, we curated about 20 Modernism Week events. As Year 2 and Year 3 grew exponentially, the Modernism Committee realized they had a tiger by the tail. They found that the public’s appetite for all things “modern” was insatiable. Each year the group added more and more events to round out the week’s schedule, while the robust ticket sales continued and the excitement grew.

The Committee recognized they had to become a legitimate entity, so board of directors was elected and a 501(c)3 nonprofit status was filed to officially make Modernism Week a legal entity.

When the group morphed from a “committee” to a legal nonprofit in 2008, it marked a major milestone. The first Modernism Week board was comprised of Caussin, Williams, Eugenis, Weiner, Kopelk, Barbara Marshall, and myself.

The executive board and the other board members were all hard working volunteers. It soon became clear that the executive director, Nickie McLaughlin, who handled the day-to-day operations, should be a paid position. It was also decided that Modernism Week needed a full-time publicist, also a paid position. I stepped off the board to handle the public relations for Modernism Week for the first seven years. The late Jack Reynolds (left) with board member, Beverly Morse, and chairman, Jacques Caussin, at a 2011 Volunteer Party held at the Riviera Palm Springs.

• They come from across the globe, including Europe, Asia, Australia, South America and beyond.

• The economic impact to the city’s tourism sector is significant —  nearly $22 million dollars, according to Modernism Week.