Mojave Desert: Advice on How to Navigate the Sandy Wilderness 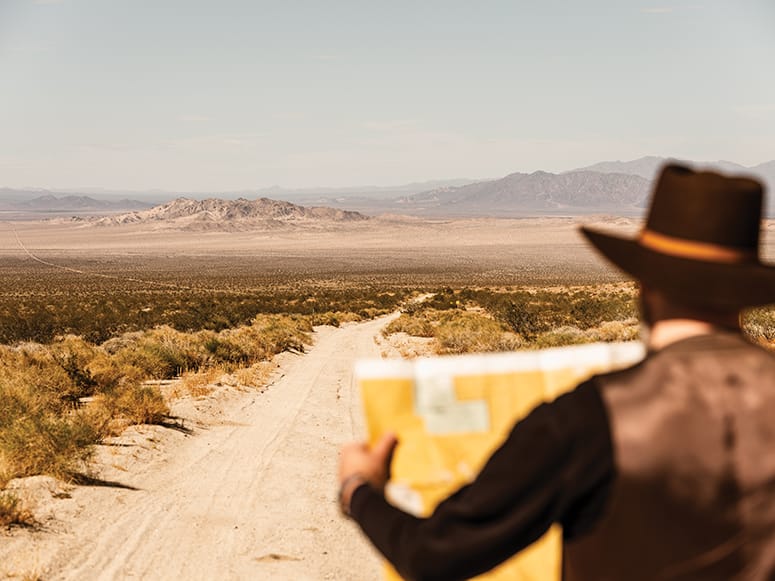 It wasn’t supposed to go like this; it wasn’t the plan at all. The plan was to get out of town for a few days and explore the desert. Fill up the Instagram feed with abandoned gas stations and cracked asphalt snaking through forests of Joshua trees. Beers at a roadhouse, impulse buys at a boutique on Highway 62, a night under the stars from the safety of an Airbnb hot tub or campfire ring.

And now it’s a late summer day, well over 100 degrees, not a stylish swimming pool or outdoor cocktail bar in sight. You’ve been sitting in the car, the doors flung open, the burning air wrapped around you, suffocating and dense and so very dry. An empty cardboard coffee cup rests in the drink holder, and a crumpled plastic water bottle sits under the seat. It is midday, which means that in seven or eight hours, the ball of orange fire in the sky will finally sink behind the mountains, and the temperature will drop to 95 degrees or so, if you’re lucky.

Something gave out: the gas in the tank, the tires, the transmission, or maybe the rear axle, snapped in two by a boulder partially buried in the sand on this godforsaken dirt road you never meant to be on, never consciously chose to take at all. The voice of the navigation robot was as sure as ever: “Turn right at the gas station,” even though little remained of that particular gas station, and the road itself was forlorn and untroubled by recent tire tracks. You were headed for something — an art exhibit on the open desert, a historic mining site, the location of a television show you remember, a sweeping view of the national monument — but it doesn’t matter now. Unless you write it down, nobody will ever know why you wound up dead on a rough sandy track that could charitably be called a jeep trail.

Even if they find your remains, which might not happen for years, your personal story will not be told. Maybe there will be a local news article somewhere: “Human Remains Found Hours From Nearest Settlement.” You had so much life left to live, so many things you never got around to doing. And now you’re a sun-baked skeleton picked over by vultures and ants, one bony hand stretched out ahead. Maybe at the end, you thought you were almost home.

• READ NEXT: Music and Magic in the Mojave. 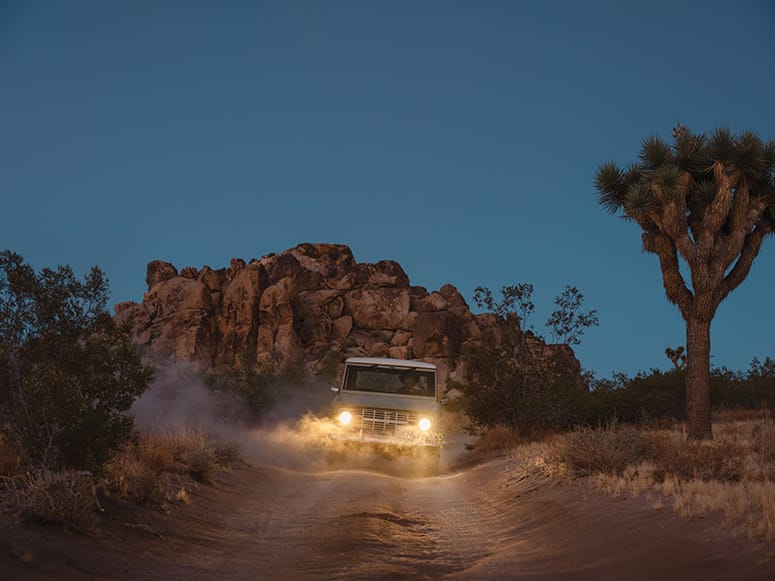 Most Mojave visitors stay close to Joshua Tree National Park, where rangers and other visitors offer a measure of safety and comfort. But the attractive boulders present a world of hazards. Amateur rock climbers often fall, break bones, and have to wait for rescuers to arrive. Sometimes help shows up too late. 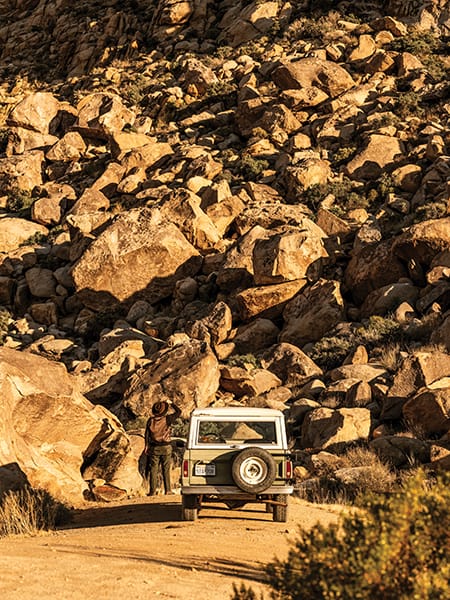 The Mojave Desert covers much of Southern California and a bit of the neighboring states: Southern Nevada, the Arizona strip, and the bottom corner of Utah. Before this dried-out expanse of burnt-chocolate mountains, blinding playas, and lonely roads became beautiful in the eyes of the beautiful people, it was something to endure on the way to Las Vegas or the Colorado River, or something to survive on the way to whatever was luring you to the West Coast.

There were always desert rats, the antisocial sort who looked at this punishing landscape and felt at home, as well as the romantics, the people who required a weird backdrop to fit their personal movie. But there were never enough of them to fill hotel rooms and Airbnbs. And so the desert was mostly ignored, unless the steady jobs of the Los Angeles Basin were in commuting distance. Unless a corporation had gotten ahold of some government desert land to use for giant solar towers or windmills or a gold mine or some insane scheme to pump the groundwater from the Mojave to Orange County, the interior of the desert consists of unfenced national parks and national monuments, with no-unauthorized-entry military bases and massive green squares of barely touched wilderness filling the map between the Sierra Nevada and Las Vegas and the urban sprawl of Southern California.

Luckily for those who love this wild desert for what it is, a few visionaries over the past 100 years were able to set aside much of this landscape as an immense desert preserve that rivals anything on Earth in size; only the vast Namibian desert preserve on the southwestern edge of the African continent is larger than the 10 million protected acres of the Great Mojave Wilderness, from the tip of Death Valley National Park to Mount San Gorgonio within the new Sand to Snow National Monument.

Most Mojave Desert visitors stay close to Joshua Tree National Park, and especially to its well-traveled sightseeing spots and tourist traps. If you get a flat tire or a dead battery on the Park Boulevard loop between Twentynine Palms and the unincorporated village of Joshua Tree, a friendly ranger will come by before long. And if your Airbnb turns out to be a lightly redecorated meth shack without a working toilet, you can drive to a motel. But get lost on a remote trail or break down off the highway, and you’ll have a very different experience. Maybe you’ll survive, and maybe you’ll enter our rich history of lost tourists. We add a few names to this roster every summer. If the names are known, anyway.

• READ NEXT: In words and images, Kim Stringfellow reveals the lore and lure of the Mojave. 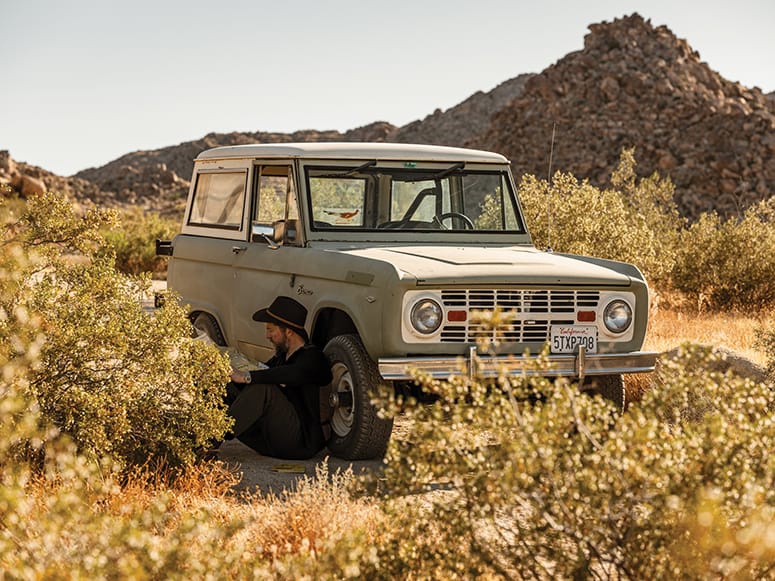 When stuck somewhere in the heat of a Mojave summer, it’s safer to stay with your vehicle — on the shady side, of course — than to walk into the inferno looking for help. Eventually, a passerby will see you and (hopefully) stop to lend a hand. 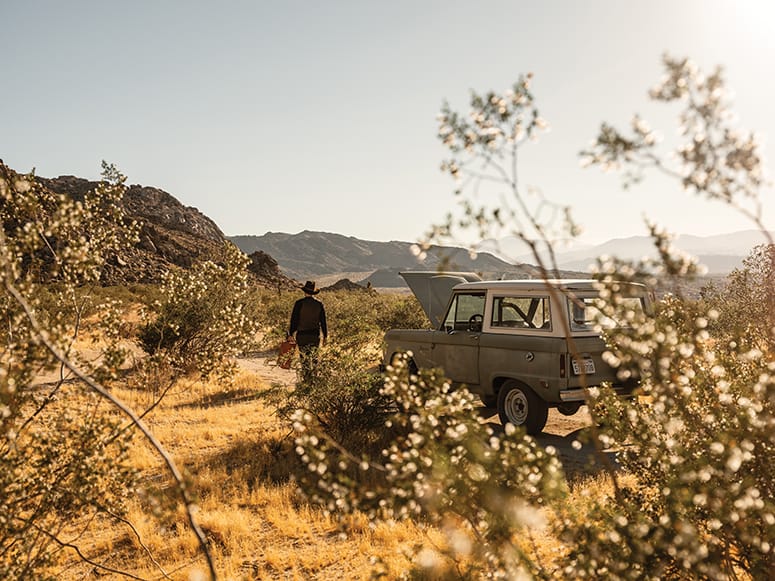 You might not be ready to join  this list of people swallowed by the Mojave Desert. You might have other  plans — plans that require coming home intact. The good news is that the gospel of desert survival is short, simple, and easy to remember.

Water, and lots of it. You could dig up some sandy alkaline water from the damp edge of a wash, if you’re lucky enough to be there just after a good soaking. Which is unlikely. Or you can build a “solar still” if you happen to drive around with science-project supplies. You could even try to bash open a barrel cactus, but it’s best to leave that to the bighorn sheep, which don’t get sick from that bitter mush. Why not carry plenty of water and not worry about your Eagle Scout technique? When you’re at the grocery store buying whisky and marshmallows for the campfire, fill up the extra space in the shopping cart with cheap plastic jugs of water. Ten dollars worth of gallon-jug water in the trunk can significantly raise the odds of surviving your Mojave ordeal. (Please recycle the plastic jugs once you’re rescued.)

Save that phone battery. Of course you’ve got a car charger for your phone. Before a day hike or backcountry adventure, make sure it has a full charge, and don’t run it down looking at Instagram or whatever. You’re already in the scenic desert. While there are plenty of remote spots without any cell coverage, in much of the Mojave you can get a cell signal, even if you’ve got to walk up a hill first.

Avoid walking in the heat of the day. If it’s already hot when you start your day hike, it’s going to be unbearable on the way back — especially at Amboy Crater in Mojave Trails National Monument, where four day-hikers have perished since 2017. In the summer heat, dawn and dusk are the only times you want to be headed out for an easy walk.

“A few visionaries over the past 100 years were able to set aside much of this landscape as an immense desert preserve that rivals anything on Earth in size.” 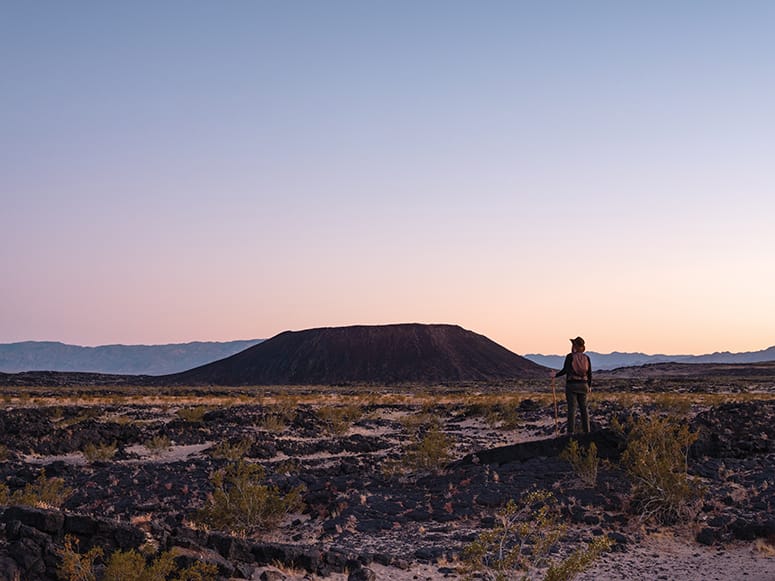 Since 2017, four day-hikers have perished at Amboy Crater, a landmark volcanic cinder cone.

A broken-down car is your friend. Your vehicle can be seen from a distance. It’s bigger than you are, the glass and mirrors reflect light, and it’s probably already on some kind of road or trail. Stay on the shady side when the sun’s beating down.

Call for help while you can. When an Orange County couple got lost on a midday walk around Amboy Crater in June 2018, Kathie Barber managed to call 911. But Barber and her partner, Gen Miake, died before the sheriff’s helicopter found them.

Watch where you step and where you reach. The best way to avoid a rattlesnake bite is to avoid stepping on a rattlesnake. And to dodge black widow bites and scorpion stings, don’t put your hands where you can’t see. Leave those old Army Surplus snakebite kits at home; doctors say slicing up your flesh with a razor blade does far more harm than good. Just get to any desert hospital, where anti-venom is available.

Flash floods kill. The most reliable way to die in the desert is to drive your car into floodwaters blocking a roadway. This is as deadly in downtown Palm Springs as the Mojave Desert Wilderness. And no matter how comfortable that shady wash looks on a hot summer day in monsoon season, remember that churning torrents of mud, boulders, dead cows, and water can come rolling down from dozens of miles away. 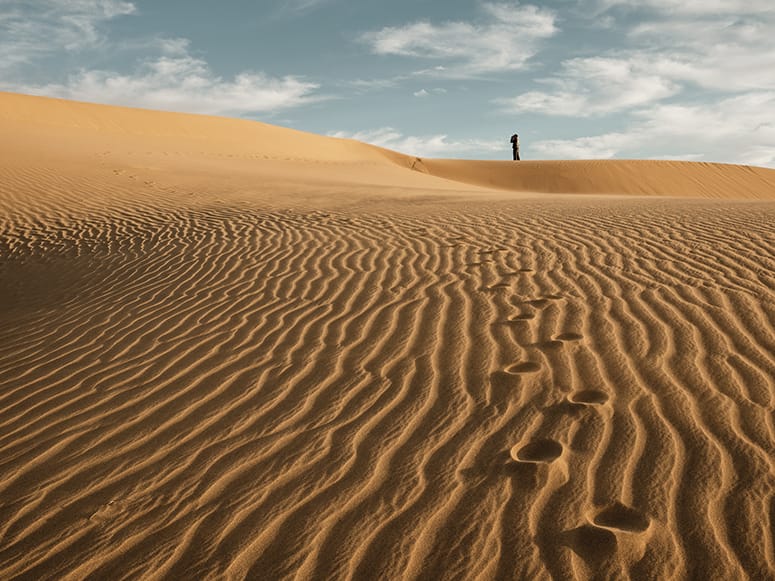 Check your car. Make sure your tires are evenly inflated and have enough tread for a road trip. Is your spare tire functional? Enough coolant in the reservoir? How about engine oil? And remember to fill the gas tank. Service stations are few and far between.

Tell someone where you’re going. Venturing into the desert wilds? Text the people who care whether you live or die. And alert the desk at your hotel, your Airbnb host, or the rangers at your campground. Sign the trail registers. Leave a note on the dashboard if you’re heading away from your vehicle. The more clues for rescuers, the more likely they’ll find you while you’re still breathing.

Don’t go rock climbing alone. Crawling up boulders has become a popular pastime, despite the well-established effects of gravity: routine deaths and critical injuries from falls. In May 2018, New Zealand visitor Claire Nelson fell 15 feet from a boulder and spent four terrifying days on the ground with a shattered hip before rescuers went looking for her. If you must try rock climbing, do so with a buddy.

But choose your buddy carefully. In the sweltering summer of 2017, Rachel Nguyen went to Joshua Tree to celebrate her birthday with ex-boyfriend Joseph Orbeso. Only 2 miles from the Maze Loop parking lot where their vehicle was found, Orbeso shot his ex through the skull with his .40-caliber semi-automatic pistol, which he carried loaded on a short day hike in a national park. Then, he turned the gun on himself.