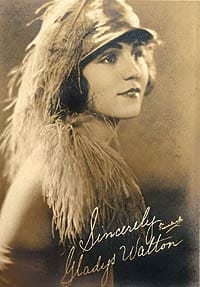 John Herbel-Walton has a lifetime of rich memories about his late mother, but in one of his earliest, he recalls going on a long vacation with his family to Carmel. He remembers how his older brother used him to distract employees of a small shop so his brother could steal candy and sundries — or, at least attempt to steal, as it turned out. And, John Herbel-Walton remembers how his mother baked cookies and took them, he’d later learn, across the rugged San Francisco Bay to her longtime boyfriend Al Capone, who was living out his last days of sanity (and a 10-year prison term) on Alcatraz.

Walton, who lives in the Movie Colony in Palm Springs, knows it all sounds incredible, but once he starts talking about his mother — silent film siren Gladys Walton — it becomes clear that while myth and history are sometimes intertwined, Ms. Walton’s life was nothing if not eventful.

“My mother was a flapper girl in every sense,” Walton says. “She lived life as a movie star, but also as Capone’s girlfriend and lieutenant.” If Walton’s dreams come true — and if persistence pays, they might — Hollywood will eventually tell the true story of his mother and her dual life of starlet and Mob go-to girl.

While written history has provided little in the way of substantiation to Ms. Walton’s organized crime associations (for romance or business), her film history is carved in celluloid with star turns in nearly 40 films between 1920 and 1928, including her most famous role as Rose O’Grady in Second Hand Rose. It was on the set of The Untameable, Walton’s 1923 film about a woman with a split personality (half vamp, half innocent girl, naturally), that Mr. Walton says his mother first came into the thrall of Al Capone.

“Al was popular with all the actors and actresses,” Walton says, “because he was bootlegging liquor and throwing great parties and providing gambling.”

At the same time, Capone was racking up a list of crimes a bit more nefarious than those of the average Prohibition-era gangster. Murder and mayhem were his calling card. He wasn’t called Scarface for his sunny disposition. But to Gladys Walton, her son says, Capone was a gentleman. “He’s always portrayed as having a foul mouth, but my mother said he never cursed in front of her,” he says. He also adds that Capone lived by a strict code, which meant he never intentionally hurt civilians. “He was considered to be something of a modern-day Robin Hood,” Walton says, noting that Capone opened the first soup kitchens in Chicago during the Depression and also instructed local businesses to give away clothes and food at his expense.

But it was Capone’s penchant for partying that sealed his relationship with Walton — a relationship that found its greatest depth at what is now the ultra-private Two Bunch Palms resort in Desert Hot Springs.

Nestled on a berm that rises above the craggy desert floor, Two Bunch Palms was to be both Capone’s West Coast capital and an exclusive destination for the Hollywood elite. Replete with a brothel, gambling hall, and a cozy stone cottage, it became Walton’s de facto home, her son says, as she managed Capone’s lucrative West Coast bootlegging business and hosted wild, alcohol-fueled parties for the likes of Charlie Chaplin, Marian Davies, Rudolph Valentino, and others. Legend has it that on one particular night, a gunfight erupted inside Capone’s cottage while Gladys Walton slept beside her gangster boyfriend. Capone reportedly shot and killed the would-be assassin and left a large mirror blemished with a bullet hole.

The mirror still hangs in Capone’s cottage and draws considerable interest. “Everyone seems to know the legend,” says Jill Maya, Two Bunch Palms’ marketing and sales director. The cottage is usually booked. In fact, she says, as the story becomes more well known, the cottage has become a hot story among visitors, television producers, and history buffs. “The Travel Channel was just here,” she says and there is talk of a Capone Vacation package, which might include a visible reminder of the resort’s past as a tour guide (Capone’s great-grandson?).

“Al gave my mother many expensive gifts during this time,” John Herbel-Walton says. They include a ring that Walton’s brother now has, but it is the more tangible gift Walton suggests that opens eyes and, he hopes, avenues of interest. “I don’t want to besmirch my mother,” he says, but he intimates that the identity of his birth father fell somewhat into question. “I favor my mother’s looks,” he says, “and we’re not going to do any tests or any of that, but no one can deny that my grandson looks like Capone.”

That line between myth and history gets hazy until you set eyes on 22-year-old Josh Herbel. There’s Capone’s distinctive chin, a familiar darkened cast to the eyes, and the coal black hair. Put him into a gangster suit and a fedora and, well, you have yourself a dead ringer — enough so that a photo of Josh now hangs above the registration desk at Two Bunch Palms. “Eerie, isn’t it?” Maya asks. In a word, yes.

But that’s only the beginning, Walton hopes, noting that his mother was aboard the Oneida the night William Randolph Hearst reportedly shot and killed Thomas Ince, that many years later the Manson Family frequented his mother’s horse ranch in suburban Los Angeles, and that some secrets about his family remain, and he’d rather not delve into them. At Two Bunch Palms, where an underground tunnel runs from Capone’s old cottage to the gambling hall, and where the exclusive nature of the resort persists, it seems those secrets are safe.