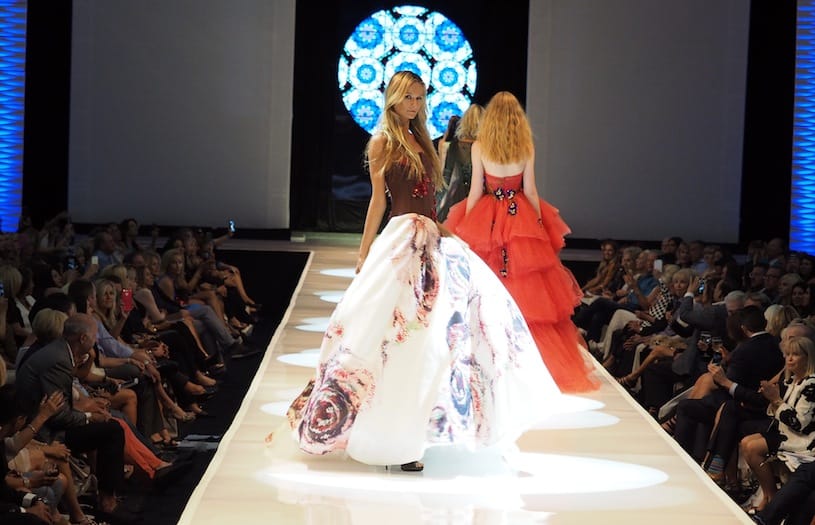 Whereas some designers see the female form as a means by which to sculpt their artistic visions, designer Monique Lhuillier sculpts her looks around the artistry of the female form itself.

The line unveiled on the opening night of Fashion Week El Paseo on April 2 ranged from her well-known wedding silhouettes (full skirts, lots of tulle, back revealing, and strategically placed embroidered flowers), to flowing Bohemian peasant dresses and off-the-shoulder prairie tops in shimmering silk and diaphanous cotton fabrics rather than the polyester structured flare of the 70s.

Lhuillier also pays tribute to the 80’s glam-rock look made popular by Madonna and her legion of fashion followers. Midi-length taffeta skirts with floral patterns that make the dresses reminiscent of Chinese vases make the trend uniquely contemporary. Instead of tucking your black leotard into your white cotton Esprit skirt and lacing up your combat boots, the models wore shiny stiletto heels with glittery ankle socks.

Although there was a flutter of applause from the front row for the tight trumpet skirt gowns in deep shades of green and blue, as well as the ever popular screen siren red, Lhuillier has a special gift for making modesty sexy. Almost every look showcased the shoulders, back and waist – the “magic V” of the hourglass shape coveted by so many.

Structured jackets highlighted a nipped waist, while a black, long-sleeved blouse with a sheer back, or an off the shoulder or strapless dress revealed only a bit more of the form underneath. No micro-minis or crop tops here. The occasional dropped waist dress was never left plain, but covered in petals that seem ready to flutter away from the fabric.

The result felt romantic and ethereal, and although few of her designs (even those that might be called “office glam”), are designed for casual wear, most of them would flatter most women, not just the stick-figured form seemingly favored by most of the fashion world. These are clothes for grown up women, not just girls. Even the final dress, a playful white dress as full as an 80s prom number, with just as much bounce and a requisite pink floral design, appeared both sophisticated and accessible on the statuesque model.

The full-to-capacity tent was clearly disappointed that the designer herself did not appear in person to present her line. Yet the atmosphere was charged with excitement and anticipation that such a talent as Lhuillier was opening the valley’s premier fashion event.

It was strange, therefore, when the models came out for their final walk en masse, that those attending did not give a standing ovation for a designer who clearly deserves the recognition and the accolades.