The personification of a formal Moorish estate complete with gardens, the home of John McCoy and Larry Colton snugs up against the mountains in the South Palm Springs neighborhood of Andreas Hills. But rather than impose itself on the oversized triangular lot, the aesthetics here result in an unexpected and carefully curated 4,200-square-foot retreat that projects a serene and relaxed co-habitation with its less-refined desert surroundings.

McCoy, who grew up in San Marino, and Colton, a third-generation San Franciscan, built the home in 2007. They drew upon their love of Spanish and Mediterranean Revival architecture, blending that with design ideas they imported from visits to Morocco, India’s Taj Mahal, and the Moorish palace and grounds, the Alhambra, in Southern Spain.

The home itself asserts a big-city pedigree with Los Angeles architects Tichenor & Thorp at the helm and Fisher Weisman of San Francisco providing the bespoke interiors. “Andrew Fisher and Jeffrey Weisman are friends of 30 years, and they’ve decorated all of our prior homes in the Bay Area,” including their last urban dwelling, a medieval castle with turrets and all in Pacific Heights, Colton explains.

McCoy, who serves on the Palm Springs Architectural Advisory Committee and owns Poolside Retreats, a vacation rental and property management firm, had an earlier career in landscape architecture that became critical to the geometry of their current Moorish home and its surroundings. “There is a primary axis and the grounds unfold from it,” he explains about the striking symmetry that visitors see when walking from one space to the next. “Everywhere one looks there are opposing patterns and geometric designs that add beauty and intricacy to each room.” He was so meticulous in planning that when Colton, a retired insurance executive who serves on numerous corporate and nonprofit boards, couldn’t visualize the end result, McCoy created a miniature model of the house to scale, and the project moved ahead to a most satisfying result for both of them.

The earthy brown entry gate, a star pattern inlaid into its wooden façade, is tucked unobtrusively into a pyracantha hedge, commonly known as firethorn for its bright red berries. Once through, guests are immediately drawn to the deep, ruddy blush of the home’s stucco facade, as lively as a Moroccan sunset, that’s capped off with a verdant barrel tile roof. Imported from India, red sandstone tile floors laid in a variety of patterns both inside the home and outside around the pool, complement the look. 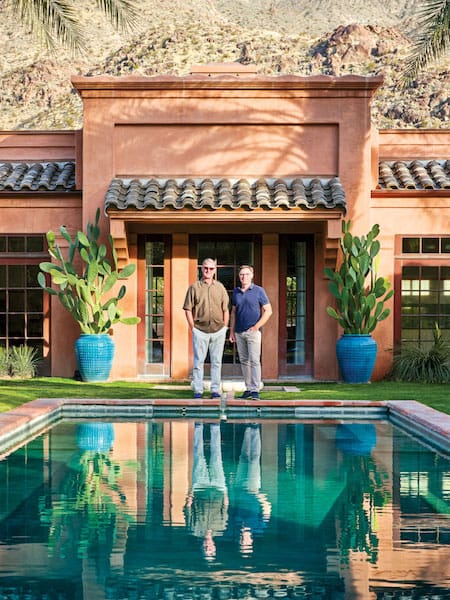 Owners Larry Colton, left, and John McCoy, are reflected in their pool, the showpiece of their home’s courtyard, that they designed for swimming laps.

Tall landscape lights carved from Indian sandstone, an idea borrowed from a hotel in Jaipur, dot the grounds, providing vertical sculptural appeal and subtle illumination so as not to upstage the endless expanse of night sky.

The Moorish home’s cream-colored, Venetian plaster walls convey the Old World patina the homeowners desired. The metal and glass lanterns, drawing the eye upward in the living and dining room, were purchased abroad, found stateside in consignment shops, or obtained from Berbere World Imports in L.A. It’s as if visitors have wandered into a tasteful Moroccan souk, or market, as they take in the rich sienna, spicy nutmeg, soft sage, and buttery yellow color palette in fabrics and adornments. 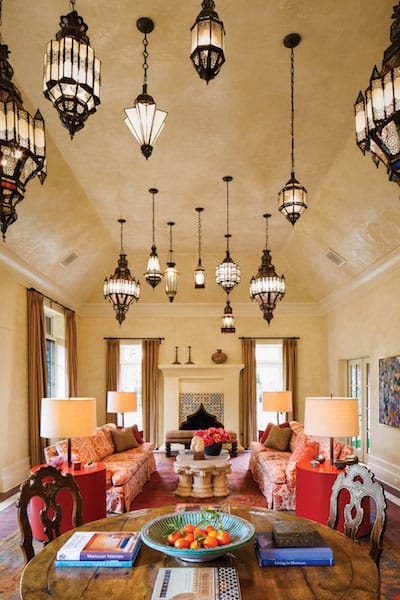 A spectacular array of cut metal and glass Moroccan lanterns hangs from the 13-foot living room ceiling, extending at varying lengths. In the evenings, when lit and with the arched fireplace ablaze, the generous space is bathed in a cozy glow. 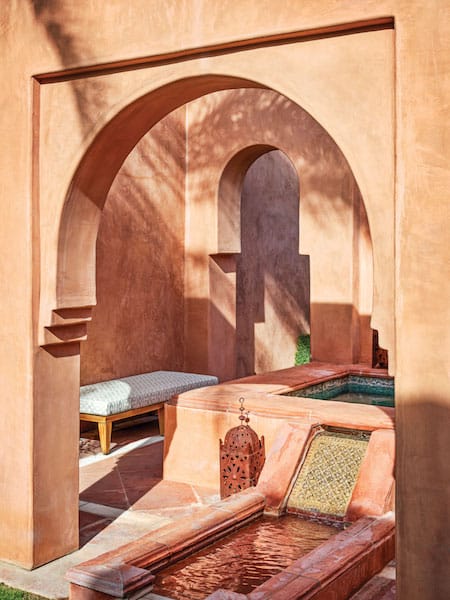 The arched keyhole opening seen here in the spa area, repeated throughout the home, evokes the Moorish influence while casting soothing shadows.

An assortment of star designs appears in the fireplace surrounds, the tiles hand cut and imported from Morocco, adding a cacophony of color and patterns that offer homage to the sights and sounds of that country. “We’ve used the eight-point star prominently here as a nod to the symbol that’s so central to the Moorish culture,” McCoy says. Linear geometric shapes, too, are repeated throughout the grounds and home. “We saw a design on a tabletop at a hotel in Udaipur and had it replicated as a medallion by a local tradesman there,” Colton says. “We knew the black and white marble inlay belonged in our entry floor.”

Wandering the property evokes a stroll through an ancient olive grove that’s somehow married to a sprightly Southern California fruit orchard loaded with citrus and pomegranate trees. However, it’s the story of how the olive trees arrived here, their trunks a study of deep crevices, twists, and turns as if painted by Van Gogh himself, that provides a visual delight.

“My college friend had access to the trees, most about a century old, that had been part of the Lindsay Olive orchard — you know, the olives we put on the ends of our fingers when we were kids — and they were going to be destroyed,” McCoy recalls. “So we had them brought here from the Central Valley on flatbed trucks. 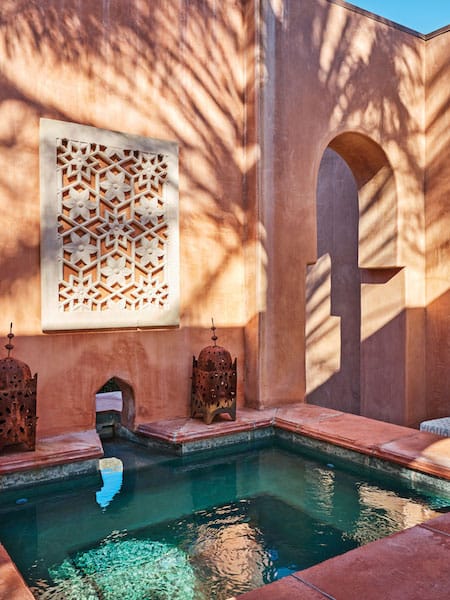 The "jali" that hangs above the outdoor spa is a carved stone screen typical of Indo-Islamic architecture; the screens are used as decorative pieces in various exterior locations.

The stucco facade is as lively as a Moroccan sunset. 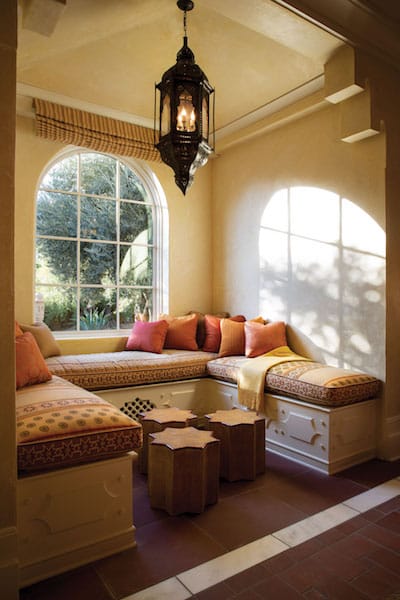 A spacious and comfortable reading nook anchors the west façade of the living room and beckons visitors to relax, while offering a perfect view of the grounds, mountains, and beyond. 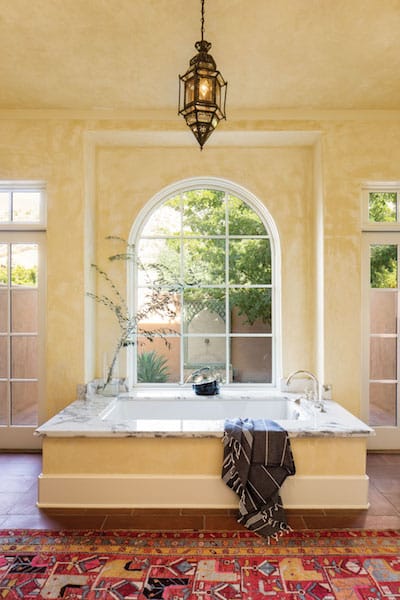 The master bath soaking tub, topped by Carrara marble, faces a private courtyard and garden with an outdoor shower.

Wandering the property evokes a stroll through an ancient olive grove.

Colton continues the tale. “The tree trunks had to be cut down dramatically to fit under highway overpasses, so here comes this caravan of trucks up our street, with two huge trees per truck, and they were lifted onto our lot by crane. Once they were planted, they reminded me of a scene from The Lord of the Rings!” he adds, laughing. While McCoy had always seen the possibilities of the gnarled stumps, Colton admits that their growth into full-figured beauties taught him a new brand of patience.

Built with purpose for these two homebodies, there are seven reading areas or nooks throughout the Moorish house and property. Fragrant roses and majestic date palms are scattered generously about, and one can find a secret garden residing alongside a raised plot for growing food. (“John designed the garden that way, so I wouldn’t hurt my back when I’m picking tomatoes and fresh vegetables,” Colton says.) There is a guest room and a casita. However, the emphasis here is not on entertaining, but reflection and quality time, which are this couple’s credo. 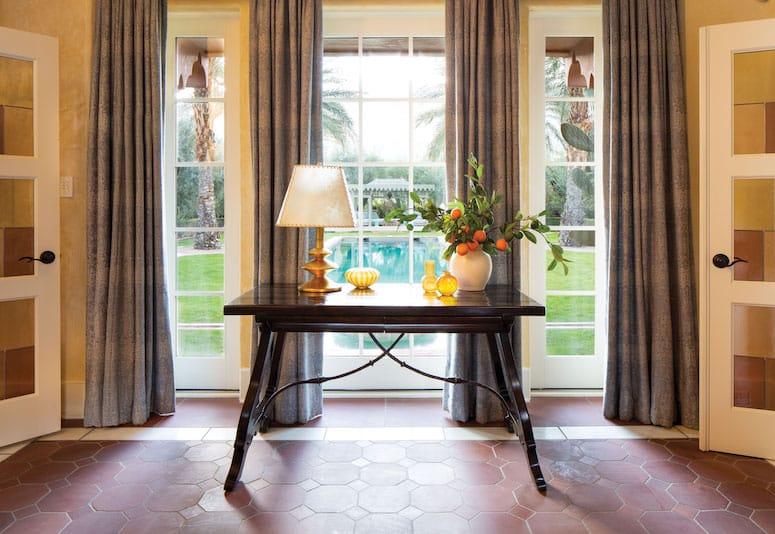 This Michael Taylor-designed Portuguese writing desk provides an idyllic spot looking out to the gazebo when Colton and McCoy work at home.

Colton and McCoy both say the final reveal after the house was completed was a day neither will forget, where the patterns, symmetry, and perfect spaces all intersected, making their dream a reality. With their love of India and its environs, it’s no accident that Urdu, the sister language to Hindi with its Persian and Arabic influences, offered them the perfect name for their new home: Villa Arzoo. Heart’s desire, indeed. 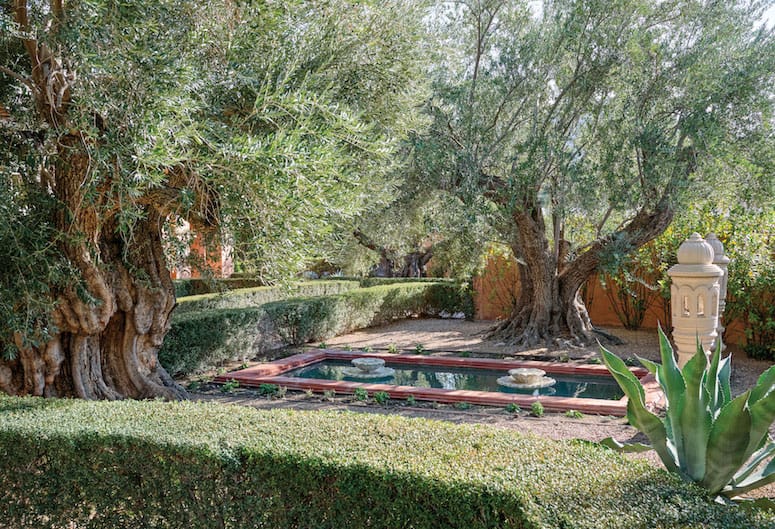 The ancient, gnarled olive trees surround a garden pond featuring delicate, white marble fountains that offer a cool respite in an arid landscape. The Moors were masters of designing with water, believing it was the link between this world and the heavens above.