The existence of several mortars in proximity to one another suggests that grinding was a social activity, with women conversing while preparing the day’s food. A large bedrock with multiple mortars is often referred to as “gossip rocks.”
ILLUSTRATIONS BY STUART FUNK

Before quartz, stainless steel, and butcher-block became the benchmark for every HGTV kitchen, there was rock. Pure, unprocessed rock that, with the right amount of heat, pressure, and muscle, could emerge as an ingenious kitchen utensil and workspace. Archaeologists have uncovered what are commonly known as bedrock mortars — small, circular depressions carved into rock or stone — all over the world, from the United States to Argentina to Israel. They are, to some degree, the chef’s kitchen of the ancient indigenous world. Such mortars exist in the Indian Canyons in Palm Springs and are the handiwork of the ancestors of the Agua Caliente Band of Cahuilla Indians.

Traditionally, while Agua Caliente men hunted deer, rabbit, and other small game, the women gathered plants and began the early stages of food preparation, using a mortar and pestle to grind nuts, seeds, and dried berries into a fine flour or meal, as well as various plants for medicinal purposes (not unlike our modern-day pharmacists).

In Mukat’s People, anthropologist Lowell J. Bean, Ph.D., suggests that animal bones may have also been ground and later mixed into food, such as soups.

The mortars seen today in the Indian Canyons, some of which are several inches deep, began as mere depressions or natural indentations in the rock face. A hot stone would have been placed on the area to soften the bedrock so the women could begin chipping away with a sharp stone. Over time, as they pounded and ground the same spot with a pestle, a smooth hole began to form.

Because of the length of time required to form these grinding sites, the Agua Caliente took great pride in their respective mortars. According to Bean, “any woman who was careless in her use of mortars was considered a ‘sloppy’ housewife.” After grinding, the women carefully cleaned their mortars with a small hand broom and covered them with grass to keep out small animals.

Like their modern-day counterparts of the same name, pestles made of rock or wood served as a useful tool to grind plants, animal bones, and dried berries into a fine meal or flour. The women often left them behind in the bedrock mortar after having finished.

Historically, each Agua Caliente family had its own mortar and, like the Tribe’s stories and hand-woven baskets, they were passed down from generation to generation. For instance, a daughter might inherit a mortar that had been started by her great-great-grandmother almost a century earlier. In many ways, these grinding sites are sacred because they represent the ancestors’ direct use of the area. 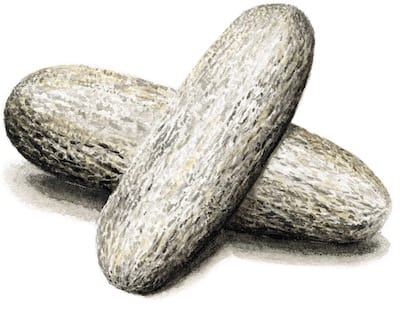 Discover a few staples of the early Agua Caliente cupboard.

Acorns
In the autumn, large family groups traveled to higher elevations to gather acorns in the oak groves. Once dried, the acorns were cracked open and the inner kernels ground into a fine flour. The women then poured warm water over the flour to leach out the acorn’s bitter tannic acid, a process that could take several hours. Sometimes, if a bedrock mortar was still shallow, a bottomless basket known as a “hopper” was placed around the hole to retain as many broken pieces of the acorn as possible, redirecting the material back into the mortar.

Honey Mesquite
Mesquite, one of the most important plants the Agua Caliente harvested, provided the Tribe with not only food but also building material, firewood, and makeshift sewing needles (thanks to its thorns). When not eaten fresh, the seedpods were ground into a powder and mixed with water to form a drink or porridge. The women harvested these pods in the summer months and stored excess in ollas, or clay pots, for the coming year.

Hollyleaf Cherry
The women crushed the kernels of the plant’s dried cherry fruit and ground them into a meal. Before boiling the flour into atole, a thick hearty drink, they had to leach the flour in a sand basket to remove any poison, which is common among all Prunus shrub species.

Buckthorn/Cascara
The bark of the coffee berry (so named because of its resemblance to coffee beans) was stripped off the plant, dried, and ground in the bedrock mortars.

Willow/Black Willow
Once dried, the leaves were ground into a pulp, which would later be steeped in water for several hours.

Cat’s-claw
Also known as the “wait-a-minute” bush, the plant has pods that were dried and ground into flour.

Desert Mistletoe
The women would have ground the plant’s leaves and mixed the fine powder with water to create dye.

This story originally appeared in MeYah Whae, The Magazine of the Agua Caliente Band of Cahuilla Indians, Spring/Summer 2020. To read the current digital edition, click HERE.