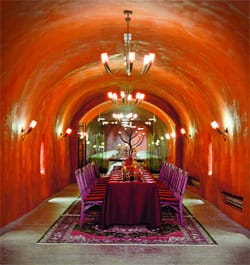 Wine cellars remain a popular use for today’s private, residential cave. Add to the list screening rooms, formal dining rooms, romantic hideaways, and den retreats and you can understand why so many people are asking Napa-based Bacchus Caves to dig up something special. In addition to caves along the California coast, “we’re working on two in Georgia, one in Tennessee, and a guy in British Columbia recently inquired about an entire underground house. We were even contacted about creating a bowling alley cave in New Jersey,” says president Dave Provost. Clearly, the company’s motto, “Anything is possible underground,” is true — though sometimes that “anything” can be slow and costly. The firm has not tackled a cave in the Coachella Valley, but they’re ready to break ground on the first. “My understanding is that in an earthquake caves are safer than aboveground buildings because they’re supported on all sides. The cave moves with the ground.” (The company’s engineers can go into more detail.) They’re hidden, they’re hip, and even in the dead of summer, a cave — whether accessed by a dramatic staircase or an elevator off the main house — feels as comfortable as a cool spring day. Most naturally maintain a temperature in the high 50s to the high 60s.

To get started, Bacchus Caves needs  a topographical map of the site and a wish list of your deepest, underground desires. The average cave in good ground conditions ranges $120-$300 a square foot and averages four to five months from concept to cave. Information: (707) 251-1402— Lisa Marie Rovito