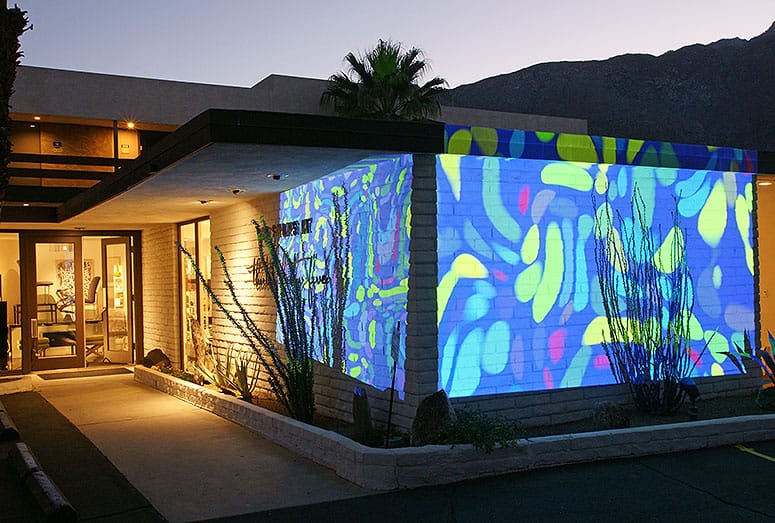 The biography of Lucia Grossberger Morales is fascinating and worthy of examination. She was born in Catavi, Bolivia during the Revolution of 1952. In 1955, her family emigrated to the United States. Lucia grew up in Southern California. She received her B.A. in Anthropology and her M.S. in Instructional Technology from the University of Southern California.

When she was nine watching the family's new, color television she wondered why paintings don’t also move and change. That was the beginning of her pursuit to create painting that moved and transformed. In 1979, Lucia saw the Apple II Computer. That night she had a powerful dream. In the dream she had found a black box embedded in the sand next to the ocean. When she opened the box small dots of light burst out and danced in the night sky. At that moment, she knew the computer would be her artistic medium. Inspired by her dream, she sold the house she had bought the year before and with the profits bought an Apple II computer and the time to learn to communicate with it. Throughout her life Lucia has listened to her dreams and when they seemed right, even though they defied rational thought, she followed them. She intuitively knew it was possible to create moving paintings on computers because it is possible to control every dot on the screen from one frame to the next. Lucia was one of the pioneers of interactive digital art and one of the first Latina computer artists.

Lucia created her first series of Moving Paintings on the Apple II in 1980. The Apple II was primitive with only six colors and the resolution was equal to about an inch of current computer monitors. But, the Moving Painting “The Dream I Had Last Night” was powerful as faces transformed from a little girl, to a group of men, to a monkey and finally to a group of people with glowing eyes.

Lucia spent the 80s and early 90s participating in the vibrant and supportive atmosphere of the Silicon Valley. In 1982, she coauthored the Designer’s Tool Kit a graphics program published by Apple Computer, Inc. In 1987, she coauthored AppleVisions: A Unique Approach to Assembly Language Programming. Steve Wozniak, the inventor of the Apple II computer, wrote the Foreword.

In the early 90s, Lucia created installations for concerts and performances including Peter Gabriel’s WOMAD (World of Music and Dance) and Lollapalooza.

In 1987, when she was teaching a course of Computer Art at the University of California, Santa Cruz, she saw Benoit Mandelbrot speak. Mandelbrot spoke of a geometry whose numbers could generate realistic mountains, the sky, leaves, in other words these numbers described the natural world, the numbers of nature. She was speechless. Numbers took on a new meaning. From that moment on, they became an important element of her visual vocabulary. Fractals images were used by scientists and filmmakers for special effects. Lucia knew that she would use Fractals to create her new Moving Paintings. These numbers would be the elements she would use to create the abstract images that were starting to brew in her imagination.

It is almost twenty five years since Lucia first became fascinated with fractals and numbers in art. Though she has used computers to create art for over thirty years, her approach to her computer imagery reflects her work as a painter. During that time she spent four years experimenting with acrylic paints and mixed media. She spent many years exploring the equations to create the Moving Paintings she saw in her imagination.

Lucia splits her time between Palm Springs and Camarillo, where she has a studio at Studio Channel Islands Art Center.