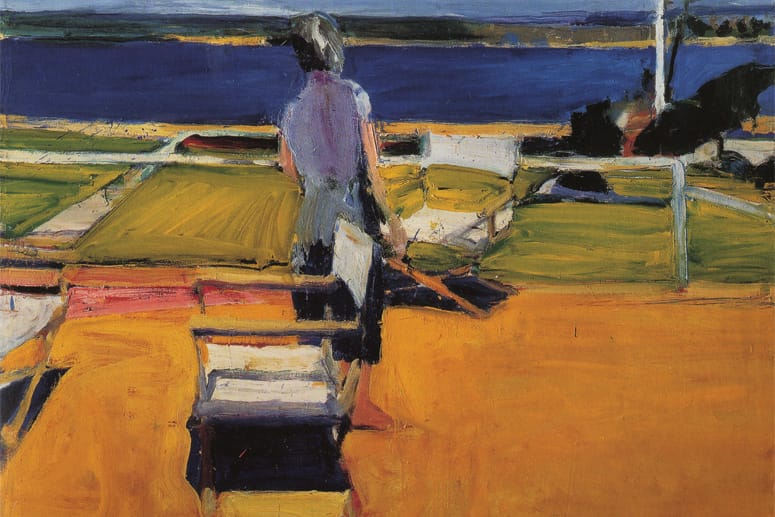 Do you prefer your paintings abstract or figurative?

Whichever way you answer, Richard Diebenkorn: The Berkeley Years, 1953-1966 at Palm Springs Art Museum will satisfy in a big way.

Diebenkorn, one of California's – and America's – most significant postwar artists, depicted landscapes and figures with the flair of the Abstract Expressionists. Influenced by Clyfford Still and Mark Rothko, who taught at California School of Fine Arts in San Francisco, Diebenkorn spent a brief time in New York when Willem de Kooning, Jackson Pollock, Franz Kline, and others were at their productive peaks. Art history would canonize the younger Diebenkorn among them.

The Berkeley Years reveals the critical period between his return to the San Francisco Bay Area in 1953 and his 1966 move to Los Angeles, where he taught at UCLA and painted his epic Ocean Park series. During this time, Diebenkorn switched abruptly from abstraction to figuration, retaining the spirit of one tradition and pushing the boundaries of the other.

"The Berkeley years should not be seen as comprising two discrete chapters – abstract and representational – but rather as encompassing an oscillation between these seemingly opposite poles," Burgard suggests in his exhibition catalog essay. "Diebenkorn's intense physical engagement with his Abstract Expressionist works drew strength and power from the sublimation of their figurative elements, while his deep psychological involvement with his figurative works was alternately amplified or tempered by their abstract elements."

Other factors influencing the change, according to Nash, were Diebenkorn's interest in Henri Matisse and Pierre Bonnard, as well as Edgar Degas and  the German Expressionists, and his newfound concern for the psychology
of his own paintings.

The paintings in The Berkeley Years demonstrate how Diebenkorn became adept at constructing space. He mastered this concept in the Ocean Park series, which are famously abstract, but with relationship to the landscape of Santa Monica.

The exhibition, which continues through Feb. 16, 2014, is the first to focus on Diebenkorn's dramatic and controversial shifts of style. It includes his "Berkeley landscapes" – drawings and watercolors that synthesized the elements of the striking landscape vistas of the Bay Area, with their dramatic plunges, lush greens, and rich light – as well as lesser-known figurative works.

"Throughout his work, there is an undeniable dialogue between these opposing principles, even when his stylistic balance shifted strongly in one direction or the other, as it did in the figurative period," Nash writes in his exhibition catalog essay, which holds that the Berkeley years have "… become the most frequently examined aspect of his [Diebenkorn's] career."