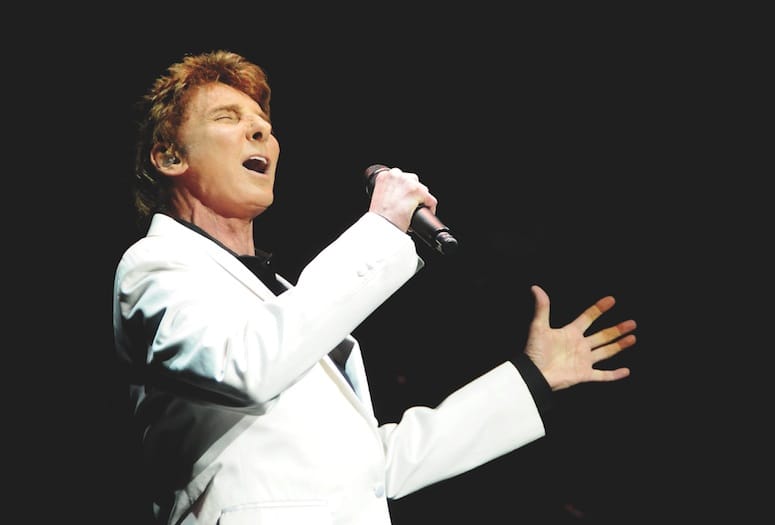 Shaking his trademark tow head and cracking himself up, the Grammy, Tony and Emmy award– winning 72-year-old Palm Springs resident of 18 years is barely joking. He looks pop-star perfect in a royal blue dress shirt in the local Hard Rock Hotel’s purple-on-purple Rock Star Suite — the ideal interview location for a music business legend who has written, arranged, produced, and sold more than 80 million records during his more than 50–year career.

The Brooklyn-born crooner explains that he awakens by 4 a.m. every day. The man who, per one of his signature hits, “writes the songs that make the whole world sing” has so much music yet to produce.

“And it’s a good thing I wound up successful in music, because if I didn’t do this, I’d be in trouble,” he says. “Because I don’t know how to do anything else. And it’s really all I’m interested in. You’d think, after all these years, I’d have found all the colors that interest me — I’ve recorded pop, big band, Broadway, jazz … everything — but there’s always something more I haven’t done.” On the heels of last year’s My Dream Duets and the Grammy-nominated Night Songs (both of which were in the top 10 of Billboard Magazine’s Top 200 Albums), Manilow is at work on yet another album (“half original songs and half standards,” he discloses). He has completed five months of sold-out U.S. arena shows this year with the “One Last Time!” tour that he’ll take to Britain next summer. But, first, he’ll be donating his showman services to benefit 30 Coachella Valley charities with the Christmas-themed, “Gift of Love III” concerts at Palm Desert’s McCallum Theatre Dec. 8, 9, 11, 12 and 13.

“This is the third time I’ve done the “Gift of Love” shows [incarnations of which were performed at the McCallum in 2009 and 2012, raising more than $1 million] and it’s great to give back to this community, because I love it here. I love the people, the vibe … and the no traffic!,” he says with another laugh.

One of the charities benefiting from the concert series is his own Manilow Music Project which, besides funding vastly depleted public school music programs, donates a piano in every city where he plays. He also tempts his “fanilows” with two free tickets in return for each used instrument donated that otherwise might be collecting dust in the attic.

“I was shocked to find the condition music classes in schools were in and thought, ‘How can I help?’ Now, we’re getting, like, 75 to 100 instruments in each city! We fix them up and give them to the school districts to disperse. It feels great to do something that’s helpful in the world of music for young kids, because music can change kids’ lives. It sure did mine. Listen, in the slums of Brooklyn where I grew up, it was a choice of a gang or the orchestra, and because I was a skinny malink who couldn’t fight my way out of a laundry bag, I joined the orchestra. I felt grounded then, my grades went up and I found friends. Man, I loved being in that music class.”

The Dec. 12 “Gift of Love III” show falls on the centennial of Frank Sinatra’s birth. Manilow’s good friend, Sinatra’s widow, Barbara, will be present that night. The Barbara Sinatra Children’s Center is one of the show’s beneficiaries. Manilow promises he’ll sing the beautiful, wintry, “Violets for Your Furs,” especially for her. “Frank recorded it on an early album [1954’s “Songs for Young Lovers”] and I’d always loved it, so I put it on one of my [four] Christmas albums,” Manilow says. “I went to Barbara’s for dinner one night and brought the CD. When she heard that song, I saw tears running down her face. She told me that she remembered when Frank had taken her to Rockefeller Center to see the Christmas tree and he brought her violets and pinned them to her coat just like in the song.” Sinatra has long loomed large in Manilow’s life, perhaps most famously in the ‘70s when his superstar-making string of hits including “Mandy,” “Copacabana (At The Copa),” and “Can’t Smile Without You” were ruling the charts, but not winning the hearts of critics. Ol’ Blue Eyes himself let loose with a now-famous quote to the media regarding Manilow consisting of just two words: “He’s next.”

“Yes!,” exclaims Manilow, his own baby blues popping at the memory. “Well, ya know, first, when he said that, I thought, ‘Jesus what did I do? Am I gonna find a horse head in my bed?’

“But, no, seriously, that was the year I really needed somebody to say something like that, because I was getting creamed by the critics. I’d become annoyingly popular and nothing I could do pleased them, be it my name, my looks, my sound, my performances. They killed me. And it was years of this. And then, out of nowhere, Mr. Sinatra said that beautiful thing, ‘He’s next.’ And it just … well, I was very, very grateful that happened — he never needed to say anything else about me ever again!”

Although he met Sinatra only a couple of times in the early ’80s for, he says, “like, 30 seconds,” (during which, Manilow adds, he was so starstruck he could hardly speak), Manilow returned the love by recording his impeccably arranged 1998 tribute album, Manilow Sings Sinatra. “When, as a kid, I’d first heard Sinatra, I was a musician only — I had no intention of singing — and what I connected with the most then were the brilliant arrangers behind him: Nelson Riddle to Neil Hefti to Don Costa. Their arrangements fit him like a … glove!”

When he became a singer, it was Sinatra’s fabled interpretation of song lyrics that Manilow says informed his early performances, whether the critics could see it or not. “Sinatra really acted a lyric — when he was sad, he was so sad, when he was happy, he was so happy — and that’s how you connect with an audience: You tell the story of the lyric you’re singing. And I think I did that, even in the very beginning when I was an awkward goofball. When I sat at the piano I knew where I was and when I sang the lyrics I knew what I was singing about. And that’s what audiences connected with.

“See, if you do it for the fame or do it for the money, it’ll never be enough. You’ll always be unhappy. You’ve gotta love the work. And then you’ll probably become successful, because you’ll do the best work you can do!”

He taps the table and says — not unlike a certain Chairman of the Board might have done — “OK, you’ve got enough [for this interview],” then stands and heads toward the suite’s exit.

Earlier, when asked about details of the “Gift of Love III” shows, he’d said, “Oh, man, that’s so far away, I haven’t figured it all out yet.” But now, realizing that those dates would be here in a flash, Manilow’s on a mission. “I’ve gotta get going on this. I’ve gotta start making some phone calls now!” he says. And with that, the music man and philanthropist is out the door.